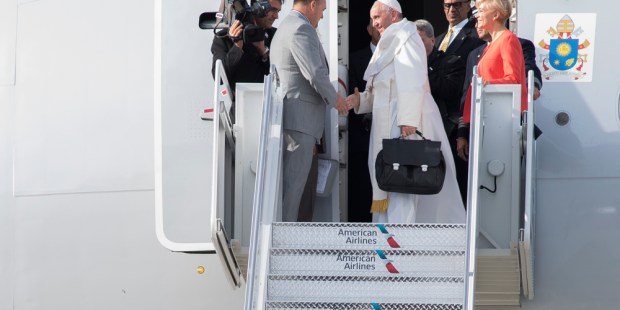 He stumbles, but recovers with a smile.

Never mind Rocky’s triumphal strut up the steps of the Philadelphia Museum of Art, Pope Francis had his own, hard-earned moment yesterday as he ascended the stairs to his Philly-bound plane. But not before getting a taste of home—courtesy of nuns from the Monastery of Saint Edith Stein in Brooklyn, NY.

Twenty minutes late and with a plane to catch, he did not have time to greet the hundreds gathered at Hangar 19 of John F. Kennedy International Airport for his 8:40 a.m. scheduled departure. As he disembarked from a Marine helicopter, the crowd—conducted by Msgr. Jamie Gigantiello—burst into chant: “We are family. I got all of my sisters with me.”

Six nuns of the Servants of the Lord and the Virgin of Matará, habited in royal blue scapulars over grey tunics, greeted him with gifts: A bouquet of white roses, a cross of the Virgin of Matará, a special straw known as a bombilla to drink tea known as mate and a massive platter of cookies. The flowers were a spiritual bouquet inspired by Saint Therese of the Little Flower to remind the pope that his prayers are heard. The alfajores cookies are an Argentinian specialty. Like the pope three of the nuns hail from Argentina. Also on the tarmac, seven Brooklyn bishops and New York’s archbishop, Cardinal Timothy Dolan, bid farewell to the pontiff.

After Pope Francis asked those clustered around him for more prayers he climbed the stairs to the American Airlines Boeing 777. Gravity seemed to be getting the better of him as he stumbled and nearly foundered. The crowd hushed except for one who emphatically yelled, “Francis, we love you!”

Questions swirled among the press about the rigorous schedule of the seventy-eight-year-old. As he reached the top platform he flashed a smile. Once aboard and with the plane taxiing forward he waved to everyone from his window seat—a humble version perhaps of Rocky’s antics at the top of Philadelphia’s famed steps.