Synod Fathers: From Hollywood to Gender Ideology to ISIS 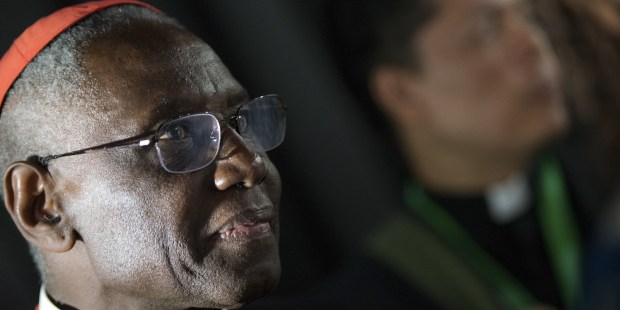 VATICAN CITY — Two newly released interventions by Synod Fathers offer insight into the gravest threats facing the family today, and unite in calling for a rediscovery of the beauty of Christian family life and the transforming power of the Gospel.

Expressing deep reservations over certain synodal procedures, Cardinal Robert Sarah advised the body to “help the Holy Father to enunciate clearly certain truths and useful guidance on a global level,” as “gender ideology and ISIS” spread across the globe assailing humanity from opposite poles: “On the one hand, the idolatry of Western freedom; on the other, Islamic fundamentalism: atheistic secularism versus religious fanaticism.”

Cardinal Sarah serves as the Prefect of the Congregation for Divine Worship and the Discipline of the Sacraments. On Monday he released jointly to Aleteia and the National Catholic Register the intervention he delivered at the opening general congregations of the Synod.

“What Nazi-Fascism and Communism were in the twentieth century, Western homosexual and abortion ideologies and Islamic fanaticism are today,” the Cardinal said in his strongly-worded intervention. “The church must promote a true “epiphany of the Family,” he added, “…for the marriage crisis is essentially a crisis of God, but also a crisis of faith…”

Archbishop Jose Gomez of Los Angeles, while citing the “virtual world” of Hollywood movies, television shows and fantasy sports as major contributing factors to the crisis in the family, wove a similarly threaded message: “Our culture has lost its sense of the meaning of the human person and creation. This loss is rooted in the loss of God.”

Counseling a renewed appreciation of the human person, Archbishop Gomez, in his intervention of October 10, recalled Pope Francis’ visit to the US and his reminder that “God entrusted his loving plan for creation to the family.”

“This divine Word is the authentic starting point for understanding the family’s vocation and mission,” he said.

The Los Angeles Archbishop voiced his belief that “we must proclaim the beauty of God’s plan of love for creation, for the human person, and for the human family.”

Also on October 10, Aleteia spoke with the Cardinal Sarah following a meeting of the bishops of Africa. The Guinean cardinal voiced his concern about three controversial paragraphs being included in the Instrumentum laboris, saying that by retaining the paragraphs which did not receive a two-thirds majority at last year’s meeting, he believes “there is an agenda they are trying to impose.”

He also expressed his opinion that the starting point of the synod’s working document was “somewhat mistaken” in beginning with modern difficulties rather than “God’s plan for the family.” But he added that, in the first week: “I saw that the Holy Spirit was guiding it well.”

The cardinal therefore encouraged the faithful to pray, especially as “the gravest and most serious point is the third part.”

“There are still bishops’ conferences — some, not all — in the West that want to open the doors [to everything], but they are few. The bishops of the East, Africa, and America are orthodox. But the few who are are insisting, with the help of the media.”

Here below we publish a translation of the full text of Cardinal Robert Sarah’s intervention, followed by the full text delivered by Archbishop Jose Gomez, preserving the emphases indicated in the original text.

Text for Synod on the Family, October 2015

Your Holiness, Your Eminences, Your Excellencies, participants of the Synod,
I propose these three thoughts:

1) More transparency and respect among us

I feel a strong need to invoke the Spirit of Truth and Love, the source of parresia in speaking and humility in listening, who alone is capable of creating true harmony in plurality.

I say frankly that in the previous Synod, on various issues one sensed the temptation to yield to the mentality of the secularized world and individualistic West. Recognizing the so-called “realities of life” as a locus theologicus means giving up hope in the transforming power of faith and the Gospel. The Gospel that once transformed cultures is now in danger of being transformed by them. Furthermore, some of the procedures used did not seem aimed at enriching discussion and communion as much as they did to promote a way of seeing typical of certain fringe groups of the wealthiest churches. This is contrary to a poor Church, a joyously evangelical and prophetic sign of contradiction to worldliness. Nor does one understand why some statements that are not shared by the qualified majority of the last Synod still ended up in the Relatio and then in the Lineamenta and the Instrumentum laboris when other pressing and very current issues (such as gender ideology) are instead ignored.

The first hope is therefore that, in our work, there by more freedom, transparency and objectivity. For this, it would be beneficial to publish the summaries of the interventions, to facilitate discussion and avoid any prejudice or discrimination in accepting the pronouncements of the synod Fathers.

2) Discernment of history and of spirits

A second hope: that the Synod honor its historic mission and not limit itself to speaking only about certain pastoral issues (such as the possible communion for divorced and remarried) but help the Holy Father to enunciate clearly certain truths and useful guidance on a global level. For there are new challenges with respect to the synod celebrated in 1980. A theological discernment enables us to see in our time two unexpected threats (almost like two “apocalyptic beasts”) located on opposite poles: on the one hand, the idolatry of Western freedom; on the other, Islamic fundamentalism: atheistic secularism versus religious fanaticism. To use a slogan, we find ourselves between “gender ideology and ISIS”. Islamic massacres and libertarian demands regularly contend for the front page of the newspapers. (Let us remember what happened last June 26!). From these two radicalizations arise the two major threats to the family: its subjectivist disintegration in the secularized West through quick and easy divorce, abortion, homosexual unions, euthanasia etc. (cf. Gender theory, the ‘Femen’, the LGBT lobby, IPPF …). On the other hand, the pseudo-family of ideologized Islam which legitimizes polygamy, female subservience, sexual slavery, child marriage etc. (cf. Al Qaeda, Isis, Boko Haram ...)

Several clues enable us to intuit the same demonic origin of these two movements. Unlike the Spirit of Truth that promotes communion in the distinction (perichoresis), these encourage confusion (homo-gamy) or subordination (poly-gamy). Furthermore, they demand a universal and totalitarian rule, are violently intolerant, destroyers of families, society and the Church, and are openly Christianophobic.

“We are not contending against creatures of flesh and blood ….” We need to be inclusive and welcoming to all that is human; but what comes from the Enemy cannot and must not be assimilated. You can not join Christ and Belial! What Nazi-Fascism and Communism were in the 20th century, Western homosexual and abortion Ideologies and Islamic Fanaticism are today.

3) Proclaim and serve the beauty of Monogamy and the Family

Faced with these two deadly and unprecedented challenges (“homo-gamy” and “poly-gamy”) the Church must promote a true “epiphany of the Family.” To this both the Pope (as spokesman of the Church) may contribute, and individual Bishops and Pastors of the Christian flock: that is, “the Church of God, which he has obtained with his own blood” (Acts: 20:28).

We must proclaim the truth without fear, i.e. the Plan of God, which is monogamy in conjugal love open to life. Bearing in mind the historical situation just recalled, it is urgent that the Church, at its summit, definitively declare the will of the Creator for marriage. How many people of good will and common sense would join in this luminous act of courage carried out by the Church!

Together with a strong and clear Word of the Supreme Magisterium, Pastors have the mission of helping our contemporaries to discover the beauty of the Christian family. To do this, it must first promote all that represents a true Christian Initiation of adults, for the marriage crisis is essentially a crisis of God, but also a crisis of faith, and this is an infantile Christian initiation. Then we must discern those realities that the Holy Spirit is already raising up to reveal the Truth of the Family as an intimate communion in diversity (man and woman) that is generous in the gift of life. We bishops have the urgent duty to recognize and promote the charisms, movements, and ecclesial realities in which the Family is truly revealed, this prodigy of harmony, love of life and hope in Eternity, this cradle of faith and school charity. And there are so many realities offered by Providence, together with the Second Vatican Council, in which this miracle is offered.

The Word of God reveals our Creator’s plan for his creation and for human history. This divine Word is the authentic starting point for understanding the family’s vocation and mission.
As the Instrumentum Laboris (nos. 39, 44), recognizes, we can discern a “divine pedagogy” in the history of salvation that unfolds in the Sacred Scriptures.

To strengthen marriage and the family in our time, I believe the Church must recover the divine pedagogy found in the Scriptures. Just a few weeks ago, when he was in the United States Pope Francis reminded us again — that God entrusted his loving plan for creation to the family.

And as I see it, the crisis of the family in our time is, to some extent, a crisis of anthropology. Our culture has lost its sense of the meaning of the human person and creation. This loss is rooted in the loss of God.

My perspective is shaped by my experience as the Archbishop of Los Angeles. The family of God in Los Angeles is made up of people from every continent and nationality.

Los Angeles is also the home of Hollywood — the place where the “virtual world” of movies, television programs, fantasy sports and all kinds of media products are created. So Los Angeles has a great influence on the perception of the human person and the family in contemporary society.

The Church needs to recover and reflect on the “family” images found in the Scriptures and most ancient Tradition, and in the universal Church’s liturgy and popular piety:

In the face of the widespread crisis of the family, I believe our society needs to hear once more the beautiful truth about the human person and God’s loving plan for creation and history, a plan that is centered in the family.

Counting on the intercession of the Holy Family we need to illuminate, by our pastoral priorities and practice, how the family is the crucial “way” for the Church and for God’s plan for human society

And in the words of our newest American saint, St. Junipero Serra, we will go, siempre adelante!

Thank you very much.