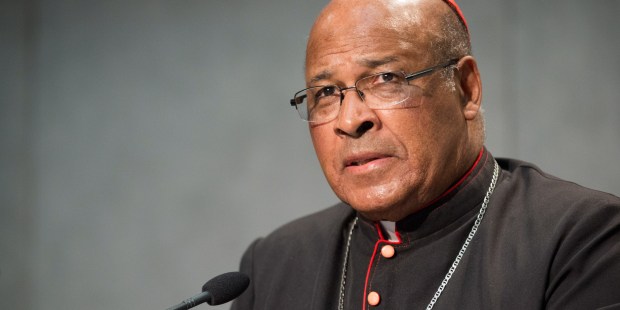 The Roman saying holds true: there’s “always something new out of Africa”

VATICAN CITY — Cardinal Wilfrid Fox Napier, co-president of the Ordinary Synod on the Family, said Tuesday that last year’s extraordinary session of the synod was “being pushed in a certain direction,” but African bishops have a “sense of optimism” at this year’s meeting.

During a midday press briefing on the synod, which ends Sunday, the Archbishop of Durban also clarified the nature of the private letter sent by 11 cardinals (and not 13, as originally believed) to Pope Francis, saying it was written in the spirit of what Pope Francis requested at the beginning of last year’s synod.

Cardinal Napier was asked, having endorsed a book that alleged last year’s meeting had been rigged, if he could point out what had changed in his mind to say he was now satisfied with the synod compared to last year’s assembly.

I think that the first thing to say is that there were certain individual items that were of concern at the last Synod and one of them was the presentation of the interim report as if it had come from the Synod, as if it was part of the Synod’s deliberations. And that was not true because we received it about an hour after you guys received it in the media. And we only then started reading it. And that document was saying things which I know were only said in the synod hall by at most 2 or 3 people, but it was presented as if they were the reflection of the synod. Now that certainly gives you the impression that the synod is being pushed in a certain direction.

He added: “I also served on the commission that was drafting the final document and there were certain issues, where once again, they were being pushed in a certain direction. So that’s the sense in which a particular ideology or agenda—whatever you want to call it—seemed to be in operation.”

Concerning the private letter of the “13” cardinals, which expressed concerns in 3 areas with regard to the synod and which was sent to the Holy Father on the eve of the synod meeting, Cardinal Napier said:

The letter you’re referring to: It was by the way a private letter between the cardinals and bishops to the Pope and was also written in the spirit of what Pope Francis said at the beginning at last year’s synod, when he said: please speak openly and honestly but listen with humility. It was sent to him in that spirit. He immediately responded by coming out with a statement which he made on the day after he received the letter. And that made a huge difference in the scale of confidence and of trust, that the concerns had registered, that they were being taken care of, and that from then one, everyone was going to work at the synod with all they’ve got. And I think that’s what I’ve experienced. And that has been why I feel this Synod takes up where the first week of the last one had left off, when we were all optimistic and looking forward to really working together on the issues as a team with the synodality that the Pope is so fond of, walking together as colleagues in the direction of what is best for the Church.

“Ex Africa Semper Aliquid Novi”—Always Something New out of Africa

Cardinal Napier began the press briefing by recalling that the Roman saying “ex Africa semper aliquid novi” (i.e., always something new out of Africa) wasn’t “just something that happened a long time ago.”

The cardinal went on to express, on behalf of the African bishops, his appreciation “to the many millions of laypeople who are praying for the synod, for the success of the Synod. I can say with a certain degree of certainty that we feel those prayers are helping us through some difficult moments in the Synod.”

He also said the African bishops found the “process was very helpful, because it gave us so much more time in small groups.” That allowed them to “learn from each other” and discover “what was going on in the different parts of the Church.” They were therefore able to affirm “the good marriages, all the good families,” in the world and in the Church, and it is these which “help us to understand where we need to go as a Synod.”

The African bishops were also glad that so much attention was given to the vocation of the family and its mission in the world today. He emphasized 5 points that we stressed in particular:

Marriage preparation as a process to help “discern and to identify” their vocation; the need to “accompany spouses” throughout their marriage not just by the priest but by other couples and movements, too; the need to train priests and laity so they can assist tribunals in streamlining the annulments process; the need to care for single-parent families, child-headed households because HIV/AIDS have taken parents’ lives, drug and alcohol addictions, and problems regarding sexual orientation. The cardinal also spoke of the need to incorporate into marriage preparation and the Sacrament of Marriage the African phenomenon of a couple living as man and wife before they are sacramentally married as a step toward marriage.

On the last point the Cardinal explained that the word co-habitation “doesn’t really fit in that instance because it’s part of the process of marriage, by steps if you like.” He said sometimes people use the word “arranged marriage” but it is “actually negotiated” in that the bride’s family is “to say what the dowry should be.” Saving for the dowry can take a long time, the cardinal added, and in the meantime, “the families could agree that they can start living together as husband and wife, even though the marriage is not yet completed.”

He said it is therefore different from the Western concept of co-habitation, which means moving in together because it’s less expensive or for some other reasons, but not necessarily with marriage as an end.

“It’s mentioned in the Synod document but I think it’s one of those things that a statement from the Synod cannot solve,” the cardinal said. “It’s really up to the African bishops to get together and work through and make sure that that particular custom does get incorporated into the Sacrament of matrimony.”

What Are the Expectations?

Cardinal Napier closed his presentation by saying “first and foremost” he felt the synod is “going to give a great impetus to the local Churches to embark on ensuring we have more and more really good marriages, through good marriage preparation, but also through good, clear teaching on what the Church expects of marriage and how the sacrament of marriage is celebrated.”

He also recalled the emphasis for reform in the Church at the last conclave, and said reform of the Church will help reform the family structure. “By making sure it is strong you will have a Church that is built on good foundations and therefore a Church that has a strong impact on society.”

He concluded by saying African people often called on their synod fathers to make sure they remained “faithful to the Church’s teaching” and to let Jesus’ Word and his teaching guide them through the synod.

“I believe to a great extent we have allowed ourselves to be led by that spirit and word,” he said.