Pope Francis on the Secrets of True Christian Humanism 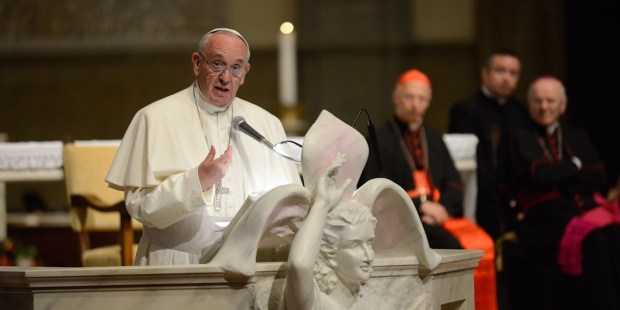 FLORENCE, Italy — On a one-day visit to the center of the Italian renaissance, Pope Francis said authentic Christian humanism flourishes in taking on the mind of Christ and gazing at his face.

Addressing participants in Italy’s Fifth National Ecclesial Convention on “The New Humanism in Jesus Christ” beneath the frescoed dome of the Florence Cathedral, Pope Francis said: “In the dome of this splendid cathedral the Last Judgment is represented. At the center is Jesus, our light. The inscription at the apex of the fresco reads ‘Ecce Homo.’

“Looking at this dome, we are drawn upward as we contemplate the transformation of Christ judged by Pilate into Christ ascended to the throne of judgment. An angel brings him a sword, but Jesus does not take up the symbols of judgment. In fact, he raises his right hand, showing the signs of his Passion, for it is he ‘who gave himself as a ransom for all’ (1 Tim 2:6).”

Pope Francis continued: “In light of this Judge of mercy, our knees bend in adoration, and our hands and feet are reinvigorated. We can only speak of humanism by beginning with the centrality of Jesus, by finding in him the traits of the true face of man.

“It is the contemplation of the face of Jesus crucified and risen that pieces together our humanity, even that fragmented by the hardships of life or marked by sin. We must not tame the power of Jesus’ face,” he said. “The face is the image of his transcendence. It is the misericordiae vultus. Let us allow ourselves to be gazed on by him. Jesus is our humanism.”

In his address at the Florence Cathedral, Pope Francis outlined three traits of authentic Christian humanism which we find in a preeminent way in the mind of Christ: humility, disinterestedness and the blessedness that comes from joy in the Gospel.

The first sentiment is humility. “The obsession with upholding one’s own glory and ‘dignity,’ one’s own influence, must not form part of our sentiments,” Pope Francis said. “We must seek the glory of God … the glory that shines in the humility of the stable in Bethlehem or in the dishonor of Christ’s cross.”

“Another sentiment of Jesus that shapes Christian humanism is disinterestedness,” the pope continued. “‘Let each of you look not only to his own interests, but also to the interests of others’ (Phil 2:4), St Paul goes on to say. … We must seek the happiness of those around us. The humanity of the Christian is always going out. It is not narcissistic and self-centered. When our heart is full of itself and self-satisfied, there’s no place in it for God.”

“One last sentiment of Christ Jesus is blessedness,” Pope Francis said. “The Christian is blessed; he holds the joy of the Gospel within.” The pope extolled the Beatitudes, which “help us to live the Christian life in terms of holiness. They are short and simple, but practical. May the Lord give us the grace to understand that.”

“A Church that presents these three traits—humility, disinterestedness, blessedness,” he said, “is a Church that is able to recognize the Lord’s action in the world, in culture and in the everyday life of the people.

“I have said it repeatedly and today I repeat it again to you: ‘I prefer a Church which is bruised, hurting and dirty because it has been out on the streets, rather than a Church which is unhealthy from being confined and from clinging to its own security. I do not want a Church concerned with being at the center and which then ends by being caught up in a web of obsessions and procedures’ (Evangelii Gaudium 49).”

Pelagianism, the Pope said, “prompts the Church not to be humble, selfless and blessed. And it does so through the appearance of a good. Pelagianism leads us to trust in structures, in organizations, in planning that is perfect because it is abstract.”

“Often it leads us also to take a controlling, hard, and regulatory style,” he added. “The rule gives the Pelagian the security of feeling superior, of having a precise guideline. In this he finds his strength, not in the lightness of the breath of the Spirit.

“In facing the evils or problems of the Church,” he went on, “it is useless to look for solutions in conservatism and fundamentalism, in the restoration of practices and outdated forms that even culturally aren’t able to be meaningful.”

Christian doctrine, he said, “is not a closed system incapable of generating questions, doubts, question marks, but it is alive, it is able to upset and to enliven. It has a face that is not rigid; it has a body that moves and develops; it has a soft flesh: it is called Jesus Christ.”

Therefore, the pope continued, “the reform of the Church—and the Church is semper reformanda—is alien to Pelagianism. It does not lie ultimately in the umpteenth plan to change structures. Instead, it means being grafted and rooted in Christ and letting oneself be led by the Spirit. Then anything is possible with ingenuity and creativity.”

Pope Francis encouraged the Italian Church to “allow herself to be led by his powerful and therefore sometimes disquieting breath.”

“May she always adopt the spirit of her great explorers, who were sailing enthusiasts of the open sea and not frightened by frontiers and storms,” he said.

“May she be a Church that is free and open to the challenges of the present, never on the defensive for fear of losing something. And, as she meets people along the streets, may she take on the purpose and aim of St. Paul: ‘To the weak I became weak, that I might win the weak; I have become all things to all men, that I might by all means save some’ (1 Cor. 9:22).”

A second temptation the pope said the Church must overcome is Gnosticism.

Gnosticism, he said, “leads to trust in clear and logical reasoning, which nonetheless loses sight of the tenderness of the flesh of one’s brother.”

“The charm of Gnosticism is that of ‘a purely subjective faith whose only interest is a certain experience or a set of ideas and bits of information which are meant to console and enlighten, but which ultimately keep one imprisoned in his or her own thoughts and feelings’ (Evangelii Gaudium 94).”

“The difference between Christian transcendence and any form of Gnostic spiritualism resides in the mystery of the Incarnation,” he added.

“Not putting things into practice, not leading the Word to reality, means building on sand, remaining in the realm of pure idea and degenerating into intimacies that bear no fruit, that make its dynamism sterile.”

Pope Francis extolled the great Italian saints—“from Francis of Assisi to Phillip Neri”—as examples that can help Christians live the faith with humility, disinterestness and joy.

“But we also think of the simplicity of fictional characters like Don Camillo, who teams up with Peppone,” he said.

“It strikes me how, in the stories of Guareschi, the prayer of a good pastor is joined to an obvious closeness with people. Don Camillo said of himself: ‘I am a poor country priest who knows his parishioners one by one, he loves them, who knows pains and joys and suffering, and knows how to laugh with them.’ Closeness to the people and prayer are the key to living a Christian humanism of the people that is humble, generous and joyful. If we lose this contact with the faithful people of God, we lose our humanity, and we don’t go anywhere.”