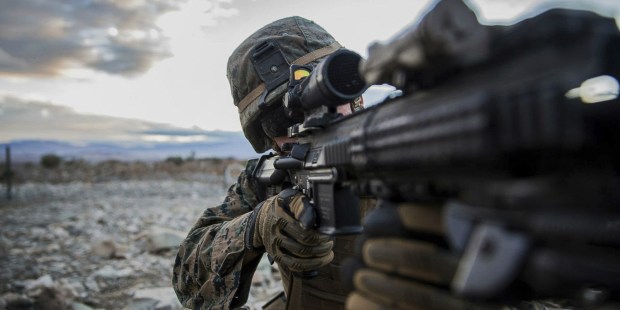 Four days after the Paris terrorist attacks, Secretary of State John Kerry visited the French capital and said the US and its allies must intensify their offensive against the Islamic State group. Kerry promised that ISIS “will feel greater pressure” in the coming weeks.

ISIS is believed to be behind the Nov. 13 attacks that took the lives of 129 people in Paris.

Now that there has been a spectacular attack on a Western target, is the US and the West finally getting serious about fighting the Islamist militant organization, which has persecuted Christians in Iraq and Syria for almost two years and wreaked havoc across the Middle East and Africa?

It has long been anticipated that ISIS would strike in the West, but aside from “lone wolf” attacks apparently inspired  by the Islamic State, its activities have largely been restricted to Syria and Iraq. Recent attacks in Ankara, Beirut and Paris, as well as the downing of a Russian passenger jet over Egypt, suggest a new playbook for the jihadists.

The United States has appeared to be offering a  weaker response to the threat, while Russia has forged ahead with military action to help Syrian President Bashar al-Assad, and now France apparently is striking back hard.

President Obama continues to insist that his response to ISIS, which has ruled out ground troops in Syria and Iraq, is working, though it will take time. Kerry, visiting Paris to show American solidarity with the French, said the US-led coalition had gained territory against the group and killed important leaders.

“There is a clear strategy in place, and step by step, I’m confident the momentum will pick up,” Kerry said.

Part of the solution, many observers agree, involves a settlement of the Syrian conflict. A US State Department official familiar with the Middle East said in an interview that the Paris attacks will lead to a push for “some kind of accommodation” in the civil war that is now in its fifth year.

“Some kind of compromise will have to be reached so that all the resources can be directed against ISIS, rather than having some resources going to the opponents of Assad,” said the official, who spoke on condition of anonymity because he is not authorized to discuss the issue. “There’s going to be increased pressure for the US, Russia and other stakeholders to get the whole Assad regime changed and civil war issues settled so we can focus on ISIS.”

He predicted that Kerry, along with Russian Foreign Minister Sergey V. Lavrov and UN Special Envoy Steffan de Mistura will strongly urge Assad to accept a deal in which he will be eased out of power.

“I don’t think they’re actually going to consult with Assad. It will be more like ‘This is what you’re going to do, Bashar,’” he said. “He’s no longer in a situation of autonomy. He is so dependent on the Iranians and the Russians. So…there will be a ceasefire, followed by a period of transition in which a new constitution is crafted with many stakeholders. There will be free and fair elections. And at some point during that time it will be announced that Assad has decided not to stand in the elections…. I can see that in 18 months, which is far too long, Assad goes off to some nice guest house on the banks of the Caspian Sea.”

In an interview with the French weekly Valeurs Actuelles,. Assad insisted he will leave power only if the people and the Syrian parliament ask him, adding that the question of his possible withdrawal is not subject to negotiation at an international level.

House Speaker Paul Ryan on Tuesday said the Paris attacks constituted an “act of war and that the world needs American leadership.” The House passed a National Defense Bill that Ryan said “requires the President to come up with a plan for defeating ISIS, not just containing, but defeating ISIS.”

Ryan also called for a pause in Obama’s Syrian refugee resettlement plan “in order to verify terrorists are not trying to infiltrate the refugee population.”

Concern has grown about potential terrorist attacks in the United States similar to that in Paris, particularly since one of the Paris attackers was thought to have entered Europe along with the massive wave of refugees from the Middle East.

Michael Morell, former acting director and deputy director of the CIA, said in a Time magazine op-ed Monday that Obama’s ISIS strategy is not working and that the US can expect to see the group carry out attacks on US soil.

“Over time, if not significantly degraded, the ISIS threat to the Homeland will become a direct one—that is, an ISIS ability to plan and direct attacks on the Homeland from the group’s safe haven in Iraq and Syria— just like the group did in Paris last week,” Morell wrote.

Not only are there “thousands” of ISIS followers in the US, the Islamic State has quickly gained affiliates around the globe, he said. “From nothing a year ago, there are now militant groups in nearly 20 countries that have sworn allegiance to ISIS,” Morell wrote. “They have conducted attacks that have already killed Americans, and they carry the potential to themselves grab large amounts of territory. Libya is a place that this could happen in the near term.”

Deputy National Security Adviser Ben Rhodes, however, said that while “thousands” of fighters have traveled to Syria and then returned to Europe, the number being tracked in the US is far smaller—around 40, according to CNN.

In an interview with the French Catholic newspaper La Croix on Sunday, the Italian cardinal spoke of disarming “an unjust aggressor” as justification for using force.

He also acknowledged that the Vatican itself could be a target “because of its religious significance.”

Cardinal Parolin said Church teaching recognizes the right of a state “to protect its citizens and repel terrorists,” but said it’s important that any such military action enjoy international support.

He said the Vatican would not back any specific plan for action against ISIS but spoke of the need for a broad global mobilization in the fight against terrorist violence. Such a coalition should include religious leaders, he said.

The cardinal said a global response should involve spiritual resources, one “that passes through education to the refutation of hatred, giving responses to young people who leave for jihad.”

Without a political and religious alliance at an international level, he said, “this difficult battle won’t be won.”

The effort must involve the Muslim community,” he added.