6 Questions (and Answers) on the “Internal Forum Solution” 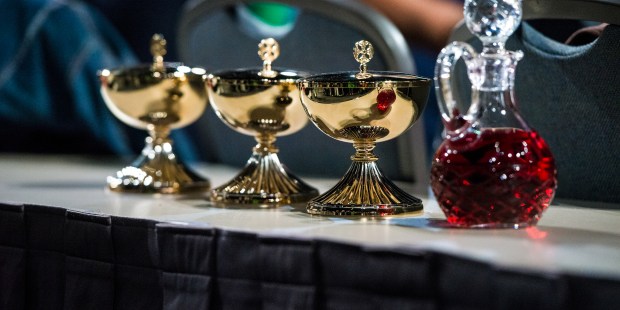 Is it possible to be pastoral without the internal forum solution?

[The issue of the “Internal Forum Solution” was raised during the recently concluded Bishop’s Synod for the Family, and it is likely to be discussed throughout the upcoming Year of Mercy. We present this Q&A in hopes of facilitating an understanding of the Church’s teaching. – Editor]

1. What does the term “internal forum” mean?

The “internal forum” is an expression used by the Church to describe the private sphere of a person’s interior life. It is often contrasted with the “external forum,” which consists of an individual’s outward, observable actions and behaviors. The internal forum includes areas such as an individual’s conscience and his or her personal relationship with God. The sins and struggles a person discloses in confession, as well as the details of one’s personal spiritual life, are considered matters of the internal forum.

2. What are the Church’s laws on divorce, remarriage and communion?

In our current Code of Canon Law, we have two canons on the lawful reception of Holy Communion. Canon 916 advises individual Catholics who are conscious of unconfessed grave sin to abstain from the Eucharist, and canon 915 requires Church authorities to refrain from admitting to communion those who are continually living in a sinful situation which is outwardly observable. Catholics in irregular marriages—that is, marriages which are not regarded by the Church as lawful or valid—are ineligible to receive Holy Communion under both of these canons.

While it might seem harsh to apply canon 915’s verbatim description of “obstinately persevering in manifest grave sin” to otherwise faithful Catholics in irregular marital situations, a basic tenet of Catholic morality is that sexual intimacy is only moral within the context of a valid marriage. Those who live in society as husband and wife are generally presumed to be having marital relations, but Catholics in irregular marriages are either not truly married (as is the case when a Catholic marries outside the Church without the required permission); or are living in what is technically an adulterous relationship (i.e., where at least one of the spouses was previously married without having received a declaration of nullity, and is therefore considered still married to the former spouse).

3. What is the “internal forum solution”?

The “internal forum solution” is not an actual canonical term, so it has no official definition. On a more popular level it is usually taken to indicate an arrangement where a Catholic in an irregular marriage is allowed to receive communion before or instead of having their situation formally resolved in accord with the Church’s laws.

For example it has been proposed that a divorced and remarried Catholic might consult with his parish priest during confession—that is, within the “internal forum”—and come to his own decision in conscience about whether his first marriage was invalid. Similarly, it has likewise been suggested that a couple in an irregular marriage could potentially discern in the internal forum that, despite their objectively illicit circumstances, they are nevertheless still personally disposed to receive Holy Communion.

4. Why is the internal forum solution problematic?

First of all the internal forum solution is problematic because no one is truly capable of judging their own situation in a fully unbiased way. The reason we have marriage tribunals in the first place is so Catholics may have an objective means through which they can come to know the truth of their situation.

Even if a couple were to consult a trusted pastor or confessor, that individual priest would not necessarily be capable of assessing the situation objectively, either. For one thing, the priest may be understandably biased towards the party with whom he has been working, and his unlikely to have a clear picture of the entire situation. A parish priest also may not have the specialized training necessary to come to an accurate judgment on the validity of a marriage.

More importantly, however, would be the fact that allowing an “internal forum solution” would undermine the Church’s entire legal system. This in turn would severely weaken the Church’s ability to promote justice and protect the rights of the faithful.

While it may seem merciful to suggest that parts of canon law might be disregarded in certain difficult cases, we need to keep in mind that Church’s universal laws were very carefully designed to apply to everyone equally all over the world. Although there is a popular conception of canon law an insensitive, unyielding set of rules, in reality the Code already has a number of built-in areas for pastoral discretion, allowances for local circumstances, or procedures for requesting privileges or dispensations. Because of this, allowing even well-intentioned members of the faithful to dispense themselves from certain requirements would prevent the Church’s law was fulfilling in its most essential functions.

5. Is it possible to be pastoral without the internal forum solution?

Yes, of course it is. The most truly pastoral thing of all is to lead the faithful closer to God by “speaking the truth in love” (cf. Ephesians 4:15). Even very challenging truths can be conveyed in a compassionate way.

On a practical level, pastors can help the faithful in irregular marriages to rectify their situation through the established lawful means. In situations where there might not be possible, such as a case where a declaration of nullity cannot be granted, pastors can still provide sensitive encouragement and moral support to a couple as they make whatever painful sacrifices are necessary in order to turn away from sin and grow in holiness.

6. Could a solution ever include the reception of Holy Communion?

It is possible that a couple in an irregular marriage could still be permitted to receive Holy Communion if they are sincerely resolved to abstain from marital intimacy by “living as brother and sister.” Even if the couple were to fail occasionally due to human weakness, as long as they had the intention to remain chaste, they would only need to receive the sacrament of penance before they could partake of the Eucharist once more.

Though this might at times be awkward for the couple, an attentive pastor could still help them be confident in their efforts to live a fully Christian life despite whatever judgmental attitudes they might encounter.

In fact, we might consider a firm interior commitment to chastity to be the true “internal forum solution.”

Jenna M. Cooper is a consecrated virgin of the Archdiocese of New York. She completed a licentiate in canon law at the Pontifical University of the Holy Cross in 2014.