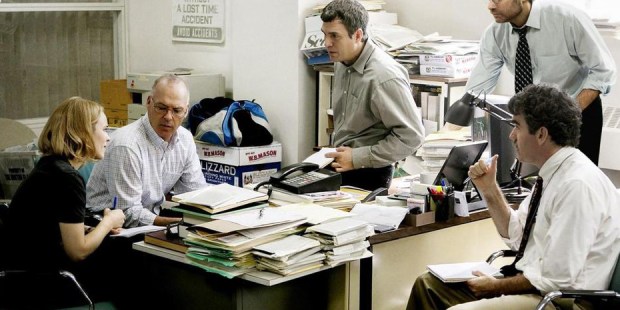 Integrity is a hard-scraped virtue today. It is the fruit of day after day after day of living in hope, trying to be the kind of person you would admire, “even when no one is watching,” in the words of C.S. Lewis. Yet in this digital age, such fruit can be quickly dashed to the ground when a thoughtless, mean act of character assassination is perceived to be the truth.

This brief article hopes to stay that result, visited upon someone who appears as a character in the film Spotlight, about the sexual abuse crisis in the Catholic Church, and how it was uncovered by staffers at the Boston Globe.

Jack Dunn is the head of the public relations office at Boston College, a colleague and a friend. He is also a long-time member of the board at Boston College High School, in which capacity he was contacted in 2002 by Walter Robinson (another BC High alum) of the Globe’s spotlight team. Robinson wanted a meeting with Dunn and the BC High president regarding allegations of abuse by priests at the school.

In real life, Dunn drew up for the school’s board of trustees a four-point plan to address the allegations with transparency and compassion. But in the movie, the character “Jack Dunn” is portrayed as callous and indifferent. A recent Globe story by Kevin Cullen, “When the truth ends up on a cutting room floor” gets it right:

But real life usually isn’t dramatic enough for the silver screen. Artistic license means screenwriters and filmmakers can take a scene from real life and make it a composite that serves what they consider a larger truth. In other words, they make stuff up.

The scene in question involves four characters, including one who does not exist in real life. There are any number of ways that the story could have been told—not the least of which is the true story—but instead director Tom McCarthy chose to risk the reputation of a good man by assigning to him dialogue that dismisses the severity of the abuse. Kevin Cullen of the Globe writes of Dunn’s reaction:

When I talked to him last week at his office in Chestnut Hill, it was obvious that Dunn was emotionally and physically wrecked by the way he’s portrayed in the film. At one point, he cried, describing how his son, a senior at BC High, felt compelled to stand up and defend him in front of his classmates before they went, as a class, to see the film.

Make no mistake: the film tells a wrenching story of violence against young people, covered up by men who should have stopped that violence. Dunn himself calls the film a “powerful movie that does a great service to showcase what investigative journalism can do in uncovering the truth.” But it did not need to malign the character of a good man in order to tell that story. Boston College High School supports him and the role he took in making that institution a model for others to follow in responding to sexual abuse.

The filmmakers should remove the scene from the film. Ironically, according to Dunn, an earlier version of the screenplay had the offending lines spoken by the fictional character; they need not have been placed in the mouth of a character whose real-life counterpart would suffer as a result of the film’s portrayal of him.

Dunn, to his great credit, expresses reluctance at having to bring forward his story, recognizing that ultimately the focus ought to be on the victims of abuse. That sentiment might ring hollow to some who do not know Dunn: a man of great integrity who sought to do the right thing in the face of violence visited on classmates and friends.

For a better understanding of Dunn, read this moving story he recently published about a dying friend’s wish.

Tim Muldoon was the inaugural director of The Church in the 21st Century Center at Boston College, originally conceived to explore the problematic issues highlighted by the sexual abuse scandal in the Catholic Church. In that capacity, he worked with Jack Dunn extensively. He currently serves in BC’s Division of University Mission and Ministry.