The Christmas Truce of 1914 Comes to Broadway 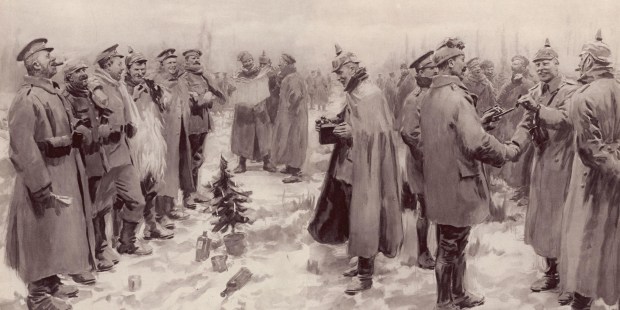 “Our Friends the Enemy” hopes to rekindle a moment of faithful peace, in a world at war

Pope Francis opened the Holy Door at St. Peter’s Basilica in Rome on Tuesday, initiating the Jubilee Year of Mercy. And on Wednesday, in New York, the curtains will rise on an off-Broadway play in New York City telling a tale of a fleeting moment of mercy in the midst of horror.

Our Friends the Enemy, a British play that commemorates the First World War’s “Christmas Truce of 1914” makes its American debut at New York City’s The Lion Theater on Dec. 9.

The Christmas Truce was a moment of shared humanity across enemy lines in the European conflict of 100 years ago, but the spirit of feast was quickly set aside and the mutual killing intensified until an armistice was called five years later.

In this off-Broadway retelling, the audience is brought as close to the fighting as the men of war were to one another. In one scene, the main character, Private James Boyce, describes how the opposing trenches are separated by a narrow strip of wasteland known as No-Man’s Land, snarled with barbed wire and corpses. Boyce knows he is a grenade’s throw away from the German troops fighting the British and their French allies.

Firsthand accounts of the soldiers gleaned from letters home to their loved ones vary as to when the unofficial truce started. On one section of the Western Front, British soldiers said they heard the Germans begin to sing “Stille Nacht.” The British were familiar with the melody, but initially, they did not understand the words. Soon, the British realized that it was “Silent Night,” and all of their voices became one choral exchange, singing hymns that celebrated the birth of Jesus.

Two of the producers of the play, Robert Carreon and David Adkin, said the truce is what Christmas is all about.

“It’s not like they were singing ‘Jingle Bells,’” Carreon said. “If you look at the lyrics in ‘Silent Night,’ they say everything about what the Christmas spirit is.”

By some historians’ estimates, 100,000 troops, who were bent on killing each other, put aside their weapons for a spontaneous Christmas truce.

“In the bleakest of times, in the midst of a world war, a reverence for the human person shines through and is stronger than anything,” Adkin said.

The peace, however, did not last. Pope Benedict XV called for a universal cessation of hostilities, but it went unheeded by the power brokers. The leadership on both sides were concerned that fraternization on this scale was a dangerous threat to the war effort. Soon after Christmas, the combatants used chemical weapons. The result was higher casualties and further dehumanization of the enemy. By war’s end, 17 million soldiers and civilians were dead.

If the soldiers involved in the truce had any say, they may have all gone home.

“And I thought, well, this is really a most extraordinary thing — two nations both singing the same carol in the middle of a war,” said Williams.

Adkin hopes the one-man play is as well-received in the United States as it was in Britain.

“The play opened at the 2013 Edinburgh Fringe Festival and in 2014 toured up and down the U.K. to great success,” Adkin said. “And now we’re here in New York City.”

The playwright, Alex Gwyther, 28, is also the man in the trenches — literally. He is the only actor on stage and plays Boyce.

While the truce was over 100 years ago, Gwyther said some audience members still have a first-person connection to the Great War.

After one performance, Gwyther said a very elderly woman grasped his hand and kissed his cheek. She recalled a family member who fought in the war and said the play brought it all back for her.

“Many people talk to me about their relatives who fought in the war, and some even took part in the truce,” Gwyther said.

In the present day, Pope Francis said that peace is also illusory. In the aftermath of the terrorist attacks in Paris and Beirut, Francis echoed the statement of Benedict XV: “Everywhere there is war today, there is hatred.”

“We are close to Christmas. There will be lights, there will be parties, bright trees, even Nativity scenes — all decked out — while the world continues to wage war,” Francis said. “The world has not understood the way of peace.”

After Carreon thought about all the work involved in bringing the play to the Theater District, he said he was grateful for its message. “I didn’t think I needed this play,” Carreon said. “But what I did need was a reminder of how powerful God’s presence is, especially during Christmas.”