Our Father, in a Galaxy Far, Far Away 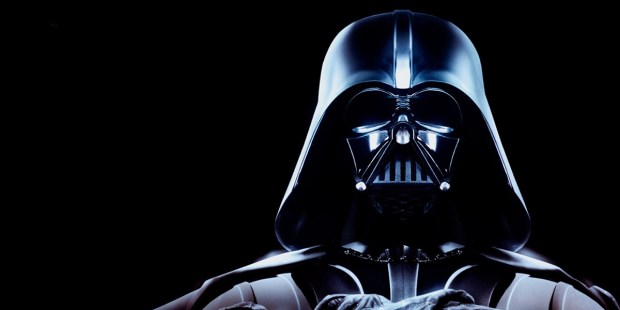 Between Star Wars and Charlie Hebdo, no wonder society understands neither fathers nor God-as-Father

For the first anniversary of the terrorist attacks on their offices, the editors of the French satirical magazine, Charlie Hebdo, portrayed God as a terrorist on their cover. The Vatican has strongly criticized the image, which depicts an elderly bearded figure with bloody hands, a gun strapped to his back, and a traditional, triangle-shaped nimbus (indicative, in Christian art, of God the Father) around the head of the figure.

There is nothing fatherly about this image.

Even if you were unaware of this development, however, an unrelated event — the reemergence of Star Wars as a pop culture force (ahem) to be reckoned with — cannot have escaped your notice. (Here is where I must place the usual “SPOILER ALERT.” Star Wars: The Force Awakens has been out for a few weeks now, but if you have not seen the movie yet, you may want to stop reading at this point. Otherwise, let us consider how fatherhood is portrayed in these hugely popular films.)

For a saga that depends so heavily on the external repercussions of an internal family drama, we hardly know anything about the parentage or childhood of almost any of the characters. One takeaway from the Star Wars universe is that being a parent is a bad gig, being a foster parent is apparently even worse and fathers are fairly useless. Is Star Wars anti-fatherhood, or does the absence of a benevolent father figure in the movies speak to the absence of the ultimate benevolent Father in our society?

We know Anakin Skywalker/Darth Vader had a mysterious conception with no father at all; the murder of Anakin’s mother leads him into committing his first mass atrocity. When his wife, Padme Amidala, dies in childbirth, in part due to his own act of violence against her, his children, Luke and Leia, are hidden from him and given to foster parents to raise. In fact, he is so unaware of his own daughter’s existence that his realization of Leia’s true origins proves a major turning point in the story.

An even stranger father-child relationship is touched upon in the back story of the fan-favorite bounty hunter, Boba Fett, the ultimate designer baby. He is a clone, created at the request of his father-twin, Jango Fett, in what is surely the ultimate act of narcissism.

Foster parents do not have things any easier here, for both Luke and Leia’s adoptive parents are murdered by the Empire. Uncle Owen and Aunt Beru are killed by storm troopers, and their burnt bodies are discovered by Luke, in a scene that haunted me and no doubt many other children for years. Senator Bail and Queen Breha Organa — and indeed their entire planet — are blown up by the first Death Star while Princess Leia is forced to look on by her biological father, who has spent off-screen time torturing his daughter for information.

In The Force Awakens, we learn that Kylo Ren — a.k.a. Ben Solo — is the son of Leia and Han Solo, but that he has cut off his relationship with his parents. The seeming finality with which he does so is one of the most shocking moments in the new film. We also learn that the ex-storm trooper Finn was abducted from his family at birth; he does not know who he is or where he came from, even though, in a brief scene, the observant eye can spot that computer records have been kept of his origins, including a baby picture. As for Rey, the heroine of the new trilogy, no one quite knows what her story is, other than that she was abandoned as a child on a desolate planet. Incidentally, if you want to spend hours debating the minutiae of plot in the new Star Wars film, get into an argument online about who Rey’s parents are (my vote is for Han and Leia, theories about Luke or Ben Kenobi notwithstanding.)

It seems that all the parental relationships in the Star Wars films are tortured in some way, but particularly when it comes to fathers. Fathers are conspicuously absent or incapable of playing a fatherly role in these films. One could also argue that, in creating a tortured father image of their own, the editors of Charlie Hebdo are similarly operating under the assumption that God himself is absent, or possibly malevolent in his intent.

However, if one looks carefully, both significant absent-father characters in the Star Wars universe are given a chance to redeem themselves and behave like fathers should, and both take their opportunity to do so. Earlier in the series, as Luke suffers from the searing pain inflicted upon him by the Emperor Palpatine at the climax of Return of the Jedi, the pleas of his son finally rouse Darth Vader into behaving like the father he should have been all along.

In a poignant moment in The Force Awakens, Han Solo complains that he is no Jedi and questions the efficacy of his trying to do anything to bring his son back from the Dark Side. Leia points out that he is something more important than a Jedi; he is the boy’s father. That is both a power and indeed a responsibility, which Han belatedly recognizes and acts upon.

Once they step up and behave as fathers should for their children, Vader and Solo each lose their lives for the sake of their sons. (If the reader will forgive my juxtaposition from fantasy to the Gospel of Matthew, how much more, then, will our Father in heaven do for us in real life?)

Iconography aside, this is where Charlie Hebdo gets the image of God the Father seriously wrong.

When the disciples asked Christ to teach them how to pray as he did, he taught them the prayer that we call the “Our Father.” In its simple, direct language lies the clear recognition that we have a loving relationship with God the Father who created us, not one based on fear. We plead with him to save us from ourselves and our own fallen natures. To us he is not, as for the pagans, a malevolent, capricious entity, interested only in pleasure and inflicting pain for perceived slights.

The Our Father is a revelation of just how much we are loved by the Father in heaven. It is not a plea for wealth, nor for the destruction of our enemies, nor the nonsensical wishes of ignorant terrorists, nor an expression of the corrupting desire for power over others. Instead, it is a plea made out of trust, that as our Father, he will give us what we need, materially and spiritually, for each day. We ask for these things not as a small child does, in order to indulge in its own fancies, but rather as an adult child does, in order to be able to carry out the Father’s will, doing whatever he believes, in his mercy, is best for us.

We can make this prayer because we know that the pleas made to a fundamentally good father on behalf of his children do not go unanswered. Nor do the pleas that we make to the Father above fall on deaf ears — the real God the Father, not a satirist’s malicious cartoon. And despite all the estrangement, violence and death surrounding the role of fatherhood in the Star Wars universe, if we know where to look for it, we can see that the same loving relationship is there too. So perhaps there is still hope left, at least in some corners of popular culture, for fatherhood after all.

William Newton is a graduate of the Georgetown University School of Foreign Service, the University of Notre Dame Law School and Sotheby’s Institute of Art in London. Learn more at wbdnewton.com and follow him on Twitter at wbdnewton. He blogs at Blog of the Courtier.