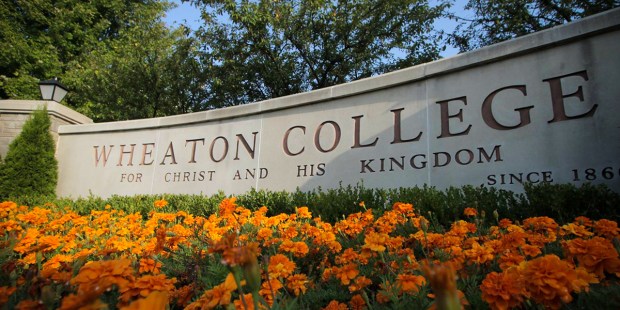 It’s the “Evangelical Harvard,” and it’s made the national news for trying to fire a politics professor who said that Christians and Muslims worship the same God. An outsider can’t judge what’s actually happening between Wheaton College and Larcyia Hawkins, but one can say the internal controversy over what the school believes shows Evangelicals turning into Catholics, or at least finding that to live in the world requires operating as the Catholic Church operates.

The college accused Hawkins of violating its “theological positions.” Fair enough, you might say. A college can decide what beliefs it holds as a body and require its faculty in which to agree. Would that more Catholic colleges were so careful with their faculty’s religious commitments. If a professor changes his mind, as people do, the college can ask him to move on and force him to if he doesn’t on his own.

But the college is charging Hawkins with holding a view that is not part of the “Statement of Faith” the faculty must sign every year. It is not an obvious implication of that Statement, a very detailed one that incorporates the Nicene Creed with Evangelical distinctives. One of the country’s leading Evangelical theologians, writing in Evangelicalism’s main magazine, Christianity Today, wrote 13 years ago, “Is the Father of Jesus the God of Muhammad? The answer is surely yes and no.” Hawkins seems to have said more or less the same thing.

Evangelicalism has insisted on a faith based on what the Bible clearly says, which everyone can see for himself if he looks and which settles all important questions. It’s a charming ideal. It just doesn’t work in practice. The Church insists on an elaborate structure of doctrines and a living voice to interpret them. She’s also happy to leave many questions open — not saying they can’t be answered but that the Church doesn’t yet have an answer. The exact status of Islam, beyond Lumen Gentium’s “together with us they adore the one, merciful God, mankind’s judge on the last day,” seems to be one of these.

This is the way things work, something God presumably understood when he created his Church. He created her to live in history. Questions come up that the existing statements don’t answer, and someone with authority has to answer them, at which point the Church adds the answers to the existing statements, or else the authority decides they’re not yet answerable and the discussion continues. We have the Scriptures, of course, like our friends the Evangelicals, but also a 2865-point Catechism and a living Magisterial voice to examine all the many questions the Christians living in the world have to answer.

I saw the same thing as is happening at Wheaton years ago at the annual meeting of the Evangelical Theological Society, which I attended a few months after my family had entered the Church. The leadership was arguing that several members had violated the group’s very minimal statement of faith. Having heard two of the men being essentially charged with heresy, I thought they clearly proved themselves in conformity with the statement as written.

To argue that they were not in conformity, the leadership had to insist on beliefs the statement of faith didn’t cover (a Catechism of the Evangelical Church, in effect) and on the authority of certain senior members to say what the ETS actually believed (a living Magisterium, in effect). It was the only way they could make their case, and their case may well have been true to what Evangelicals as a whole held. But to make it they had to leave the oft-trumpeted simplicity of Evangelicalism for something like Catholicism.

Chesterton got at this in Orthodoxy. He was speaking of people who talk dreamily about the spirit of Christianity but dislike the practice of Christianity — the people who love Jesus and despise St. Paul, for example — but it applies to our friends who believe Christianity a simple operation. “This is why the faith has that elaboration of doctrines and details which so much distresses those who admire Christianity without believing in it,” he wrote.

When once one believes in a creed, one is proud of its complexity, as scientists are proud of the complexity of science. It shows how rich it is in discoveries. If it is right at all, it is a compliment to say that it’s elaborately right. A stick might fit a hole or a stone a hollow by accident. But a key and a lock are both complex. And if a key fits a lock, you know it is the right key.

I have seen the look on friends’ faces when they’ve asked what the Church believes, and I showed them the Catechism. It’s a very fat book. They were hoping for something shorter. You can imagine their faces if I also showed them the documents of the Second Vatican Council, another fat book, and the documents of preceding councils, an even fatter book, and collections of papal encyclicals, a whole set of fat books, and all the lesser but still significant homilies and statements.

Intimidating, yes, but an argument for the Church as the living voice of God through history. The Church deals with problems as they come up and answers them with authority (or leaves them open with authority). It’s the only way a religious body can remain faithful to its founding and maintain its identity. As one of the bouncy modern hymns might put it, though I’ve never heard one do this, our God is a practical God. Hence that elaboration of doctrines and details.