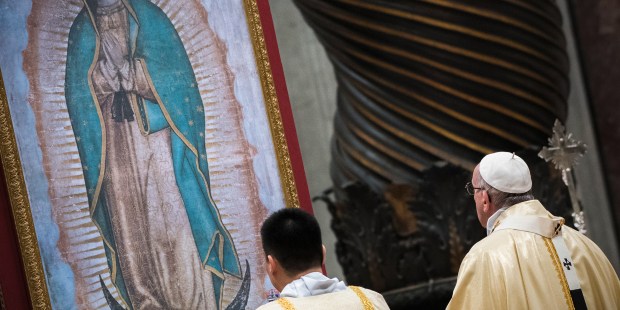 On a busy trip, in a crowded city, Francis looks forward to special encounter on third visit

Mexico City is one of the most densely populated cities in the world. And when Pope Francis visits Mexico next week, his schedule will be packed with masses, meetings with government officials and visits to various groups.

But there’s one little bit of time he is requesting for himself: a few minutes alone with the miraculous image of Our Lady of Guadalupe in Mexico City.

“Sometimes I am afraid of certain problems, or something unpleasant happens and I do not know how to react, and I pray to her,” he said in a videotaped interview with Mexican news agency Notimex this week. “I like to repeat to myself, ‘Do not be afraid; am I not here, your Mother?’ They are her words: ‘Do not be afraid.'”

Francis will begin his apostolic trip Feb. 12. In addition to the capital, he will visit Ecatepec, Tuxtla Gutierrez, San Cristobal de Las Casas, Morelia and Ciudad Juarez, returning to Rome on Feb. 17.

It will be Francis’ third trip to Mexico but his first as pope. He explained in the interview that he was in the country in 1970 for a meeting with his religious order, the Society of Jesus, and in 1999, when Pope John Paul II signed the post-synodal exhortation “The Church in America.” Both times, he visited the image of Our Lady of Guadalupe, which appeared miraculously on the tilma, or cloak, of the indigenous man Juan Diego in December 1531, as a sign to convince the local bishop that the Blessed Virgin Mary had asked for a church to be built there in her honor.

The tilma, made of natural fibers, should have crumbled in a few years, but it has survived for almost 500. Microscopic studies of the eyes of the image of the Blessed Mother are said to show the reflection of the astounded bishop and other persons in the room at the moment that she appeared on Juan Diego’s cloak.

Pope John Paul II canonized Juan Diego, long regarded by Mexicans as a saint, in 2002. The pope recognized Our Lady of Guadalupe as “Patroness of all America,” urging the term for North, Central and South America as a show of solidarity.

Pope Francis said in the interview that he was in the process of building a shrine to St. Juan Diego in Buenos Aires, Argentina, when he was elected Bishop of Rome in 2013.

“I feel … that she is our Mother, who cares, protects and leads a people, who leads a family, who gives the warmth of home, who caresses with tenderness and who banishes fear,” Francis said. “It is an eloquent image, that of a Mother like a blanket who covers and cares, in the midst of her people. … This is what I feel before her.

“What I would ask you, as a favor,” he concluded, “is that this time, the third time I will be on Mexican soil, that you will let me spend a moment before the image. That is the favor I ask of you.”