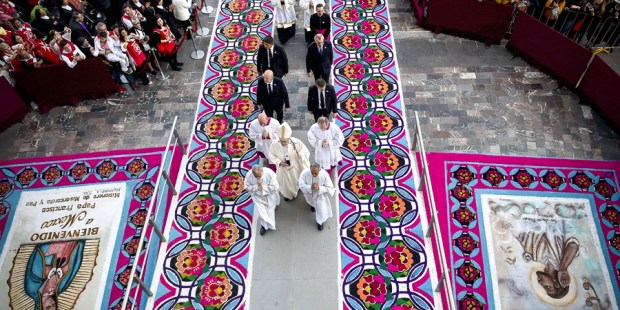 Exuberant strains of mariachi music, excited shouts of pilgrims and words of politicians, ecclesiastics and even Pope Francis himself all gave way to silence Saturday evening in Mexico City as the pope sat in the presence of the miraculous image of Our Lady of Guadalupe.

Francis had asked the Mexican people for this moment — and received it — a private retreat, he called it, in the presence of a seemingly indestructible piece of cloth that spurred a massive conversion to the Catholic faith in the 16th century.

Moments earlier, at the end of the Mass he celebrated in the modern Basilica of Our Lady of Guadalupe, the Holy Father presented and blessed a personal gift: a gold crown to adorn the image. Instead of exiting the basilica in a recessional, Francis was escorted up a staircase behind the main altar to the camarin, a small room that gives access to the framed icon. The image, hinged to the wall, was drawn back so that Francis could sit before it — and the congregation could view the pope contemplating Our Lady of Guadalupe. He presented the crown and, assisted by girls clad in white dresses, a bouquet of yellow roses.

Appearing for a moment to stumble backward, he was guided into his seat with the help of one of the girls and proceeded to silently contemplate the woman robed with the stars for at least a quarter of an hour, implicitly inviting the congregation, both inside the basilica and out on the large plaza, to join him in prayer.

The Mass itself was marked by moments of reverence of the image, which appeared miraculously on the tilma of St. Juan Diego in 1531 as a sign that the Blessed Mother was indeed appearing to the Maseual Indian, asking him to build her a shrine on Tepeyac Hill. The large image, framed in silver and gold and draped by a huge Mexican flag, towered above the main altar. As Pope Francis incensed the image, all the bishops who were seated on either side of the sanctuary turned and faced it as well.

After delivering a homily about the continuing call to build shrines by practicing the works of mercy, the pope sat in a chair in the center of the sanctuary and stared up at the image in childlike wonder and in prayer for almost five minutes. The congregation, inside and out, kept almost perfect silence.

Just as the Mother of God made herself present to Juan Diego, “so too she continues to reveal herself to all of us, especially to those who feel, like him, ‘worthless,'” the pope said in the homily, in which he quoted from the Nican Mopohua, the first written account of the events of 1531. Juan Diego “became ‘the ambassador, most worthy of trust.’

“On that morning in December 1531, the first miracle occurred, which would then be the living memory of all this shrine protects,” he continued. “On that morning God roused the hope of the little ones, of the suffering, of those displaced or rejected, of all who feel they have no worthy place in these lands. On that morning God came close and still comes close to the suffering but resilient hearts of so many mothers, fathers, grandparents who have seen their children leaving, becoming lost or even being taken by criminals.”

In this way, she managed to awaken something he did not know how to express, a veritable banner of love and justice: no one could be left out in the building of that other shrine, the shrine of life, the shrine of our communities, our societies and our cultures.  We are all necessary, especially those who normally do not count because they are not “up to the task” or “they do not have the necessary funds” to build all these things.  God’s shrine is the life of his children, of everyone in whatever condition, especially of young people without a future who are exposed to endless painful and risky situations, and the elderly who are unacknowledged, forgotten and out of sight.  The shrine of God is our families in need only of the essentials to develop and progress.

Because so many pilgrims come here with hopeless situations, “silence does us good as we pause to look upon her,” the pope suggested. “And in looking at her, we will hear anew what she says to us once more, ‘What, my most precious little one, saddens your heart? Yet am I not here with you, who has the honor of being your mother?'”

Our Lady of Guadalupe, the pope said, continues to ask the faithful to build shrines — not, perhaps, in the same sense as she asked Juan Diego but by “accompanying lives, wiping away many tears,” Francis suggested. “Simply be my ambassador by walking along the paths of your neighborhood, of your community, of your parish; we can build shrines by sharing the joy of knowing that we are not alone, that Mary accompanies us. ”

The pope summed up, in a reference to the Corporal and Spiritual Works of Mercy, during this Jubilee Year of Mercy, “Be my ambassador, she says to us, giving food to the hungry, drink to those who thirst, a refuge to those in need, clothe the naked and visit the sick.  Come to the aid of your neighbor, forgive whoever has offended you, console the grieving, be patient with others and above all, beseech and pray to God.”