“This Sinner, Antonin Scalia …” and Why We Are Here 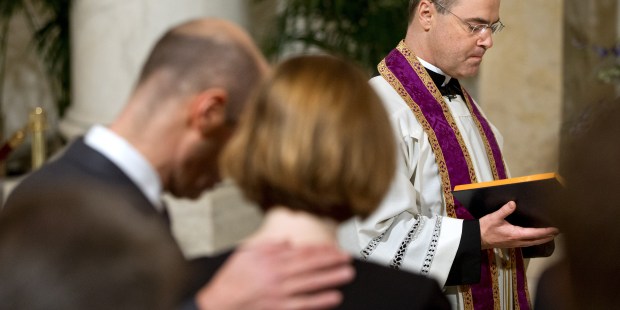 A deep appreciation of Fr. Paul Scalia’s remarkable homily at his father’s funeral

His voice was soft and soothing, composed without losing warmth. And his message was assured and steady. His eyes had that faraway look punctuated with flashes of pure presence, contentment. He was consoling the living while, into God’s hands, he was commending the dead. But for Fr. Paul Scalia, this Mass of Christian burial was different, bittersweet even. For underneath the cream-colored pall draped across the casket lay his father, Antonin.

“We are gathered here because of one man. A man known personally to many of us, known only by reputation to even more. A man loved by many, scorned by others. A man known for great controversy, and for great compassion. That man, of course, is Jesus of Nazareth.

“It is he whom we proclaim. Jesus Christ, son of the father, born of the Virgin Mary, crucified, buried, risen, seated at the right hand of the Father. It is because of him, because of his life, death and resurrection that we do not mourn as those who have no hope, but in confidence we commend Antonin Scalia to the mercy of God.”

In his dulcet tones, the obvious question “Why are we here?” was given the oft-forgotten answer: we are here not primarily for this life which has ended, but rather for the Life that never dies. The Life here presently and into eternity. Quite simply, we are here because of Christ.

Oh, don’t be mistaken. Antonin Scalia was celebrated by his son. His marriage of 55 years. His fatherhood of nine and grandfatherhood of 36. His childlike playfulness and razor-sharp wit. And his deep devotion to the law and his country. Even more, we were given a glimpse at his deep and abiding faith.

“God blessed Dad with a deep Catholic faith: the conviction that Christ’s presence and power continue in the world today through his body, the Church. He loved the clarity and coherence of the Church’s teachings. He treasured the Church’s ceremonies, especially the beauty of her ancient worship. He trusted the power of her sacraments as the means of salvation as Christ working within him for his salvation. … Dad understood that the deeper he went in his Catholic faith, the better a citizen and public servant he became. God blessed him with the desire to be the country’s good servant because he was God’s first.”

But perhaps most compelling, most humbling and most true was the emphasis Fr. Paul placed on his father being a sinner.

“We are here, then, as he would want, to pray for God’s inexplicable mercy to a sinner. To this sinner, Antonin Scalia. Let us not show him a false love and allow our admiration to deprive him of our prayers. We continue to show affection for him and do good for him by praying for him: That all stain of sin be washed away, that all wounds be healed, that he be purified of all that is not Christ. That he rest in peace.”

This was no shocking indictment, or sop to naysayers of the late Justice. Rather, it was a simple declaration of the condition we all share: We are fallible, sinful but redeemable. The popular postmortems (mine included) have spoken and will continue to speak to the legacy of Antonin Scalia. But this all fades into nothing as this child of God, “Nino,” grasps the hand of Christ and finds his way home. At last.

And so, in this final Mass for Antonin Scalia, we were embraced by the deep love and mercy of the unchanging Christ. And as the Eucharist was celebrated, the broken body of Christ once again assured and conveyed its Grace to Antonin, to his family, to you and to me. Consequently, we would be remiss if we failed to allow this Grace to transform us.

“So we cannot depart here unchanged. It makes no sense to celebrate God’s goodness and mercy to Dad if we are not attentive and responsive to those realities in our own lives. We must allow this encounter with eternity to change us, to turn us from sin and toward the Lord.”

“Jesus himself becomes present here today under the form of bread and wine so that we can unite all our prayers of thanksgiving, sorrow and petition with Christ himself as an offering to the Father. And all this with a view to eternity, stretching toward heaven, where we hope one day to enjoy that perfect union with God himself and to see Dad again and, with him, rejoice in the communion of saints.”

Go, Antonin Scalia, child of God. Be well and be still. Requiescat in pace.

Tod Worner is a husband, father, Catholic convert and practicing internal medicine physician. He blogs for Patheos as A Catholic Thinker. He is a founding member of the Antonin Scalia Society. Find us on Twitter and Instagram: @scalia_society.