St. Gregory of Narek: “Speaking With God from the Depths of the Heart” 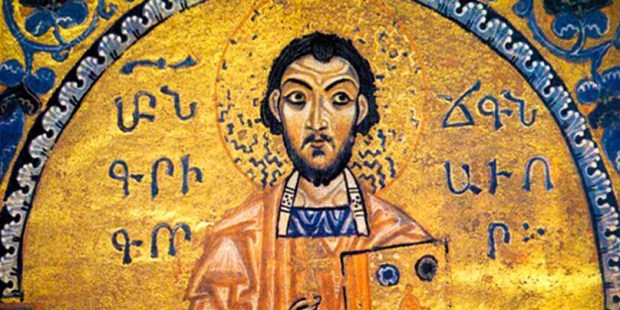 Get to know this fascinating and inspiriting Armenian saint, our 36th Doctor of the Church

St. Gregory of Narek was a saint, priest, mystic, composer, astronomer, theologian and poet, honored as the first poet of Armenia and revered by Armenians as a “watchful angel in human form.” He is now also a Doctor of the Church.

The Vatican announced that following a Feb. 21, 2015, meeting with Cardinal Angelo Amato, prefect of the Congregation for the Cause of Saints, Pope Francis had declared St. Gregory the 36th Doctor of the Church, the first new Doctor since 2012.

Armenia was the first state in history to adopt Christianity as its official religion, and the faith over the centuries has remained a central element in Armenian life. In the 10th century the kingdom of Armenia was in what historians describe as a golden age, with great achievements in literature, art and architecture. That era of progress ended in the late 11th century with the invasion by the savage Seljuk Turks and then later the Mongols followed by centuries of war and bloodshed that climaxed with the genocide of 1.5 million Armenians during World War I by the Ottoman Turks. St. Gregory was a leading light in the era of the Armenian cultural renaissance and a source of comfort and courage in the often grim centuries that followed his death in 1003.

Gregory grew up in a family of Church leaders. His father was a bishop and theologian and his uncle was abbot of the famed Narek Monastery on the shores of Lake Van in eastern Anatolia (in modern Turkey) that was a center of Armenian spirituality. Gregory spent most of his life as a monk, priest and teacher at Narek, but little else is known about him beyond the treasure of his writings.

His first notable work — written when he was still quite young — was a commentary on the Song of Songs that was commissioned by an Armenian prince. It revealed immense theological depth and was succeeded by letters, odes, songs, poems and Armenian liturgical chants. His masterwork was his last, the Book of Lamentations, called also the “Narek” and simply “The Prayer Book.” Gregory intended it to be his last testament, an “encyclopedia of prayer for all nations … its letters like my body, its message like my soul.”

The Book of Lamentations is a collection of 95 prayers in 366 chapters intended to express the sighs of a “broken and contrite heart” in a way that might be pleasing to God. Composed in old classical Armenian in 1003, probably as Gregory suffered from a terminal illness, it is a complete school of prayer for every Christian. It is deeply personal in tone and expresses the cry of the soul separated from God but also giving its Creator all due worship and praise. It combines the candor of St. Augustine’s Confessions with the grandeur of the Psalms and the vivid images and themes of the wisdom books of the Old Testament with one goal: “Speaking with God from the depths of the heart.”

Gregory’s Book of Lamentations was the source of consolation and guidance for generations in times of immense suffering. His monastery survived for a thousand years but was destroyed by the Turks during the genocide. Armenians lost Narek, but they still have the book they call by that name in his honor, and many Armenians have traditionally slept with a copy of the work under their pillows.

The pope celebrated Mass for the Armenian-rite faithful on April 12, 2015, in St. Peter’s Basilica, a solemn commemoration of the Armenian genocide one century ago, and a celebration of the newest Doctor of the Church.

The title of Doctor of the Church is bestowed on a saint because of his or her renowned holiness and also the significant contributions he or she made to the teachings of the faith. Typical of Pope Francis, the choice of Gregory as the 36th Doctor was entirely unanticipated. Francis accepted the recommendation of the Congregation for the Causes of Saints that Gregory be named a Doctor and considers Gregory’s teachings both timely and consistent with Francis’ own hopes for the Church. Gregory’s teachings have proven valuable to the Armenians and countless others over the last millennium, and the pontiff is encouraging Catholics to learn from this jewel of Eastern Christianity. It is also a gesture to Eastern Christians who are suffering so greatly in the face of Islamic extremism.

The words of Gregory, too, are consonant with Francis’ call on all Catholics to reach out to God in our brokenness with humble and contrite hearts. As Gregory wrote in the Lamentations, “Hear the prayers of my embattled heart for mercy, when I cry out to you, ‘Lord,’ in my time of need.”

Matthew Bunson is OSV’s senior correspondent. This piece first appeared in OSV Weekly and is used here with kind permission.