Mother Angelica Dead: Tributes From Catholics in Media Pour In 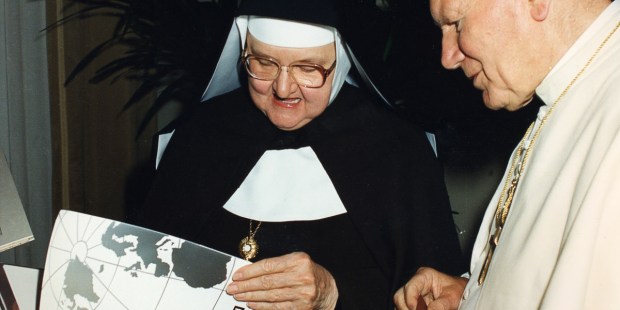 Founder of EWTN passes at 92. Those who knew her reflect on her life, work and devotion to Christ

News of the passing on Easter Sunday of Mother Angelica, PCPA, foundress of EWTN and a paradoxically innovative “traditional” nun, brought swift tributes from religious and secular Catholics who work in media and were eager to share their memories and appreciations:

Fr. Thomas Rosica, CSB: CEO, Salt and Light Catholic Television Network
How fitting that Mother Angelica would be called home on Easter Sunday 2016. This great woman of faith, evangelical boldness and joyful courage was one of the Church’s great instruments of the First Evangelization and the New Evangelization. She did in her lifetime what Church leaders in the USA had attempted for many years and never succeeded: founding a Catholic television network and media outlet that would serve the world. I shall never forget my first meeting with her in 2001 as I prepared to lead World Youth Day 2002 in Canada. Her sage advice, encouragement and promise of prayers at that time, shortly before her debilitating stroke, revealed a woman of great faith and creativity. She remained steadfast and joyful in the midst of her own personal suffering in her early years and her long suffering at the end of her life. Now that the torch is passed to another generation of staff and colleagues, may we all learn from her zeal, loyal witness, ingenuity and deep faith in God and her trust in good people around her. May the Risen Lord and Eternal Word welcome her into the peace of God’s kingdom.

Bishop Christopher Coyne, Bishop of Burlington, VT
One cannot help but admire Mother Angelica for her tenacity and her single-mindedness in creating EWTN. To think that this woman religious founded a small broadcast station in a garage of her monastery and was able to grow it into the broadcast and digital giant that EWTN is today is amazing. She certainly was a person of strong personality and opinions and even stronger faith. May the angels lead her into paradise and my the martyrs welcome her into eternal life.

Father Francis Hoffman (“Fr. Rocky”), Executive Director of Relevant Radio
I remember the first time I saw Mother Angelica on TV. It was late night on the Joan Rivers Show in the ’80s. I thought she would be eaten alive, but within minutes she had Joan and the entire audience eating right out of her hand. Mother Angelica’s profound charity and faith, common sense and wit, her piety of a child balanced by her doctrine of a theologian — all of that — brought St. John Paul II’s New Evangelization to the airwaves at a moment when the Church in America needed a “W” in the witness column. Like Joan of Arc and Catherine of Siena, Mother Angelica once again showed that women are not second rate in the Church. May she rest in peace!

Janet E. Smith, moral theologian
It was fun how quickly Mother Angelica and I hit it off in the few interviews I had with her.  During one interview, we were making jokes to the point that I teased her about there possibly being something stronger in her coffee cup than coffee. Luckily she seemed to enjoy that …

She had no time or inclination to put on airs, or to have any kind of false or formulaic piety. She met life head-on and resolutely moved forward in a complete no-nonsense fashion. Undoubtedly, others will speak of her ability to get an international Catholic TV station going when powerful bishops and their organizations could not do so.  She was a simple nun, with a profound faith, and one courageously dependent upon God’s grace to supply what was needed.  Her life and deeds were miraculous. I have great confidence that some day she will be declared to be a saint.

Father Robert Reed, president/CEO the Catholic TV Network
Mother Mary Angelica once served on our board, so I’m proud to say she remains part of the history of both the CatholicTV Network and EWTN. When I was studying Television Management at Boston University I was moved to write on Mother’s savvy and inspired contribution to Catholic Media. Who among us, including Mother, could have predicted the exponential growth of that media so far beyond the TV screen or the the desperate need in these days to catechize and inspire. Thank you for your faithful leadership and strength, Mother Angelica!

Mother Mary Assumpta Long, OP, Prioress General, Dominican Sisters of Mary, Mother of the Eucharist
I had the privilege of knowing Mother Angelica over many years and the unique experience of being with her on her live TV programs. She was tremendously generous in offering free time on EWTN to those who wanted to promote the truths of the Catholic Church she so loved.

Father Mitch Pacwa, SJ, EWTN television host
One of the most important things about her is that she was not an actress. When you saw her at the show, there was no difference from what she was like off the air. She and I played off one another very well because I could tease her where others couldn’t. I remember there was another priest who would come on and started teasing her, and she said to him — on live TV — “Who do you think you are, Father Mitch Pacwa? Settle down.”

Her love of Christ was the most important component of her life. Nothing else mattered to her, and she didn’t worry about a thing except being faithful to Christ. It was the number one issue for her, hands down. She didn’t care who you were or what you said — if it contradicted the faith, she’d shut you down, even if you were ordained clergy …

She was someone with a high school education and came from a contemplative background, which points out that for her prayer was listening to Jesus. She had something to say because she listened to him.

She was still able to speak a little bit until about 2002 or 2003, and she said, “This is my purgatory.” The sisters had told me that for recreation she liked to watch DVDs of I Love Lucy.  So I brought her some DVDs of The Jack Benny Show. They had to cut it off because she was laughing so hard she was having trouble breathing.

Alice von Hildebrand, philosopher
When one meets a person whose one concern is to serve God and his Church, fearing neither difficulty nor suffering, persecution nor ridicule, it marks one for life. I dedicated my recent book, Memoirs of a Happy Failure, to her. She started from nothing. Everything was against her. But she trusted that with his help, she could spread the Gospel to the world through EWTN. It edges on the miraculous.