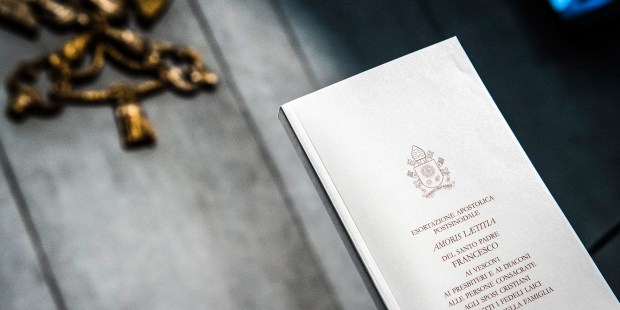 • The pope’s Apostolic Exhortation, Amoris Laetitia, is long — really long — 60,000 words, 325 paragraphs, 256 pages. That’s unfortunate. I’m convinced that the length of a Church document is inversely proportional to the number of people who will read it and the impact it will have, especially in our fast-paced digital age.

• Nonetheless, perhaps because of its content or the pope’s style, it has the unique ability to simultaneously please and disappoint just about everyone who reads it. The letter, like its author, is enigmatic. And that’s not necessarily a bad trait. Jesus was often enigmatic too.

• Traditionalists who have worried about the erosion of Catholic moral values can relax. Amoris hasn’t overturned any fundamental moral values professed by the Church. Fornication is still a sin; adultery is still a sin; homosexual acts are still sins; and marriage is still between one man and one woman.

• I wonder if the enormous attention given to Amoris will push some of the pope’s other documents and programs into the background — for example, Evangelium Gaudium, Laudato Si, the reform of the annulment process and the Jubilee of Mercy. How many initiatives can we absorb and promote at the same time? Respectfully, Holy Father — please take a break, and give us a breather too!

• In the long run, one of the most consequential statements of the document might be this one: “We have been called to form consciences, not to replace them.” (#37)

• Toward the beginning of the letter, the pope confronts one of the hot-button issues of the day, so-called “gender theory.” He writes: “This ideology leads to educational programs and legislative enactments that promote a personal identity and emotional intimacy radically separated from the biological difference between male and female. … It is a source of concern that some ideologies of this sort manage to assert themselves as absolute and unquestionable, even dictating how children should be raised. … Let us not fall into the sin of trying to replace the Creator.” (#56, 2)

• I was very pleased to see the pope’s strong condemnation of abortion: “If the family is the sanctuary of life, the place where life is conceived and cared for, it is a horrendous contradiction when it becomes a place where life is rejected and destroyed. So great is the value of a human life, and so inalienable the right to life of an innocent child growing in the mother’s womb, that no alleged right to one’s own body can justify a decision to terminate that life.” (#83)

• The pope takes on the celebration of weddings themselves. In words sure to challenge the priorities of some brides and grooms and their families, he says: “Short-term preparations for marriage tend to be concentrated on invitations, clothes, the party and any number of other details that tend to drain not only the budget but energy and joy as well. The spouses come to the wedding ceremony exhausted and harried. … Here, let me say a word to fiancés. Have the courage to be different. Don’t let yourselves get swallowed up by a society of consumption and empty appearances. What is important is the love you share, strengthened and sanctified by grace.” (#212)

• The pope’s advice about preparing for weddings seems especially appropriate here in Little Rhody, a location known for hosting so many glitzy “destination weddings, doesn’t it?”

• And moving beyond the wedding day, the pope also has some very relevant advice about parenting: “Only if we devote time to our children, speaking of important things with simplicity and concern, and finding healthy ways for them to spend their time, will we be able to shield them from harm. Vigilance is always necessary and neglect is never beneficial. … Obsession, however, is not education. We cannot control every situation that a child may experience. … If parents are obsessed with always knowing where their children are and controlling all their movements, they will seek only to dominate space. This is no way to educate, strengthen and prepare children to face challenges.” (#260-261, 3)

• Some people complain that celibate old men, because they lack personal experience, have no right to lecture others about marriage, family life or parenting. Hmm … given the enormous worldwide discussion of the pope’s letter, it seems to me that lots of people are keenly interested in what at least one “celibate old man” has to say on the topic. Really, who else would you rather get marriage advice from: Bill Clinton? Donald Trump?

• Amoris Laetitia is a very substantial work. It is filled with relevant insights and healthy challenges, firmly grounded in the Catholic tradition. As I suggested previously, like a fine red wine it should be sipped and savored, not chugged all at once. Or, as Cardinal Sean O’Malley said far more eloquently, “Rather than try to draw immediate conclusions from the text, we are urged to reflect upon it and to ponder, patiently and carefully, what the teachings will mean for the Church and her ministry to families.

Most Rev. Thomas J. Tobin was installed as the eighth Bishop of the Diocese of Providence on May 31, 2005.