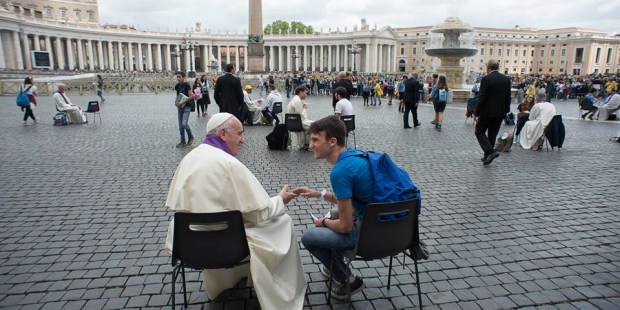 We imagine the intro: “Hi, I’m Francis. My friends used to call me Jorge; did you know this is his feastday? Let’s slay some dragons — tell me your confession …”

The Holy Father administered the sacrament of reconciliation to 16 teenage boys and girls gathered in St. Peter’s Square for the Jubilee for Teens.

With the Jubilee for Teens in full swing in the Vatican and around Rome, the Holy Father made the surprise visit to participate in the event.

He was joined by more than 150 other priests who offered the sacrament of reconciliation to thousands of teens throughout the day.

The Jubilee for Teens is a three-day event designed especially for youngsters from 13 to 16 years old with the theme “Merciful like the Father.”

In a message sent earlier this year, Pope Francis told those travelling to Rome for the Jubilee, “Don’t just prepare your rucksacks and your banners, but your hearts and your minds as well.”

Special welcome tents are set up all over Rome for the event, and thousands of teenagers have flocked to the city to participate in the festivities.

The Jubilee for Teens event culminates with a Mass presided over by Pope Francis on Sunday morning at St. Peter’s Square.