Prince, the Lyricist: Attention Must Be Paid 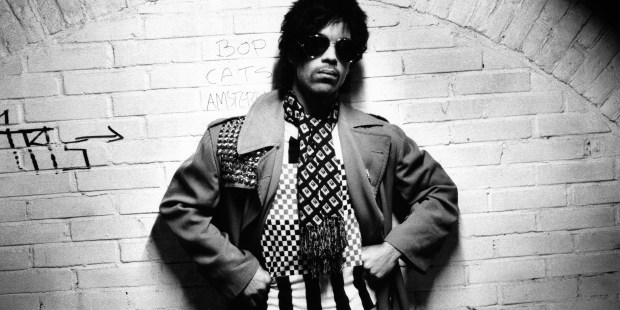 Beyond the beat, His Purple Majesty often seemed to take a line through Leonard Cohen

It sounds strange, I know: for years Prince has been one of the few artists I listen to during Holy Week.

They say that death and sex are twin fascinations. The fact that Prince songs overindulged in the second obsession means that I have mostly stayed away from his work. But ever since an old friend, PC Muñoz, introduced me to his genius in college, I have been able to benefit from Prince’s truly profound thoughts on the end of life.

Prince the musician gets a lot of credit, but I haven’t seen as much attention paid to Prince the lyricist. He is like Leonard Cohen: unafraid to make public his intimate life both with women and with God, and gifted with the ability to express them both in an evocative language all his own.

“The Ladder,” from the album Around the World in a Day, is a great song for Holy Thursday. It is a parable about our longing for a king whose kingdom is not of this world.

“Once upon a time in the land of Sinaplenty / There lived a king who didn’t deserve to be. … Now this king he had a subject named Electra … For him each day she had a smile, but it didn’t matter. / The king was looking for the ladder.”

“Everybody’s looking for the ladder
Everybody wants salvation of the soul
The steps you take are no easy road
But the reward is great for those who want to go.”

His vision of encounter with salvation is Eucharistic: “A feeling of self-worth will caress you / The size of the whole wide world will decrease. / The love of God’s creation will undress you / And time spent alone my friend, will cease.”

It is also deeply honest. He knows that God does not automatically bless and welcome us. We have to choose him, each day, with actions — something we are not likely to do. But if we do, there comes an intimate encounter and closeness with God that we would not have thought possible.

The full extent or staying power of Prince’s religious conversion has never been clear, and the album Sign o’ the Times demonstrates why. The album is a long version of the signature theme of Prince’s that is so clear on 1999: The world is going to end soon, so let’s party.

Prince was continually like one of the children of Israel torn between the Golden Calf and the stone tablets. But there in the midst of that eclectic album, which goes from hip-hop “Housequake” to the Joni Mitchell tribute “Dorothy Parker,” is the song “The Cross,” filled with a longing for Christ crucified.

The song journeys through a land with “Ghettos to the left of us, flowers to the right,” where a destitute and starving pregnant mother sings. But the song promises:

The song keenly feels how wrong the world is, incomplete and unsatisfying. It offers history’s only answer to evil: The cross.

“Black day, stormy night / No love, no hope in sight / Don’t cry, he is coming / Don’t die without knowing / The cross.”

Musically, it builds from a quiet lilting melody to a heavy urgent grunge in which the singer can barely keep emotion from stopping his voice — a long, dark crescendo of longing that cannot be resolved except by something bigger. That bigger thing never comes.

It is one of history’s dramatic ironies that the author of the classic death song “Sometimes it Snows in April” died in Minnesota as an April cold front moved in.

The song is a farewell poem to a dead friend, a kind of pop In Memoriam. The friend is Christopher Tracy, Prince’s character in the movie Under the Cherry Moon, and the chorus sees in his death a pattern everything must follow:

“Sometimes it snows in April
Sometimes I feel so bad, so bad
Sometimes I wish that life was never ending
But all good things, they say, never last …
Love isn’t love until it’s past.”

The song’s parallels with Christ’s story are clear: A Christopher whose death has redefined April; a friend who we will see again. Springtime used to be about “lovers holding hands in the rain.” Now April is about Christopher’s death. Christopher was strong, “unafraid of the death that left me hypnotized,” and now his passing marks the end of his suffering: “I guess he’s better off than he was before / A whole lot better off than the fools he left here.”

The song warns us that the world will break all of its promises but that, nonetheless, God will one day keep them.

I must confess that I don’t listen to Prince on Easter Day. I think he was looking for Easter his whole life, but I have never heard him sing about resurrection with the passion he reserved for sex or death.

One of the many Prince songs that is disqualified for me because of its content is the song “Temptation” from Around the World in a Day. It describes sexual temptation in fairly explicit language and sounds like just another virtuoso but awkward Prince song until a deep voice breaks in at the end: the voice of God.

God: “Oh, silly man, that’s not how it works. / You have to want her for the right reasons.”

It takes a deeply conflicted person to put both the part and last part of that song together and release it to the public. But that was Prince.

The dialogue ends with the singer’s words to God:

Yes, now you understand. I pray that we will too. Good-bye.