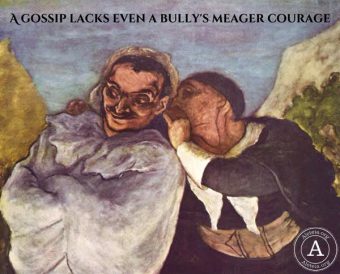 I don’t know why, but there is a dark joy in gossiping.—Pope Francis

At a conference, once, I found myself sharing an elevator with someone I knew by reputation and by the few tart exchanges we had shared on social media. As Dorothy Day has noted, it’s a funny thing about what happens to people who have regarded others as “the other.” They may try to ignore each other completely, or attempt to get away from each other as fast as possible after basic civilities, or some will actually try to be human to each other.

In our case, trapped in an elevator, we tried being human. Agreeing that God has a sense of humor, we shook hands and chatted our way into the ballroom toward which we both were heading. Discovering that neither of us suited the caricatures we had created in our minds, we made a friendly parting. “I can’t snark at you,” came a charming complaint as we sought out our respective places. “I only just met you, and now the only thing I know about you is that you’re short.”

“And fat,” I agreed. “And the only thing I know about you is that you’re tall. It’s amazing how much you know about someone until you actually meet them.”

“Yes, but it ruins the gossip.”

That was very right; once you encounter a person, all the easy animosities and the willingness to gossip lose their tang of righteousness and dark joy.

People tend to think of women as supreme gossipers, but in my experience some of the biggest partakers of the “dark joy” have been men — and often precisely the sort of manly men who would bristle at the notion that they could succumb to a habit so small and so “feminine.”

Recently, I was alerted to an old social media thread where some fine manly men — upstanding Catholics, to boot — had gossiped about me “like a couple of washerwomen,” as the cliche goes. I knew it was gossip because they’d taken care to ensure that I would not be tagged or alerted in the usual manner.

As I read, I was mostly amused — Honoré Daumier’s Crispin and Scapin seemed to perfectly capture how I imagined them in the act — but also rather saddened by it. Not so much by what they were saying; their back-and-forths were ridiculous mewlings about “free junkets to Rome” (where can I find one, and sign me up, please …), a very strange things for two men — who present themselves as serious people, vastly superior to unserious empty-headed me — to obsess on.

But even if their speculation was accurate, and I hadn’t depleted my frequent flier miles and run up my credit cards on trips to Rome (I apologize for nothing …), why would it be their business, anyway?

It wouldn’t, unless their gossip was founded on something else, like envy or just simple hatred. Envy is a burden I wouldn’t wish on anyone. Hatred is common, but I never expected many people to love me, so I can bear it.

But still, the indulgence in gossip is unhealthful for the spirit. George Harrison had it just right when he called it a “soul-betraying so-and-so; the devil’s radio.”

Still, the problem with gossip is that it is always founded on something like envy or wrath; its venom acts as a compounding agent for deeper sin.

I write about that in my latest book, Little Sins Mean a Lot: Kicking Our Bad Habits Before They Kick Us:

It’s a funny thing about that venom, though. If its deployment is discovered, its toxicity seems to deepen; its wounds become spread out, and lasting. But even if the object of our pssting never knows that we struck, somehow the poison redounds back upon us anyway, and shrivels our souls just a little more, because gossip – slithery sin that it is – slinks its way through the deadly sins, and pride, and wrath, and envy stick to it (and perhaps, sometimes, even the other four, as well), and then we’re carrying an awful lot of spiritual sickness with us.

Talk about toxicity! Gossip dehumanizes the people we’re talking about by selling their dignity for a few cheap, ego-puffing observations; it dehumanizes us for the purchase.

In Strange Gods I suggested that idolatry was one sin almost never brought up in the confessional. I wonder if gossip might be another, since so often we think it’s simple righteousness. The sad truth is this: a gossip lacks even a bully’s meager courage.

[Editor’s Note: Take the Daily Poll — Do You Partake in the “Dark Joy”?]