Pope Francis Celebrates “Jubilee of Tears” for All Who Weep 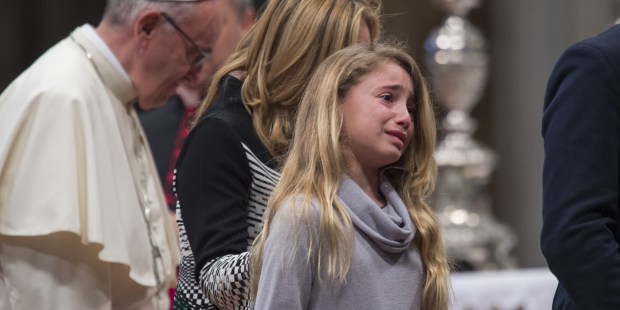 “Jesus, too, knows what it means to weep.”

VATICAN CITY — Pope Francis on Thursday presided at an evening prayer vigil in St. Peter’s Basilica, to express one of the great spiritual works of mercy: “to console the afflicted.”

The prayer vigil “to dry tears” coincided with the Vatican’s traditional celebration of the Solemnity of the Lord’s Ascension into Heaven. The vigil began with three testimonies. The first was offered by a family who lost a son and brother to suicide.

A second testimony came from a Catholic Pakistani journalist who was forced to flee his country as a political refugee with his family, after Islamic terrorists threatened their lives.

The third witness was given by twin brothers who, having sought happiness in the delights of this world, experienced a conversion to Christ through their mother’s prayers and tears. In each of the three witnesses, faith in Jesus Christ was decisive in transforming suffering into hope.

The testimonies alternated with scriptural readings and the lighting of a candle before the reliquary of “Our Lady of Tears” of Syracuse, which was brought especially to the Vatican for the vigil, to be venerated by the faithful.

After the reading of the Gospel of the ‘beatitudes,’ Pope Francis delivered a consoling address in which he told those present that “in our pain, we are not alone,” since “Jesus, too, knows what it means to weep.”

During the vigil, intercessory prayers were also offered, particularly for Christians who are being persecuted for their faith; victims of medical experimentation and all forms of slavery; children who are suffering or abused; the sick; those who live in loneliness, abandonment, and desolation; and those who are grieving the loss of a loved one.

Here below we publish the official English text of the Pope’s address.

After the moving testimonies we have heard, and in the light of the word of the Lord that gives meaning to our suffering, let us first ask Holy Spirit to come among us. May he enlighten our minds to find the right words capable of bringing comfort. May he open our hearts to the certainty that God is always present and never abandons us in times of trouble. The Lord Jesus promised his disciples that he would not leave them alone, but at all times in life he would remain close to them by sending his Spirit, the Comforter (cf. Jn. 14:26) to help, sustain and console them.

At times of sadness, suffering and sickness, amid the anguish of persecution and grief, everyone looks for a word of consolation. We sense a powerful need for someone to be close and feel compassion for us. We experience what it means to be disoriented, confused, more heartsick than we ever thought possible. We look around us with uncertainty, trying to see if we can find someone who really understands our pain. Our mind is full of questions but answers do not come. Reason by itself is not capable of making sense of our deepest feelings, appreciating the grief we experience and providing the answers we are looking for. At times like these, more than ever do we need the reasons of the heart, which alone can help us understand the mystery which embraces our loneliness.