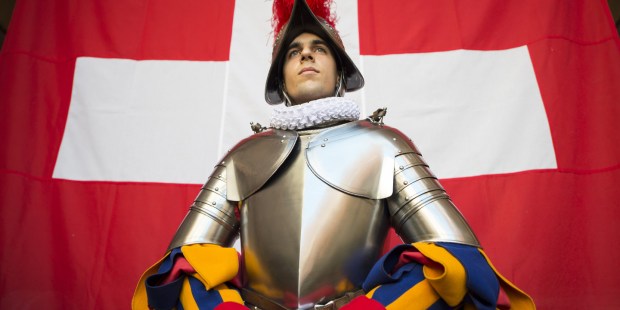 New swiss guard stand during a swearing-in ceremony in Vatican City, on May 6, 2016.

What is their primary weapon?

VATICAN CITY — Twenty three new recruits of the Pontifical Swiss Guard on Friday made their solemn oath of loyalty to protect the pope, in an annual May 6 ceremony commemorating the 147 guards who, in 1527, lost their lives defending Pope Clement VII during the Sack of Rome.

The guards began the day by attending Holy Mass in St. Peter’s Basilica, celebrated by Vatican Secretary of State, Cardinal Pietro Parolin. In his homily, the cardinal reminded new recruits that “such a heroic death…would not have been possible without faith in the Lord of Life.”

“Sustained by this faith in the Risen Jesus, and strengthened by the experience of joy that the Lord gives life in fullness, I invite you, dear Guards, to have the courage to be witnesses in the world today, despite the difficulties,” the cardinal said.

“Be witnesses of Christ — even in your own homeland, Switzerland — and in a world that desires light and life but often does not have the courage to accept it, in the midst of your young peers, who hunger for meaning and fulfillment, so that you may tell them that it is worth proposing great and beautiful things, although this involves commitment, dedication and will require some toil,” he said.

Later on Friday, the new recruits solemnly swore their oath of loyalty at a ceremony in the historic St. Damaso Courtyard, in Vatican City, in the presence of religious figures, political and military representatives of the Swiss Confederation, and relatives and friends of the guards.

During the ceremony, the chaplain of the Pontifical Swiss Guard solemnly reads the oath:

“I swear I will faithfully, loyally and honorably serve the Supreme Pontiff Francis and his legitimate successors, and also dedicate myself to them with all my strength, sacrificing if necessary also my life to defend them. I assume this same commitment with regard to the Sacred College of Cardinals whenever the See is vacant.

Furthermore, I promise to the Commanding Captain and my other superiors, respect, fidelity and obedience. This I swear! May God and our Holy Patrons assist me!”

One by one, the new recruits are then called by name. Each advances alone, and with his left hand grasps the Guard’s standard, holding high his right hand with three fingers open, as a symbol of the Most Holy Trinity, Father, Son and Holy Spirit; he confirms the oath:

“I, . . ., swear I will observe faithfully, loyally and honorably all that has now been read out to me! May God and his saints assist me!”

Swiss Guard Commander, Colonel Christoph Graf, described the 23 new recruits as “men of God, and a sign of hope in a world filled with trouble.” The “combatants rosary” is their primary weapon, he said, as they work to defend the Pope and the faith.