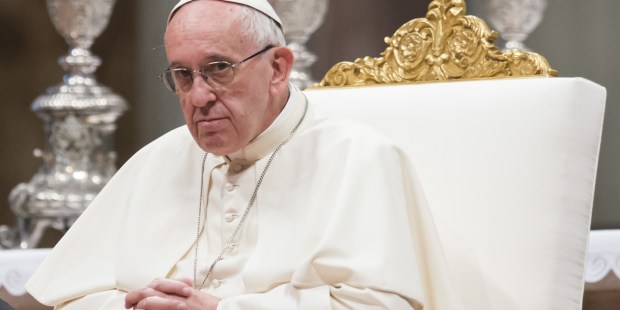 The Holy Father’s full remarks actually seem to be signaling women NOT to expect a change, and to seek other possibilities …

VATICAN CITY — Pope Francis’ announcement yesterday that he intends to set up a special commission to study the nature and role of deaconesses in the early Church has garnered much attention.

The pope’s meeting on Thursday, May 12, in the Vatican’s Paul VI Hall, with 800 women general superiors from across the globe, took place in the form of dialogue, in Italian, and was structured around three questions.

Given the attention the pope’s announcement has received, here below we publish an English translation of the second question of the official transcript released by the Vatican, regarding women deacons.

Second question — on the role of consecrated women in the Church:

Consecrated women work already work very much with the poor and the marginalized, they teach catechesis, accompany the sick and the dying, distribute Communion, and in many countries lead the common prayers in the absence of priests, and in those circumstances deliver the homily. There exists in the Church the office of permanent deacon, but it is open only to men, married and unmarried. What prevents the Church from including women among the permanent deacons, just as happened in the primitive Church? Why not set up an official commission to study the question? Can you give us some examples of where you see the possibility of a better inclusion of women, and of consecrated women, in the life of the Church?

Pope Francis: This question tends toward “doing”: Consecrated women already work very much with the poor, they do so many things… toward “doing.” And it touches on the issue of the permanent deaconate. Someone might say that the “permanent deaconesses” in the life of the Church are the mothers-in-law [he laughs; they laugh]. In fact, this existed in ancient times: there was a beginning … I remember it was a topic that interested me somewhat when I would come to Rome for meetings and stay at the Domus Paulus VI; there was a Syrian theologian there, a good man, who did the critical edition and translation of the hymns of St. Ephrem, the Syrian. And one day I asked him about this, and he explained to me that in the early days of the Church there were some “deaconesses.”

But what are these deaconesses? Were they ordained or not? The Council of Chalcedon (451) speaks about it, but it is somewhat obscure. What was the role of deaconesses at that time? It seems — that man told me, who is dead; he was a good professor, wise, erudite — it seems that the role of the deaconesses was to help with the baptisms of women, the immersion, they were baptizing them, for the sake of decorum; also to anoint the bodies of women in baptism. And also something curious: when there was a marriage trial, because the husband was beating his wife, and she went to the bishop to complain, the deaconesses were charged with looking at the bruises left on the body of the woman from her husband’s beatings and informing the bishop.

This, I remember. There are a number of publications on the diaconate in the Church, but it is unclear what it was like. I think that I will ask the Congregation for the Doctrine of the Faith to inform me about the studies on this topic, because I have responded to you based only on what I heard from this priest — who was a scholarly and true researcher — about the permanent diaconate. And also I would like to set up an official commission to study the issue: I think that it will be good for the Church to clarify this point; I agree, and I will speak, to do something of this kind.

You then say: “We agree with you, Holy Father, who have repeatedly shown the need for a greater role of women in decision-making positions in the Church.” This is clear. “Can you give us some examples of where you see the possibility of a better inclusion of women, and of consecrated women, in the Church?”

I will tell you something that comes after, because I saw that there is a general question. Consecrated women must go to the consultations, the assemblies of the Congregation for Religious: this is for certain. Consecrated women must go into the consultations on the many problems that are presented. Another thing: better inclusion. At the moment, concrete things do not come to mind, but again, as I said before: to seek the opinion of consecrated women, because women see things with an originality different than that of men, and this is enriching: both in discussions, and in decision-making, as well as in concrete reality.

The work you do with the poor, the marginalized, teaching catechesis, accompanying the sick and the dying, is very important “maternal” work, where the motherhood of the Church can be expressed more. But there are men who do the same [work], and it is good: consecrated men, hospital orders… And this is important.

Therefore, on the deaconate, yes, I accept, and a commission that clarifies this well seems useful to me, especially regarding the early days of the Church.

Regarding a better inclusion, I repeat what I said before. If there is something to concretize, ask it now: concerning what I said now, are there further questions that will help me to think? Go ahead…

[Editor’s Note: Take the Poll — How Do You Feel About the Notion of Female Deacons?]