Crying at a Funeral for Someone I Never Knew 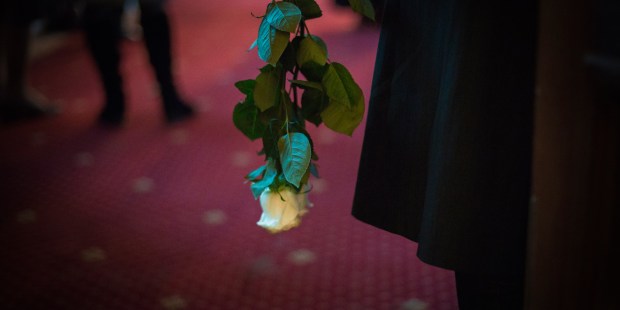 I recognized his agony, and I knew his brokenness.

Where are the philosophers? Where are the experts? And where are the debaters of this age? Do you not see how God has shown up human wisdom as folly? —1 Cor. 1:20

As I sit in a crowded, dark chapel with a life-sized photo of a man and his son illuminated at the front, I recognize his agony. A week prior, I would not have known this Adam if I ran into him at the grocery store or while getting my oil changed, but in this dark room I know him. I see his final moments, whatever pushed him to the edge. It’s the same hopelessness. It is the same isolation. I cry. I am angry. I can’t help myself. His family, in the front, in tears and silence. Why? We all have experienced moments in life where we feel despair, separation, as though we’re on an island — the sense that surely no one has ever been here before. Mostly we wait for another day. He didn’t. Human wisdom has no words. What is there to say?

I was at the funeral to be present for his mother. I knew how the conversation would go: “I’m sorry. We are here for you.” I expected the encounter with her, but was not prepared for sitting in the back fighting my own tears. Why the connection? I know where he was when his life ended. I do not know how he got there. But with the human heart, the whys manifest in a million different ways. What matters is knowing his brokenness. I know the island. The isolating belief that no one cares. A grain of sand in a sea of despair. I know the experience.

All men are one at the wellspring of pain and joy.
—Henri Nouwen

A decade ago, as I sat in the back of a vacant, lit chapel with the crucifix and an empty tabernacle illuminated in the front, I recognized Christ’s agony. What led me here was one of a million experiences, seeking deliverance from the same isolation every Adam and Eve have experienced before me. Instead of a way out, though, I was given a way through.

It was Good Friday so there was no Mass. No Eucharist. Christ had died. I looked at the empty tabernacle, and then at the crucifix, and back at the tabernacle. In a matter of seconds, the heaviness of the Christian message came hurtling at me from nowhere, and it hit. I sat there in tears, feeling His death unfold. And as one of a billion Adams, I recognized that I was with Him, on a cross of my own devising. And there, I first understood the mysterious connection between sorrow and joy.

Now, almost a decade later I find myself in the back of a dark chapel hemorrhaging grief for the loss of a man I had not personally known. But unlike the revelation on Good Friday years ago, no joy was to be found.

The Capacity of Christian Hope

Only the man who has had to face despair is really convinced that he needs mercy.
—Thomas Merton

I wept for this Adam because I am him. My nature finds me grappling with my own littleness, isolation, and sinfulness. I seek to bridle my nothingness. Time and again I am thwarted by impotence. But here is precisely where our stories diverge.

Mine takes a different turn because, in a chapel on the day we mourn the death of Jesus, I was blessed to find my nothingness was cause for celebration. I encountered Christian hope, which understands the darkness of the Cross through the light of the Resurrection, reconciles our fragile dependence and our inscrutable inheritance, makes kings of paupers and paupers of kings.

Christian hope is rooted in the knowledge of God’s ability to transform water into wine, death into life, and maybe most miraculously an unworthy heart into a worthy one.

And I sat in the back of the dark chapel overcome with an unshakable sadness. This tragedy is avoidable. Time and again it happens, and at its root is the same reason. We are lost human beings seeking Eden. Most of us have no idea how to manage the gamut of experience that comes from the first fall. Some of us allow ourselves to be rescued while others leave behind loved ones to carry the added burden of self-doubt. And this is the most difficult revelation of that afternoon. That he left behind his loved ones without ever understanding that his inherent value was not one of skill or possession, but of being a child of God.

Michael Morris resides in the hipster jungle of Denton, Texas where he raises a gaggle of girls with a wife who is undoubtedly the better parent.  He can be followed on Twitter @laffyjaphy.