A Beer Crafted Carefully, Prayerfully and with a Holy Rule 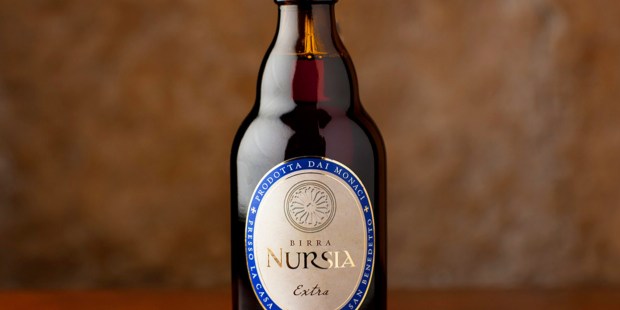 The little town of Norcia is becoming well known around the world, not only because it is the birthplace of Saint Benedict and Saint Scholastica, or even for the town’s famous wild-boar sausages. Norcia is gaining recognition because of the monks who live there – because of their recent hit recording of Gregorian Chants and, since April, their debut into the U.S. beer market.

Nestled in a beautiful valley in central Italy, Norcia is home to the Monastero di San Benedetto and the many young Benedictine monks who live there. Reestablished in 1998 by a group of American monks, the monastery has been thriving, and recently began to experiment with different ways to support their way of life.

Saint Benedict ruled that monasteries need to be self-sufficient and able to support themselves through work. Father Cassian Folsom, founder and prior of the Norcia monastery, decided to explore the growing business of specialty beers in order to create needed income for the monastery. He explained to NPR that they “started brewing beer three years ago … [by learning] the art of brewing from the Trappist monks in Belgium, and found a niche in the Italian market, because craft beer is becoming much more popular in Italy than in the past.”

The brewing of beer has been a monastic business since at least the Middle Ages, so it was only fitting that the Benedictines in Norcia found their own brewery.

Since the inception of Birra Nursia, the monks have striven to make it a true monastic endeavor — one that is operated by the monks and not some commercial company. Father Benedict Nivakoff recently told the Los Angeles Times that “For us, it was really important that the monks do everything …We have control over every step of the process.” After being brewed at the monastery, the beer is shipped to a distributor in Southern California and then delivered to your door. Father Benedict said, “One of the ways we can be successful is to have very few middlemen.”

The brewery fits perfectly into the monks’ daily schedule of prayer, which only allows them certain blocks of time for work. Father Benedict explained how the monks “get up at 3:30 in the morning … pray seven times a day, [are] in and out of the church every hour — there isn’t a lot else we can do, besides the brewery.”

When questioned how much beer the monks consume, Father Benedict admitted, “Not a small amount. We have very high [commercial] standards, so a lot of things that don’t meet our standards come to the monks’ table.”

According to Brother Augustine Wilmeth, the monastic beer has been well received in Italy: “There was initially such high demand we quickly began working on expanding our production capacity shortly after the brewery opened. We also get high compliments from beer connoisseurs and lovers of Belgian style monastic beers.” It is because of this success that the monastery was able to expand its distribution to the U.S., offering customers two beers: a blond ale and a Belgian strong ale.

The brewery has also been an opportunity for evangelization, as Father Cassian explained to Raymond Arroyo. “Beer – good beer especially – is a bridge between the monks and the rest of the world.” Even an atheist can talk to a monk about beer.

For anyone interested in purchasing Birra Nursia, it is currently only available online. For those who want to continually support the monastery through their purchase of beer, the monks have created a “Brewmonks’ Club,” whose members purchase a 6-pack or case of beer every month for a year. It’s a great way to support the monks, who will in turn be praying for you with every sip of beer.