Visit the Oldest Marian Shrine in the United States: The Shrine of Our Lady of the Milk 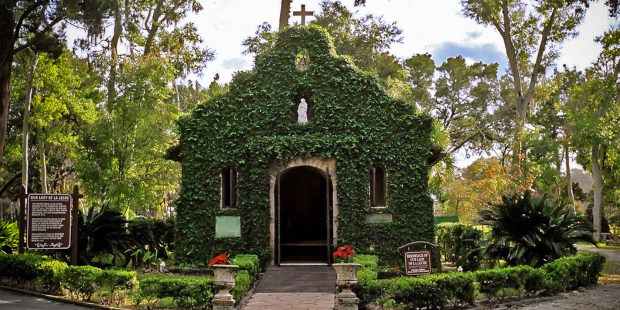 On the grounds of the Mission of the Name of God in Saint Augustine, Florida, is the site of a shrine of a most ancient devotion

Saint Augustine, in the northeast of Florida, proudly lays claim to be the oldest European settlement in US soil. It is indeed, without a doubt, the oldest continuously-occupied European-founded town in the United States.

It is not at all strange, then, that on the grounds of St. Augustine’s Mission of the Name of God (one of the first churches in what would become the United States) we also find the first North American shrine ever dedicated to Our Lady. But, curiously enough, the shrine is dedicated to an early Christian devotion that can be tracked back as far as the fourth century, in the Holy Land: devotion to Our Lady of the Milk.

A grotto located east of the Nativity Church, in Bethlehem, is known as “the Grotto of the Milk.” Tradition says that, during the flight to Egypt, the Holy Family stopped here to get some rest. While the Virgin Mary was nurturing the Baby Jesus, a drop of her milk fell to the floor. The rock on which it fell immediately turned white.

Nowadays, the “Grotto of the Milk” in Bethlehem is visited by both Christian and Muslim women who ask Our Lady’s intercession for their own children, so they can grow healthy and well nurtured. This devotion spread all throughout Europe, specially after the Crusaders returned from the Holy Land.

Spanish settlers who came to St. Augustine in the 1600s brought with them their devotion to Nuestra Senora de la Leche (Our Lady of the Milk). A miraculous statue of the Madonna and Child under this title had been set up in the Madrid cathedral by King Philip III. A replica of this statue was brought to St. Augustine and set up in a special shrine built by settlers and Native American converts on the grounds of the Mission.

Pilgrims may still visit this shrine today, and walk the grounds of the place where the Church was first firmly planted in what would later become the United States.