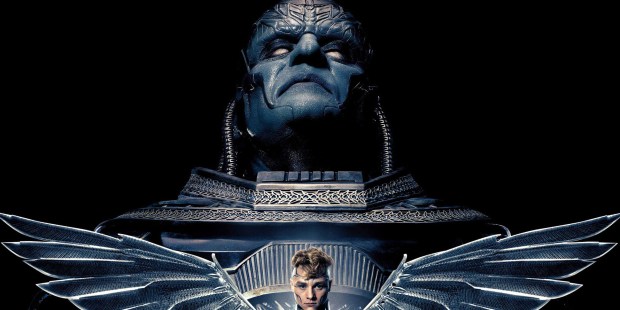 Here are some random thoughts that passed through my mind as I watched X-Men: Apocalypse.

With that, perhaps I need to get into what X-Men: Apocalypse is all about. (Caution: mild spoilers.) The story begins in an Egyptian pyramid in the year 3600 BC, where a powerful mutant named En Sabah Nur is undergoing a ritual to transfer his consciousness into the body of another unnamed mutant (Oscar Isaac). Each time En Sabah Nur jumps bodies, he gains the power of his new host, which in this case would be a Wolverine-like healing factor that will make him all but immortal. However, fed up with En Sabah Nur’s delusions of godhood, the local populace sets off an elaborately designed trap which sinks the entire pyramid into the desert sands, killing En Sabah Nur’s mutant henchmen, the Four Horsemen, and entombing the would-be deity beneath the earth. How a bunch of slaves managed to construct this Rube Goldberg-esque device without anyone noticing is never explained, but regardless, it’s a visually stunning set piece.

We then jump forward to the 1980s, where Professor Xavier (James McAvoy) is busy enrolling students into his school for “gifted” youngsters. Among his new recruits are younger versions of heroes we’ve seen before, such as Cyclops (Tye Sheridan), Jean Gray (Sophie Turner), and Nightcrawler (Kodi Smit-McPhee). Mystique (Jennifer Lawrence), on the other hand, has abandoned the school to escape the unwanted fame gained after saving the life of the President in the previous film. Finally, there’s Magneto (Michael Fassbender), who has changed his identity and started a new family in Russia.

This first part of the film is actually a lot of fun as the new kids test their powers and sneak out to catch a screening of Return of the Jedi (leading to a one-liner that may be the whole reason director Bryan Singer made this film to begin with). The movie also manages to tug a few heartstrings after Magneto inadvertently exposes his identity while saving a co-worker, leading to a tragic confrontation between his family and the frightened locals.

Oddly, though, the film starts to run out of steam just when it should be kicking into high gear. Unearthed by a mutant-worshiping cult, En Sabah Nur begins to assemble a new group of Horsemen that includes Magneto, younger versions of Storm (Alexandra Shipp) and Angel (Ben Hardy), and new mutant Psylocke (Olivia Munn). Speaking of whom, here’s another random thought; why is it that Psylocke is the only character in the film to retain her comic-book costume, which consists of a skintight one-piece bathing suit complete with chest window? Oh wait, she just leaned into the camera, now I get it. At any rate, after assembling his new team, En Sabah Nur decides the modern world needs to be cleansed, so he adopts the name Apocalypse and sets about to destroy all of humanity.

From there, the movie devolves into a series of action scenes which, other than another show-stealer featuring Quicksilver, all feel a bit perfunctory. Worse yet, while the movie toys with religious themes, it never does much with them. A brief glimpse in the opening credits of Jesus carrying his cross proves to be irrelevant to anything that happens in the film. Nightcrawler is seen praying, but unlike the similar scene in the second X-Men film, it appears to be only to set a mood of hopelessness rather than have an actual effect on any of the characters. And while the movie sets the stage for some religious discussion by having Apocalypse claim to be the inspiration for all of mankind’s concepts of God (an idea mercifully rejected by most everyone in the movie), it never comes to fruition or has any bearing on the outcome of the film. Incredibly, the recent Batman v Superman is actually more successful dealing with its religious themes than this film.

Still, X-Men: Apocalypse is not really a bad movie, it just has a disappointing second half that squanders a good setup. But hey, if the film gets too bad of a reception, they can always go back in time in the next movie and erase everything that happened, right? That would be the X-Men thing to do.