The Inspiring Story Behind the Chewbacca Mom 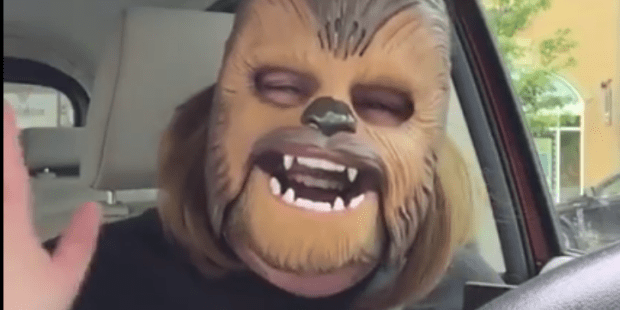 Who knew that a video of a woman hysterically laughing while wearing a Star Wars Chewbacca Mask would attract nearly 150 million views in one week? Candace Payne, the Texas mother behind the mask, certainly did not. Nor did she expect to be invited to appear on Good Morning America and The Late Late Show with James Corden; to be given a basket of gifts from the Kohl’s store where she purchased the mask, or to be invited to California for an exclusive tour of Lucasfilm, where the Star Wars films are produced.

At the same time, she knew that true joy is what attracts people and gives them life. In an interview with the Christian Examiner, Payne said how, “As far as the joy aspect, it is much deeper than the Chewbacca mask… It was fun watching it go viral and fun watching people get some joy out of it, too, but at the core of real joy is faith.”

Payne has been a worship leader at her local church in Texas since she was 14 and believes that joy is something that naturally comes when you have a deep faith in God. She commented on the unfortunate negativity in the world, saying, “If I am going to say anything … our world that we live in has a dark cloud over us that keeps us feeling like we can’t ever experience deep joy daily … It really is about thanking God for every single thing we have. When you have a heart that is grateful, we laugh more.”

Speaking at a youth conference Payne told the participants that if you want to do great things in this world you need to be diligent, have patience and obey God’s will. She also warned the youth not to seek fame and fortune for their own glory, “When He tells you move, move. When He tells you stop, stop. When He tells you to indulge in the delights of my table, indulge. But when He tells you that’s not yours, you can’t have it, step away. Do not try to make a name for yourself, His name will always out-shadow yours.”

Ever since her video went viral, Payne has been receiving comments and e-mails from people who are thankful for her video. She told Good Morning America how one woman said, “She has an autistic daughter that hadn’t laughed in two months. She said every time she showed her the video, she laughed and laughed.” Others have credited Payne for getting them out of depression and anxiety, while others simply can’t stop laughing.

In the end, Payne wanted to share the “simple joys” in life and credits God for the success. She doesn’t know what God wants of her at this point, but she is certain that He wants to bring more joy to people’s hearts.

[Editor’s Note: Take the Poll – Are You as Joyful as Chewbacca Mom?]