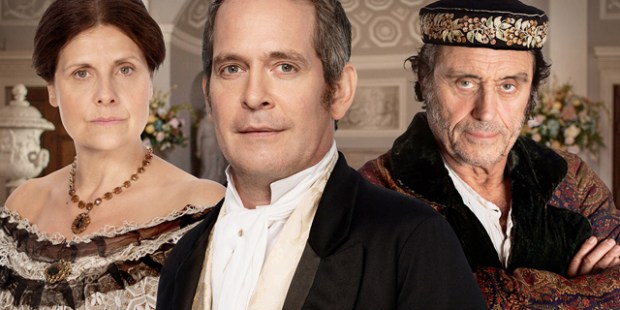 Downton Abbey creator Julian Fellowes has returned to delight audiences with another tale of “love, envy, lust and greed, of arrogance and vanity, and false values, but mainly of love.”

With the new series, Doctor Thorne, Fellowes isn’t writing an original script as he did with Downton, but has adapted the writings of 19th-century British novelist Anthony Trollope.

The astute Downton viewer will remember ‘way back to Season 1, episode 3, when Evelyn Napier describes the foxhunt as “something out of a Trollope novel.” For most of us (myself included) the reference was lost; that is, until now.

Available as an Amazon exclusive, Dr. Thorne is set in 1850s England. It is the story of a doctor whose wisdom and prudence have given him the confidence of the wealthiest in the county. When his niece, Mary Thorne, whom he has raised since her childhood, becomes embroiled in noble affairs, Dr. Thorne shows himself to be ever the wise gentleman. Included in the storyline are catty cousins, aspiring politicians wholly unsuited to the job, ruthless mothers, secrets of the past, and brandy. Lots of brandy.

Fellowes provides an introduction and a “debriefing” before and after each 42-minute episode. In the first of these, he introduces viewers to the remarkably prolific and well-traveled Trollope, who was an intriguing character. He had a troubled youth, caught in the trap of being a member of the gentry class, but without any money. Although he went to the best schools, he was bullied, which lead him to extensive daydreaming. After finishing at Cambridge, he failed the bar because he couldn’t control his temper. When several other business ventures went south, including a failed farm, Trollope took a job at the post office, where he was disliked. Though a poor civil servant, he was promoted to a post office in Ireland, mainly so his supervisor could get rid of the irascible young man. His new supervisor saw the good in him and the young Englishman rose to the occasion, becoming a model employee. He went on to flourish within the post office and was a high-ranking civil servant when he retired early.

His writing career started in Ireland shortly after he got married. Trollope, whose mother had been a well-known writer, turned out novel after novel with a disciplined schedule. His early books featured Ireland, but political tumult meant that most readers in the U.K. weren’t sympathetic to Ireland, so he eventually moved his settings and his family back to England. From there his novels took off, freeing him from the post office, but not before he invented the public mailbox.

Victorian era themes of marriage and love, enmeshed in the tangles of class and fortune, run through Trollope’s work. He is credited with having a deep sense of human nature, painting with precision the rich interior landscape of his characters.

Trollope’s fame didn’t end with his life, but continues to this day. The Trollope Society is active and promotes a set of penetrating quotations that reveal Trollope’s deep insights into human nature:

“Her happiness, like that of most of us, was ever in the future,—never reached but always coming.” –The Way We Live Now

“Last days are wretched days; and so are last moments wretched moments. It is not the fact that the parting is coming which makes these days and moments so wretched but the feeling that something special is expected from them.” –Small House at Allington

“God is good to us, and heals those wounds with a rapidity which seems to us impossible when we look forward, but is regarded with very insufficient wonder when we look backward.” –The Bertrams

Many of Trollope’s novels are readily available, including a Kindle collection of his most famous works, The Chronicles of Barsetshire, which includes Dr. Thorne.

Particularly satisfying for viewers accustomed to watching season after season of Downton Abbey and then left hanging between seasons, wondering what would happen next, Dr. Thorne ends with the sweetness of a proper resolution.