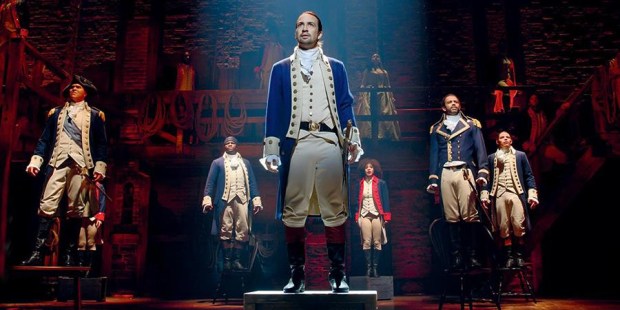 Lin-Manuel Miranda weaves a personal story along with the political one, offering lessons on both mercy and the hope of grace

Lin-Manuel Miranda’s rap-infused musical Hamilton justly took home the Tony award for Best Musical (and 10 other Tony awards to boot). While Treasury Secretary Alexander Hamilton’s political career is what fuels the rap battles in the show (yes, there’s a number about national debt policy), Miranda weaves a personal story alongside the political one, offering lessons on the hope of grace.

At the end of the first act of the show, Hamilton is happily married, has just had his first son, and is the newly appointed Treasury Secretary. And if the first act of a show ends happily, someone’s going to come along to ruin things in Act II.

That someone is Hamilton himself, who commits adultery, is blackmailed, and winds up publicly confessing his betrayal of his wife. When he succumbs to Maria Reynolds in their duet “Say No to This” he narrates his own actions to the audience, positioning himself as powerless. In his telling, everything is converging on adultery, and it would require a superhuman effort for him to prevent his own sin.

First, he tells us that he is just plain too tired to resist temptation (“I hadn’t slept in a week / I was weak / I was awake”) and then he tells us that his tempter is similarly passive, simply following the path of least resistance. When she draws him onto the bed, he sings “She … let her legs spread.” Inertia carries them both forward, with scarcely anything a matter of choice or culpability.

Still, Hamilton begins to pray before giving in, singing “Lord, show me how to / Say no to this / I don’t know how to / Say no to this.” But his prayer doesn’t seem to be answered. Hamilton keeps narrating his mistake, continuing to erase his own responsibility. He tells the audience “In my mind I’m trying to go / then her mouth is on mine and I don’t say ‘No.’”

What could have strengthened his will? Maybe the courage to choose a more humiliating way of responding to temptation.

In Therese of Lisieux’s The Story of a Soul, she describes her own last-ditch response to temptations that overwhelm her: “Sometimes when the temptation was very severe, I would run like a deserter from the battlefield.” And she isn’t speaking metaphorically.

In one story she tells, St. Therese was fighting with a fellow nun, and couldn’t find the strength to do the right thing, so she simple ran out of the room:

[M]y last chance of safety lay in flight. No sooner thought than done. I hurried away, but my heart beat so violently, I could not go far, and I was obliged to sit down on the stairs to enjoy in quiet the fruit of my victory. This is an odd kind of courage, undoubtedly, but I think it is best not to expose oneself in the face of certain defeat.

Hamilton doesn’t flee. And he doesn’t get any better at beating temptation when he confronts it; despite his resolutions, he keeps going back to Maria. Eventually, his affair becomes a public scandal. His private sin wounds his marriage, ends his political career, and, ultimately, is responsible for the death of his son (who loses a duel in defense of his father’s honor).

The choice he refused to acknowledge as a choice kept rippling out, leaving no part of his life undamaged. If Hamilton was tempted to despair at his own weakness before, this should be enough to blot out all hope. If he couldn’t simply leave the room to avoid a sin, he has no power to undo the effects of the sin.

Luckily, Miranda’s play acknowledges that grace doesn’t depend on Hamilton’s strength. In “It’s Quiet Uptown” the chorus narrates the grief of Hamilton and his wife Eliza: “See them walking in the park, long after dark … They are trying to do the unimaginable.” When I saw the number for the first time, I assumed the unimaginable thing that the lyrics referred to was a parent losing a child.

However, at the turn of the number, as Hamilton keeps walking with the silent Eliza, one soloist sings:

There is a grace too powerful to name
We push away what we can never understand
We push away the unimaginable
They are standing in the garden
Alexander by Eliza’s side
She takes his hand
Forgiveness. Can you imagine?

The grace of forgiveness is larger than the horror of losing a child or the betrayal of adultery. It’s so large as to be unimaginable until (and even after) the moment that it is offered.

Perhaps one reason that Hamilton couldn’t imitate St. Therese and flee temptation is that he had no idea what he would be running toward. The largeness of God’s mercy (and his wife’s) was too much to be believed until he experienced it.

Unless we can have faith in the unimaginable depth of mercy, there’s nowhere to run from temptation. Sin will seem to exceed the power of salvation. When Hamilton falters, he begs for the will to say “No” to his temptation, but he leaves out any plea for something to say “Yes” to in his marriage.

As Eve Tushnet writes, “You can’t have a vocation of ‘No.’” And it’s hard to face down or flee temptation with a purely negative prayer. Persevering isn’t a matter of just not choosing sin, but of choosing God instead. St. Therese knows where she’s running to when she flees from temptation, and, if Hamilton could have imagined how deeply he was loved by God, he might have had the will to follow in Therese’s footsteps.