‘I thought you thought’ … and we both got it wrong 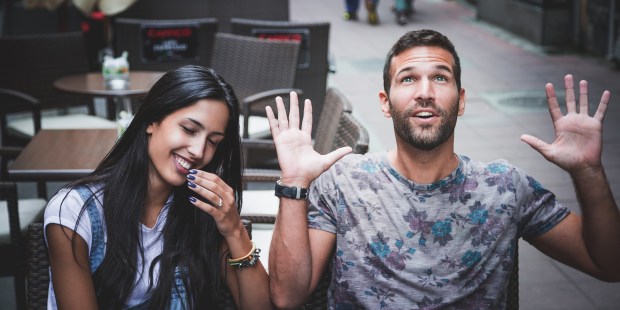 How I learned that true respect requires sitting down to talk

Barry stood out most in my spring 1999 Intro to Acting class. I soon learned that everyone really called him Burry, short for Boruch, and that Barry was his “English name.” I would probably have found him attractive, but the yarmulke to me meant off-limits. I wasn’t particularly religious at the time, and even when I had been, I had no problem with interfaith dating. But I knew that for him it was a problem.

It was a triumph that I didn’t drop the acting class after my humiliating attempt at pantomime the first day. Later in the semester, we had a different class exercise, which involved everybody moving around on the classroom “stage” and taking in ours the hands of whomever we ended up facing when we stopped.

I lived in a neighborhood that we described as having turned Orthodox Jewish about a decade earlier, but I had most of my information about Jews from movies, like The Seventh Sign, which I saw when I was 13. From watching it, I knew that Burry would not be allowed to touch a female at all, other than a wife if he’d had one and maybe (maybe) close family. A Gentile like me had to be extra off limits.

So when he and I ended up facing each other, I didn’t offer my hands, and I tried to avoid his without looking like I was trying to avoid them. I guess I meant to communicate through my awkward nonchalance that I understood and accepted what I figured was one of those 613 commandments.

He managed to take my hands anyway and I left them limp, not wanting to participate any more than I had to in this apparent violation of his concept of God’s law.

More to read: The Secret to Knowing Who You Are

Months later, for the fall semester, I was enrolled in Intro to Theater Production. The class had a co-requisite of a one-credit practicum. I chose costume shop. Guess who was also doing costume shop for a different class’ requirement? Burry.

He remembered me from acting. For a few hours once or twice a week, we’d sit across a table from each other while trying to sew, and he’d talk to me as if I were someone peers talked to. I was so shy at the time I rarely managed conversation with would-be friends, so I definitely missed Burry’s company when he wasn’t working in the shop at the same time I was. I still considered him absolutely off-limits and did not need to talk myself out of daydreaming about him, despite being generally prone to hopeless attractions; I guess, for all that was utterly wretched about me at the time, I respected others’ attempts not to offend God.

At one point, the acting class hand-holding thing came up in costume shop conversation. I believe Burry was the one who first mentioned it, saying he’d figured I must have a problem with holding a guy’s hand because I was Catholic. I was truly surprised, and told him I’d thought it was the other way around. Then I asked how he knew I was Catholic. He said, “Who else names their kid Theresa?” The question may as well have been, “What Jew names their kid Theresa?” since where we lived in Brooklyn, you could all but assume that a white girl was either Jewish or Catholic.

Since Burry was into blogging even before blogs became so much a part of life, I have occasionally looked him up on the Internet since our last afternoon in costume shop more than 15 years ago. But I still am considerably more reluctant to email or “friend request” a now-married Orthodox Jewish man who was any part of my young, single days than I am almost anyone else. I guess I’m still respecting the extra distance between us his culture seems to require, though I could be just as wrong about that as I was about holding his hand.