Dostoevsky’s “Crime and Punishment” hits the stage in NYC 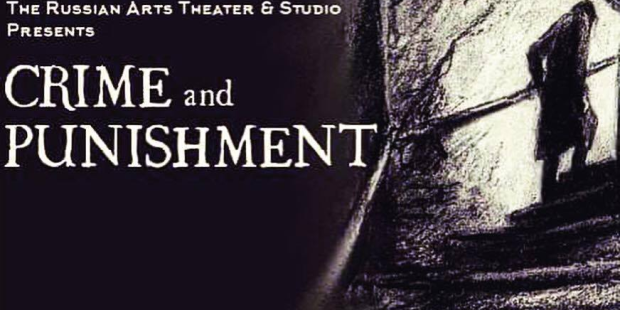 Great novels – especially modern novels where so much of the action occurs internally – are notoriously difficult to dramatize.

Authors like Faulkner and Joyce describe their characters so well that no amount of gesticulation and articulation can really capture what they’re going through in quite the same way.

Dostoevsky has always been one of those writers. Every effort to bring novels like Notes from Underground or The Brothers Karamazov to stage or screen is doomed to pale in comparison to the original work. Their greatness is inextricably linked to their form.

Di Zhu was apparently up for the challenge. Zhu, an actress and trained pianist who appeared in Whiskey Tango Foxtrot, has adapted Dostoevsky’s classic work Crime and Punishment for an Off-Broadway production, working with longtime collaborator and director Aleksey Burago of the Russian Arts Theater to bring her vision to life. The result is a retelling of a tortured young academic that is deeply inventive – sometimes to a fault – and that manages to hit all of the major notes of Dostoevsky’s work.

The play opens on Raskolnikov (played by a shaggy-haired, boyish David A. Russell) wandering over a bridge in St. Petersburg while busier, happier people pass him by. The stage is sparse – that bridge, which is transformed by the actors into either a bed or a table depending on the scene, is one of just a few props – and the cramped theater is the perfect environment to enter into the claustrophobic mind of Dostoevsky’s character. Behind him, candles burn brightly under Christian icons in two rooms, one where the impoverished teenage prostitute Sonya (played beautifully by Zhu) reads from her Bible, and another in which Sonya’s mentally and physically ill stepmother plays the piano.

A stupefied Raskolnikov then meets Sonya’s father, who talks drunkenly about destitution, crucifixion, and salvation. A choir even surrounds him at one point to underscore his monologue. “Do you understand, sir,” he later asks Raskolnikov, “what it means to have nowhere else to turn?” (He doesn’t – at least, not yet.)

In this first third of the play, Zhu and Burago do a fantastic job capturing the bawdy, rowdy characters and crackling dialogue of Dostoevsky’s writing. But as Raskolnikov goes on to murder a local pawnbroker and her half-sister, and even as he goes on to be tormented by delusions and paranoia, the audience may begin to worry whether Dostoevsky’s philosophical intentions were lost in translation.

They won’t worry long. Soon enough, Raskolnikov is discoursing with the local investigator Petrovich about an article he wrote on crime in an academic journal. The thesis of the article – that the superior man is above the law, and is entitled to commit crimes that mere ordinary men can’t – naturally raises Petrovich’s suspicions. “What about his conscience?” the investigator asks. Raskolnikov – a highly intelligent man who nevertheless is clearly abstracted from himself – answers: “Let him suffer… that will be his punishment, more than any prison sentence.” This discourse from Crime and Punishment has inspired some great films, from Rope to The Machinist – and for good reason. From here on, Zhu and Burago never lose sight of the animating force of Dostoevsky’s novel: the moral and spiritual state of a “heart unsettled by theories.”

For Burago, we need to pay special attention to Raskolnikov’s desire to be a Napoleonic figure “beyond good and evil.” “With the presidential election just around the corner, I think Crime and Punishment is now more relevant than ever,” the director says. “It is a cautionary tale of how arrogance leads to the suffering of others — and ultimately, ourselves. When a human being believes himself to be superior, even in the tiniest degree, it is the beginning of his spiritual destruction.”

Zhu and Burago’s adaptation ends with a major misfire – a rock song that feels needless and even tacky, especially against composers like Tchaikovsky and Smetana used earlier – but on balance, the adaptation is a success that creatively brings Dostoevsky’s vision to life. To see Raskolnikov unravel before your very eyes, and the eternally faithful Sonya try to put him back together again, is well worth the price of admission.

Crime and Punishment is playing at the West End Theater (263 W86th Street) now through August 28th, Tuesdays through Sundays at 8 pm.