Was the world’s oldest copy of the Gospel really found in an Egyptian funerary mask? 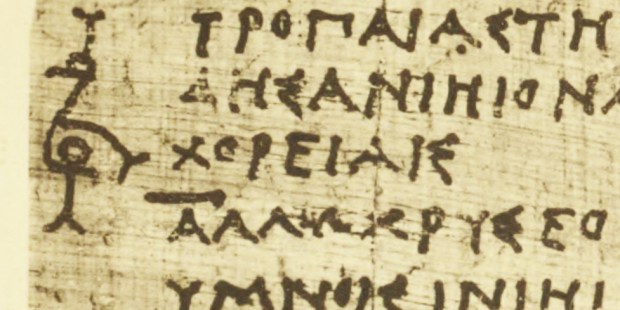 It is a fragment of the Gospel of Mark, so far dated between AD 80 and 90, but there is still work to be done

Not all ancient Egyptian funerary masks were made of fine materials or precious metals. While pharaohs and senior officers could afford golden funerary masks, most had to settle for masks made out of linen or papyrus’ sheets glued together, as in some sort of early papier-mache-like technique. However, considering papyrus was also not excessively affordable, already-used sheets of papyrus were often, let’s say, “recycled.” That is, masks were commonly made out of papyri which had already been written on. That’s how this copy of the Gospel of Mark ended up in an Egyptian funerary mask.

Professor Craig Evans, of the Evangelist Acadia University in Canada, said that some techniques that allow removal of the glue used to stick together all these layers of papyrus without damaging the ink have been recently developed. Thus, specialists have managed to recover not only biblical documents (as in the case of this copy of the Gospel of Mark) but also copies of classical Greek texts, as well as personal documents, used to make these masks.

The discovery of this copy of Mark’s Gospel is particularly important since, until now, the oldest copies of the New Testament texts available have been determined as written in the second century. The fragment in the funerary mask would now be the oldest known neo-testamentary literature document even found, as it has so far been dated as belonging to the late first century, roughly between the years 80 and 90.

It is known that Mark wrote his Gospel in Rome, while accompanying Peter. This copy might have traveled from Rome to Egypt, as professor Evans explains, according to the blog State of Israel: “In the Roman Empire, postal services worked at nearly the same speed it does now. A letter written in Rome could be read in Egypt in a few weeks. Mark wrote his Gospel at the end of the 60s AD, so it was possible to find a copy in Egypt in the 80s.”

However, there are still details to be confirmed. In principle, even though it is assumed that this is a fragment of the Gospel according to Mark, no one (that is, apart from the members of the team who made the discovery) knows specifically which text is to be found in the fragment. Allegedly, the discovery was made in 2013, but it has been kept in secret until all details are confirmed, but a member of the team accidentally leaked some preliminary information.

Of course, dating a document using paleographic techniques tends to give inaccurate results, precisely because paleography is not itself an exact science, as the papyrologist Brice Jones told CNN. The same expert also recalled that Carbon 14 techniques do have a margin of error, sometimes even of about a century. In addition, professor Evans is not himself an archaeologist, a papyrologist or a paleographer, but a New Testament scholar so, at least according to Jones, he might lack the authority to announce this fragment really is the oldest copy of the Gospels found to date. At least, for now.