Pope Francis: “In this world at war, we need fraternity” 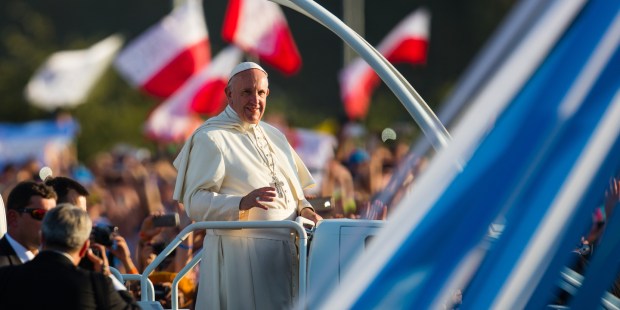 Pope Francis reflects on recent trip to Poland, and visit to Auschwitz

VATICAN CITY — Pope Francis today recalled his silent visit to Auschwitz last week and remembered the “many men and women today who suffer from war” throughout the world.

The Holy Father made his remarks during a general audience on Wednesday – the first since suspending his weekly appointment with pilgrims and tourists for the month of July, and the first since his return from Poland for the 2016 World Youth Day.

The Pope began by reflecting on his recent trip to Poland. In his discourse, he drew attention to the “festival of colors, different faces, languages, of different histories” present at WYD. The young people, he said, “gave a sign of hope, and this sign is called fraternity.”

He added that “in this world at war, we need fraternity; we need closeness; we need dialogue; we need friendship. And this is the sign of hope: when there is fraternity.”

His silent visit to Auschwitz was “more eloquent than words,” he said.

In his address, the pope also remembered the untimely deaths of a young World Youth Day participant and an Italian journalist who died during the event.

Here below is a translation of the Pope’s full address.

Good morning. Today I would like briefly to reflect on my recent Apostolic journey to Poland.

The occasion of the Journey was World Youth Day, 25 years after the historic celebration in Częstochowa shortly after the fall of the Iron Curtain. Over the past 25 years, Poland has changed, Europe has changed, and the world has changed, and this WYD has become a prophetic sign for Poland, for Europe and for the world. The new generation of young people, heirs and successors of the pilgrimage begun by St. John Paul II, responded to the challenge of today. They gave a sign of hope, and this sign is called fraternity. Because, in this world at war, we need fraternity; we need closeness; we need dialogue; we need friendship. And this is the sign of hope: when there is fraternity.

Let us begin with the young people, who were the first reason of the Visit. Once again they responded to the appeal: they came from all over the world — some of them are still here! [he points to pilgrims in the Hall] — a festival of colors, different faces, languages, of different histories. I don’t know how they do it; they speak different languages, but they manage to understand one another! And why? Because they have the will to go forward together, to build bridges, and fraternity. They came also with their wounds, with their questions, but above all with the joy of meeting one another; and once again they formed a mosaic of fraternity. We can speak of a mosaic of fraternity. An emblematic image of the World Youth Days is the multicolored sea of waving flags by the young people. In fact, at WYD, the nations’ flags become more beautiful. They are, so to say, “purified,” and even flags of nations in conflict are waving side by side. And this is beautiful! There are the flags here … let’s see them!

Thus, in their great Jubilee encounter, young people from around the world have welcomed the message of Mercy, to carry it everywhere through their spiritual and corporal works. I thank all the young people who came to Krakow! And I thank those who joined us from every part of the world! Because in many countries small World Youth Days were held in connection with the one in Krakow. May the gift you have received become a daily response to the Lord’s call. A remembrance full of affection goes to Susanna, the Roman girl from this diocese, who died immediately after having participated in World Youth Day, in Vienna. May the Lord, who certainly welcomed her into heaven, comfort her family and friends.

During this journey I also visited the Shrine of Częstochowa. Before the icon of Our Lady, I received the gift of the Mother’s gaze, who in a particular way is the Mother of the Polish people, of that noble nation which has suffered so much, and with the power of faith and her maternal hand, has always risen up again. I have greeted several Poles here [in the Hall]. You are good, you are good! There, under that gaze, one understands the spiritual sense of the journey of this people, whose history is bound indissolubly to the Cross of Christ.

There one touches with the hand of faith the holy faithful people of God, which has preserved hope amid trials; and it also preserves that wisdom that is a balance between tradition and innovation, between past and future. And Poland today reminds all of Europe that there can be no future for the continent without its founding values, which have the Christian vision of man at its center. Among these values is mercy, whose two great apostles were children from Polish soil: Saints Faustina Kowalska and John Paul II.

Lastly, this trip has the world as its horizon, a world called to respond to the challenge of a “piecemeal” war that is threatening it. And here the great silence of the visit to Auschwitz-Birkenau was more eloquent than words. In that silence, I listened. I felt the presence of all the souls who have passed beyond. I felt the compassion and mercy of God, which some holy souls were able to bring even into that abyss. In that great silence, I prayed for all the victims of violence and war. And there, in that place, I realized more than ever the value of memory, not only as a memory of past events, but as a warning, and responsibility for today and tomorrow, so that the seed of hatred and violence do not take root in the furrows of history.

And in this remembrance of wars and of so many wounds, of so much pain experienced, there are also many men and women today who suffer from war, so many brothers and sisters. Looking on the cruelty in that concentration camp, I immediately thought of the cruelties of today, which are similar: not as concentrated as in that place, but everywhere in the world; this world that is sick with cruelty, pain, war, hatred, and sadness. That is why I always ask you to pray, that the Lord give us peace!

For all of this, I thank the Lord and the Virgin Mary. And I renew my expression of gratitude to the President of Poland and the other authorities, to the Cardinal Archbishop of Krakow and to the entire Polish episcopate, and to all those who, in a thousand ways, made this event possible, who have offered a sign of fraternity and peace to Poland, to Europe and to the world. I would also like to thank the young volunteers, who have worked for more than a year to carry forward this event; and also the media, those who worked in the media: thank you very much for having allowed this Day to be seen all over the world. And here I cannot forget Anna Maria Jacobini, an Italian journalist who lost her life there, suddenly. Let us pray also for her: she died as she was serving.