This Ohio shrine to Mary is nothing short of miraculous 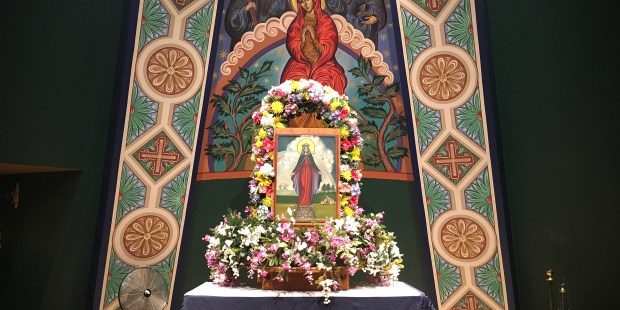 A replica of Lebanon’s Our Lady of Lebanon, the shrine has been designated a pilgrimage site with a Holy Door for the Jubilee Year of Mercy

YOUNGSTOWN, OHIO — The U.S. Maronite Shrine to Our Lady of Lebanon in Youngstown Ohio is a place of special and “miraculous” significance, especially on the Solemnity of the Assumption of Mary.

Every year, in a triduum leading up to the Aug. 15 feast day, faithful of the Maronite Church make a pilgrimage to the Shrine — a replica of Our Lady of Lebanon in Harissa, Lebanon.

Since 2014, it has been considered a minor papal Basilica, and has been designated as a pilgrimage site with a Holy Door for the Jubilee Year of Mercy.

But miracles have been associated with it from the beginning. The choice of the Shrine’s site came to a Father Peter Eid in 1960 while he was driving home along Lipkey Road. He noticed a sign that read, “Property for Sale, 80 Acres.”

But the owner of the property told Fr. Eid that she “will never sell to a Catholic.” He tried to explain that a house of prayer would be much better than a junkyard or a supermarket, but to no avail. After three visits, Fr. Eid told her: “This is my last visit” but added that he and his friends would be praying for nine days so that the Lord would tell her to sell them the land so they can “build a shrine for His Mother, Mary.”

Father Eid then called his brother and two other priests to pray a novena for the intention. Before the nine days were over, the lady who owned the land called Fr. Eid and said: “Priest, come and take the land. Your Lady is bothering me in my sleep!” It’s said that Our Lady appeared to the owner in a dream telling her she wished a church to be built on the property. Father Eid bought the land and the Shrine project was begun in 1963.

The Antonine Sisters have served at the shrine since the beginning, and today care for the elderly through an adult day-care and newly-built assisted living facility on its grounds. The community’s newly-elected superior, Lebanese Sister Jinane Farah, shared her perspective on the Assumption pilgrimage with Aleteia:

“This is the only shrine of Our Lady of Lebanon in the United States, so for Maronite Catholics this is a chance for them to come and visit Mary, just like you would visit your own mom from time to time,” said Sr. Jinane. “We have a Christian tradition which says that when Mary was assumed into heaven, all the Apostles came and were by her side. This pilgrimage is a symbol of all the churches coming from all over the United States, as well as people visiting from Lebanon who come for the feast.”

The annual Assumption Pilgrimage is a triduum beginning on August 13 with a Latin Mass, often celebrated by the local bishop. On the second day, the Byzantine Divine Liturgy is celebrated, while the August 15 solemn feast is honored with a Pontifical Maronite Liturgy. On all three days an evening candlelight procession is held, which ends with a blessing with the Icon of Our Lady of Lebanon, and the singing of the traditional Maronite hymn to the Blessed Virgin, Ya Oum Allah.

“The hymn says: ‘You are the Mother of God, and you are our Mother. And even though we do not see you, you are never far from us, and you are always with us.’ It is beautiful,” Sr. Jinane told Aleteia.

Asked if she had ever heard of miracles or healings connected at the shrine, Sr. Jinane responded: “A lot.” As well as the miracle of its founding, she said she saw a “miracle” last year.

“On the evening it was originally dedicated years ago it was raining, and during the liturgy a rainbow appeared over the shrine,” Sr. Jinane recounted. “That rainbow is pictured on the icon they carry in procession each evening of the pilgrimage.”

“Last year we celebrated the 50th anniversary of the shrine with the Maronite liturgy outside, and it was also raining,” Sr. Janine continued. “During the procession with the gifts, a beautiful rainbow appeared. The priests didn’t see it, but they people were taking pictures. After the end of the liturgy, we showed the priests and said: “This is our miracle. Mary is here with us.”

Bishop emeritus of the Eparchy of Our Lady of Lebanon, Robert Shaheen, originally from Danbury Connecticut, was the first US native to be ordained to the priesthood from the Maronite seminary in Washington D.C.. Known for his devotion to the Assumption pilgrimage, Bishop Shaheen spoke to Aleteia about his fervor for the shrine since its early days. He quipped: “When the shrine was being built, even before they put the railing on the statue, people were going up and I said: ‘They’re nuts. There’s no rail. Everyone wants to be up there with Mary. If no one gets hurt, this has got to be a miraculous shrine.”

Later assigned in the city of St. Louis, Bishop Shaheen faithfully brought a group of pilgrims to the shrine each year. “I always tell them: ‘This is Mary’s special home in the US,’” he said.

“The Feast of the Assumption is one of the oldest feasts of the Blessed Mother in the Maronite Church. We would never transfer it from a Monday to a Sunday, for instance. We keep the tradition of celebrating in on August 15. In Lebanon they have a solemn day of liturgies and processions and we try to imitate that here.”

“It’s like going home to our Mother’s house,” he said. “Somehow you feel a sense of peace.”

“I think the real miracle is one of healing inside. Pilgrims walk away very comforted, and somehow fulfilled. Even if they don’t get exactly what they prayed for, for example, they say: ‘Well, God said no, and they accept it.”

In his homily at the evening liturgy on the Assumption, Bishop Elias Zaidan, MLM, of the Eparchy of Our Lady of Lebanon in Los Angeles, invited pilgrims during the Holy Year to “be like the little child who comes to see his parents.

“I want to you enter the Holy Door imagining that God the Father, and Son, and Holy Spirit, and the Virgin Mary, are opening their arms to receive all of us and tell us: ‘Welcome, welcome to my home and to your home.’ And as we come in we are seeking mercy from God; and as we leave, we are to extend mercy to one another.”

Drawing a parallel with the Olympics, he then added: “Athletes compete to win the gold, the silver and the bronze. But the Blessed Mother tops them all.”

The faithful are likewise called to receive the medal that only Christ can give, he said, “the medal of eternity.” Each person has to work on that, he said, “and aim and strive every day of our life for heaven.”

“How do we do this?,” he asked. “We do this my imitating Mary, whose life was one of total dedication to God, total humility, total dependence, total trust, and total faith in the Lord.”