Getting a medieval tattoo in Jerusalem 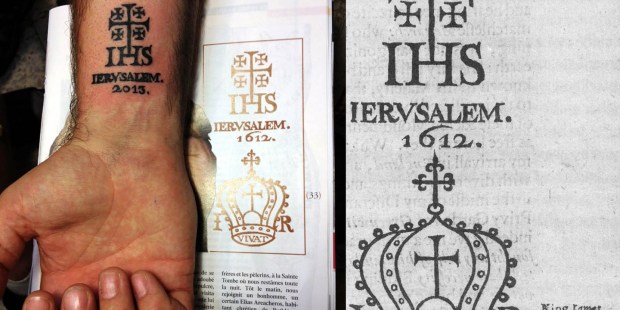 Jerusalem’s “Old City” was, until the mid-19th century, the entire urban area of the Holy City. Today, it only occupies a small area (actually, less than one kilometer) in East Jerusalem, but it is still home to several of the most important religious sites for Jews, Christians and Muslims alike: that’s where you find the Holy Sepulchre, the Dome of the Rock, and the Kotel.

But the Old City is also home to the Razzouk’s tattoo shop. A sign on the door identifies it unequivocally: “tattoo with heritage since 1300.” As read in the great post Atlas Obscura published on the matter, there is actually a Christian tradition of tattoos, which can be traced for over a thousand years back in the past. The first Christians to get tattooed were those born in the Holy Land (and also Egypt, as tattoos were also part of the Coptic tradition) in the 6th century, according to the testimony of Procopius of Gaza, perhaps one of the most important Christian Greek rhetoricians of the Second Sophistry. These pilgrims would get tattoos of the cross and Christ’s name, and took the practice to Egypt, where Coptic Christians soon adopted it as their own. Christians who made the pilgrimage to the Holy Land would also get tattooed, not only as a display of devotion, but also as proof of their having made the trip.

Wassim Razzouk is the current tattoo artist in the family running the shop, heir not only to a long tradition but also to many of the original utensils with which the family has worked for the last centuries, including several wooden stencil blocks that are inked and then applied to the skin to serve as a guide for the final tattoo. Some of these stencils (those with the motifs of the Resurrection, the Crucifixion, the Cross of Jerusalem or St. George, in particular) date from the 1700s, and several other families of tattooists in the Holy Land (Armenians, mostly) had their own, which are passed on from generation to generation. However, today the Razzouks are the owners of the (apparently) only remaining stencil blocks of this kind in the world. And the pilgrims continue to flock to his shop, looking for a lasting memory of their trip to the Holy Land, as many have done since the 6th century.

[Editor’s Note: Take the Poll – Would you get a Tattoo in Jerusalem?]