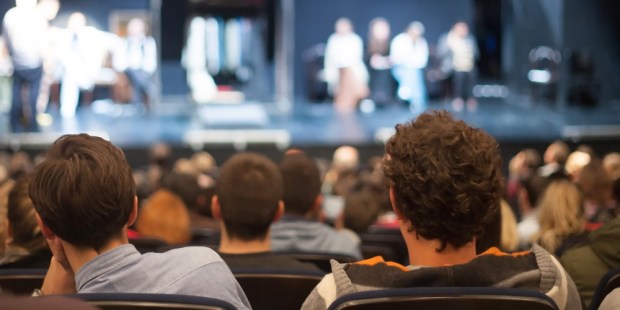 A recent survey presented a troubling picture for religious parents: young Catholics are abandoning faith at an early age, sometimes before the age of 10, largely due to a perceived incompatibility between science and religion.

But help may be on the way in the form of a stage adaptation of a novel that takes on the New Atheism.

The Loser Letters, a 2010 novel by author and researcher Mary Eberstadt, will be presented in dramatic form in Washington, D.C. at the end of the month.

It’s an unusual adaptation for an unusual book. The Loser Letters originally appeared as a series at National Review Online, in the form of letters to the major proponents of the New Atheism from a young Christian woman who had renounced faith altogether. The series was published in book form by Ignatius Press.

When the book was being promoted, theologian Michael Novak insisted that it would do well as a play, and his vision is finally taking shape.

“In the course of these letters, [the protagonist’s] own personal story comes out,” Eberstadt said in an interview Monday. “I wrote this in the heyday of the New Atheism, when all of those atheism books were riding high on the bestseller list. It seemed to me that something was missing from the debate, on both sides, pro or con—a sense of the experiences in life that might drive people toward belief or unbelief. There’s a lot of self-delusion, always, within humanity, and that includes about why we believe what we believe.”

She said she wanted her novel to suggest that part of what explains secularization and the rise of the New Atheism is that people have had life experiences that “don’t square with Christian teaching, and they want very much to be told that it doesn’t matter.”

The production opens at Catholic University’s Hartke Theater September 29 for an 11-night run. Directed by Jeffrey Fiske, who brought The Screwtape Letters to the stage a few years back, it stars Olympic and World Champion gymnast Chellsie Memmel, who takes on a mute role to accompany the main character, played by Madeleine Murphy. The play features the work of Irina Tsikurishvili, a 14-time Helen Hayes Award winning choreographer.

Eberstadt said she aimed the novel at the Millennial Generation because it didn’t seem as if any kind of rational arguments about belief were making inroads into that population.

The new production could be seen as examining another aspect of Eberstast’s recently published book It’s Dangerous to Believe: Religious Freedom and Its Enemies.

“It’s getting harder and harder for Christians to tell their story in the public square on the level of rational argument alone,” Eberstadt said. “People have been saying for a long time that we need more fiction, we need people outside the realm of social science or theology to find a different way of going at these truths. That’s what we’re doing here. We’re trying to deliver a deeply counter-cultural artistic piece that will make people think and empathize with a character instead of resonating with an argument.”