5 Fun feast days to celebrate with your kids 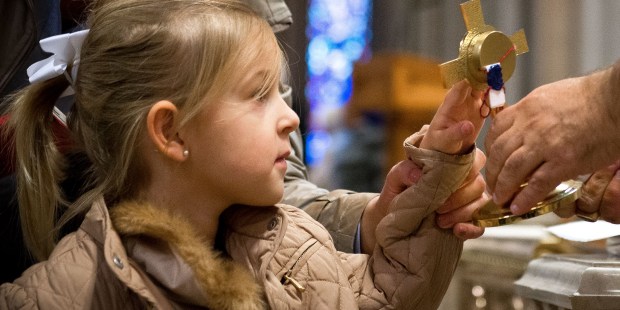 Why not add these lesser known Catholic feasts to your family traditions?

Growing up Catholic, we celebrated all the “biggies”: Christmas, Easter, St Patrick’s Day, and all the Holy Days of Obligation. Smaller feast days? Not so much. More like famine.

As a parent, I’ve aspired to keep the Catholic Cool flowing all throughout the year, and that got me looking into some less-frequently celebrated Catholic feasts we could enjoy as a family. These all have some fun traditions behind them that your kids will be sure to enjoy.

St. Brigid of Ireland easily gets overshadowed by the likes of St. Patrick, but her story has its own charm and fascination. Born into slavery, and having to survive on the milk of a white cow due to her mother’s inability to nurse, Brigid was committed to giving away all of her possessions even at a young age. One story has it that an entire store of butter was resupplied after she interceded on behalf of her mother.

Her feast day has many traditions associated with it, including making a homemade St. Brigid Cross and hanging it over a door in your home, and leaving out cake and butter for her (and corn for her cow) on the eve of her feast. The legend has it that she comes to bless everyone’s crops and gardens once the kids all go to sleep.

Families also have been known to tie a ribbon on the trees outside their home, which are referred to as “St. Brigid’s Mantle” and were thought to have curative powers back in the day.

And don’t forget the food! There’s plenty of awesome Irish food to go around on a feast day like this, including Colcannon, Boxty, and of course, Shepherd’s Pie.

Sure, we all acknowledge the legend of St. Nicholas coming on Christmas to celebrate the birth of Jesus by giving toys and treats to good boys and girls across the world, but many Catholic have taken to celebrating the actual saint’s feast day, rather than only talking about him when it’s time for Santa to slide down their chimney.

A great way to have fun with this feast is to have your kids leave their shoes out as they hit the sack on St. Nicholas’ Eve. Parents work their St. Nick magic, and when the kids wake up they find coins, small treats, or other gifts overflowing from their shoes!

It’s a great way to refocus on being joyful for small things, rather than needing the giant present-fest we’ve become so accustomed to on December 25.

Most of us know Chiara Offreduccio (St. Clare) as one of the first followers of St. Francis. Aside from that, she is known for founding and writing the rule of life for the Order of Poor Ladies (the monastics now known as Poor Clares), as well as for that one time she went out to meet an oncoming army with the Blessed Sacrament in tow, leading to the army becoming seized by fear and retreating.

So, how can we celebrate St. Clare’s feast 800 years later? By having a family movie night, of course!

You see, Pope Pius XII designated Clare as the patron saint of television in 1958, on the basis that when she was too ill to attend Mass, she had reportedly been able to see and hear it on the wall of her room.

With so much of our kids’ movie/television time being dedicated to things that are less than holy, why not celebrate St. Clare by popping some corn and having a family movie night that focuses on truth, beauty, and something uplifting?

St. Barbara is a 3rd-century saint whose story is a difficult-to-parse-out mix of reality and legend.

Barbara, the daughter of a rich Pagan named Dioscorus, was carefully guarded by her father who kept her locked up in a tower in order to preserve her from the outside world. Having secretly become a Christian, she rejected an offer of marriage that she received through him. She eventually met her end via martyrdom on December 4 of (possibly) the year 267.

Believe it or not, her feast is an awesome opportunity to break out some fireworks on a day other that the Fourth of July! As the patron of firework manufacturers, families can remember St. Barbara by getting together and having a fun (and safe) time with fireworks or firework-related entertainment. Sparklers, noise makers, and all the other things that we typically break out to celebrate our nation’s birth? Let’s break them out in honor of St. Barbara!

Baptism of your children

Sure, this isn’t an official feast day, but you don’t want to miss a really fun opportunity to celebrate the faith with the family on the anniversary of our children’s Baptism!

If you’re like me, you need to set a recurring annual reminder to help you remember to prepare the celebration, but it’s totally worth it.

Telling the story of your child’s baptism (our first, for instance, filled his diaper seconds before everything got started, and all the other babies had to wait as I sprinted out to the car to change him), celebrating with a small treat like a cupcake or cookies, and of course, busting out their baptismal candle to light up and have them blow out.

It’s an easy, yet fantastic, opportunity to keep the importance of Baptism and our faith alive in your family, and kids always love a good excuse to party!

If our kids are going to keep the faith we’re working so hard to raise them in, staying Catholic all year is an important step. Let’s take a deep breath from our overly busy schedules, and start celebrating our faith with them!