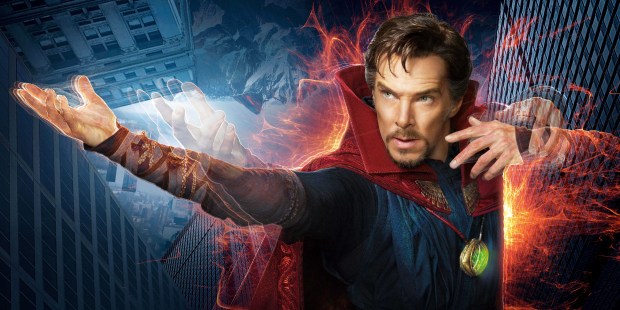 Scott Derickson’s new film, Doctor Strange, has received rave reviews for its special-effects, its compelling storytelling, and the quality of its actors, but I would like to focus on the spirituality implicit in it. Doctor Strange is far from a satisfying presentation of the spiritual order, but it represents a significant step in the right direction, which proves especially helpful for our time.

Played by the always splendid Benedict Cumberbatch, Dr. Strange is dashing, handsome, ultra-cool, a brilliant neurosurgeon called upon to handle only the most delicate and complex surgeries. He is also unbearably arrogant, pathologically self-absorbed, utterly dismissive of his colleagues, something of a first-class jerk. While racing in his Lamborghini to an evening soiree, he runs his car off the road and suffers grievous injuries to his hands. Despite the heroic efforts of the best surgeons, his fingers remain twisted, incapable of performing the operations which made him rich and famous.

In his desperation, he travels to a mysterious treatment center in Kathmandu, where people with horrific and irreversible physical damage have, he hears, been cured. There he confronts a bald-pated female figure, played by Tilda Swinton, who claims that she has healed severed spinal cords through the manipulation of spiritual forces. When he hears this, the rationalist Dr. Strange explodes in anger and, poking her in the chest, asserts his conviction that matter is all there is and that we human beings exist for a brief moment in the context of an indifferent universe. With that, she shoves him backward and, to Dr. Strange’s infinite astonishment, his astral body suddenly leaves his ordinary body. This is his introduction to a world that he never knew existed, and the beginning of his mystical apprenticeship. By the way, if you want a compelling Christian take on this phenomenon, look at Fr. Robert Spitzer’s musings on “trans-physical consciousness,” or in more ordinary language, the “soul.”

What I particularly liked about this confrontation in Kathmandu is how it represents a challenge to the comically arrogant scientism of our time, by which I mean, the fallacy of reducing all forms of knowing to the scientific manner of knowing. This attitude, though widespread today through the influence of the “new” atheists, is utterly self-refuting. How, precisely, did the advocate of scientism see, measure, or empirically verify through experimentation the truth of the claim that only empirically measurable things are true? Though as I say widely held in many circles today, this crude attitude was not characteristic of the founders of the modern sciences, many of whom—Descartes, Copernicus, Galileo, and Newton come readily to mind—were devoutly religious, nor was it embraced by such key scientific figures as Gregory Mendel, an Augustinian friar, or Georges LeMaitre, the formulator of the Big Bang theory of cosmic origins and a Catholic priest. The coolly arrogant but hopelessly narrow Dr. Strange is an apt representation of the clueless advocates of scientism on the contemporary scene, those who have simply closed themselves off to what a thousand generations of human beings have taken for granted.

In order to participate in the dynamics of the higher world, Dr. Strange has to go through a lengthy and demanding training, not unlike, his master explains, the formation he went through to become a neurosurgeon. But now he has to leave his ego aside and surrender to something he can’t entirely understand. This disciplining of the grasping self, of course, is at the heart of monastic and spiritual traditions the world over. Therefore, in the measure that it reminds young people that there is more to reality than meets the eye and in the measure that it encourages them to embark upon a properly spiritual path, Doctor Strange performs, I would argue, an important service.

However, all is not well with this film from a spiritual point of view, for it stops, as many contemporary movies do, at a sort of way station to the real thing. As does Star Wars, which also features a young man going through a needed apprenticeship, Doctor Strange initiates us into a fundamentally Gnostic space, a realm of spiritual powers, both good and evil, engaged in a relentless and never-ending struggle. Dark and light side of the Force, anyone? And its basic game is the learning of spells and incantations—secret gnosis, or knowledge—that will enable one to manipulate the higher powers to a good purpose. To be sure, there are elements of the biblical story in Doctor Strange, as there are in Star Wars — for instance the theme of salvific suffering and embrace of mission on behalf of others. But Gnostic visions always miss the essential teaching contained in biblical revelation, namely that God is a personal power, who can never, even in principle, be manipulated by us and who reigns supreme and victorious over any and all powers of evil at work in the cosmos. The point of the spiritual life, on the biblical reading, is not to control the powers through knowledge, but to surrender in faith to the purposes of God and to accept from God a mission to incarnate his love in the world.

I’m sure it’s asking too much to expect escapist popcorn movies to get biblical spirituality right. And if Doctor Strange can beguile young people out of a deadening and self-contradictory scientism, opening them to a world beyond ordinary experience, I say “two cheers for it.”