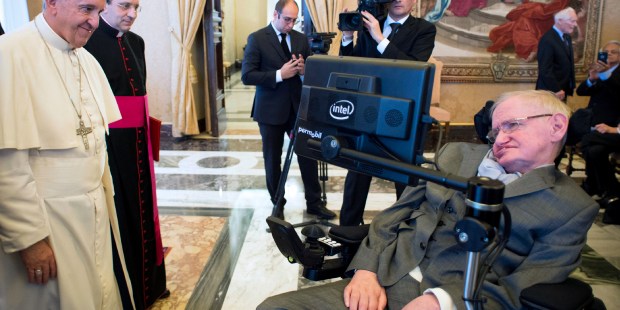 The meeting was cordial, in spite of their diametrically opposed views regarding the existence of God.

[A surprising encounter took place between the pope, who holds that God’s mercy is infinite, and a scientist who rejects the existence of God due to the infinity of the Universe. On December 2, Stephen Hawking participated in a conference in Rome on the Big Bang, today considered the most widely accepted theory for the origin of the universe—a theory proposed by the Catholic priest Georges Lemaître (1894-1966) in 1927. ]

Pope Francis and Stephen Hawking: Faith and reason reach out to each other

British scientist Stephen Hawking and Pope Francis met face to face on November 28 in the Vatican, just days after that renowned astrophysicist had confidently declared that asking “what was before the Big Bang” is meaningless, since it “is like asking what lies south of the South Pole.”

The meeting between these two charismatic figures, world-renowned representatives of the Catholic Faith (Francis) and of reason based on scientific knowledge (Hawking), was rare but cordial, although they have completely opposite stances regarding the idea of God.

Pope Francis considers God to be an infinitely merciful Father, greater than the Universe He created — the same Universe that Hawking has been studying for decades and which he believes arose from nothing, without divine intervention.

Hawking stated that “the discovery of the expansion of the Universe” — the “big bang” theory —  has been one of the “most important intellectual discoveries” of recent times. However, “With James Hartle from the University of California, I worked out what physical conditions the early universe must have, if space-time had no boundaries in the past. Our model became known as the ‘No-Boundary Proposal,'” said Hawking, during the Science and Sustainability conference organized by the Pontifical Academy of Sciences at the Casina Pio IV in the Vatican.

Although the Big Bang is a well-accepted theory among experts, and it is fundamental for the formation of galaxies and planets, there is still no convincing answer to what happened before the explosion, what caused it, and consequently the reason for existence. Nevertheless, the theory fits into a logical explanation of the universe. “The message of science is that we are the children of logic and not of chaos,” explained Italian nuclear physicist Antonino Zichichi, a colleague of Hawking, in an interview with Vatican Radio.

Pope Francis and the Big Bang

In a discourse in October of 2014 to a Plenary Session of the Academy of Sciences, Pope Francis—not biting the “apple of discord” between faith and science—affirmed that the Big Bang is an act of God’s love.

Similarly, he holds that science and its discoveries do not deny the existence of God; on the contrary, evolution (for example) is part of God’s design for His creation.

“Creation has been progressing for centuries and centuries, millennia and millennia, until becoming as we know it today, precisely because God is not a demiurge or a magician, but the Creator who gives life to all beings.

“The beginning of the world was not a work of chaos that owes its origin to another, but derives directly from a supreme Principle who creates out of love.

“The Big Bang theory, which is proposed today as the origin of the world, does not contradict the intervention of a divine creator but depends on it. Evolution in nature does not conflict with the notion of Creation, because evolution presupposes the creation of beings who evolve,” Francis explained.

The miracle of Stephen Hawking’s life

Stephen Hawking, one of the most respected scientists in the world, has a different opinion. In 2010, in his book The Grand Design, he argues that the universe arose spontaneously on its own, and that behind it lies physics with its laws, leaving God out of the explanation of the origin of life.

In his book, this famous astrophysicist and cosmologist openly declares himself an atheist. He describes religion as believing in miracles, in contrast to the scientific method. “There is no God,” he insists.

Nonetheless, Hawking is something of a miracle from a scientific perspective. Inexplicably, he is still alive at the age of 73 after being diagnosed at 21 with Amyotrophic Lateral Sclerosis (ALS), a degenerative disease that causes muscular paralysis.

The medical prognosis was that he would live no longer than two or three years. On the contrary, Hawking married, has children, and travels around the world to give conferences. Currently, he can move his eyes and cheeks, which allow him to control a computer to communicate through a voice synthesizer. With his robotic accent, he insists that science will someday explain the principle of life.