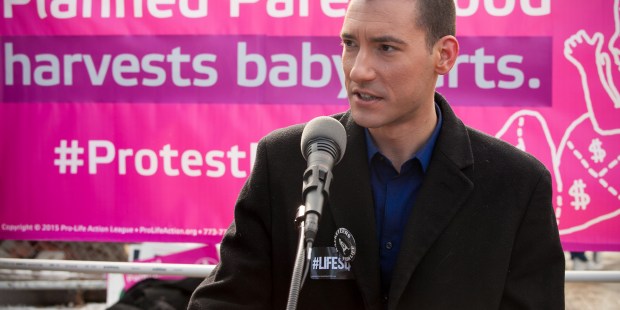 The chairman of the US Senate Judiciary Committee, Charles Grassley, has referred several Planned Parenthood affiliates and companies involved in fetal tissue transfers, as well as the Planned Parenthood Federation of America, to the FBI and the Department of Justice for investigation and possible prosecution.

Grassley’s action coincided with an investigation his committee conducted that showed that Planned Parenthood and other groups profited significantly from the sale of human fetal body parts.

“I don’t take lightly making a criminal referral.  But, the seeming disregard for the law by these entities has been fueled by decades of utter failure by the Justice Department to enforce it,” the Iowa Republican said.

Grassley’s committee analyzed more than 20,000 pages of documents provided voluntarily by the organizations and companies involved.  The committee acknowledged that a 2015 undercover video sting operation against Planned Parenthood, conducted by the Center for Medical Progress, was the “impetus” for its investigation. But it said that its analyses and findings were based on its own investigations, not those of the CMP.

The report concluded that since 2010, three companies—Advanced Bioscience Resources, Inc.; StemExpress, LLC; and Novogenix Laboratories, LLC (which has since gone out of business)—have paid affiliates of Planned Parenthood Federation of America to acquire aborted fetuses, and then sold the fetal tissue to their respective customers at substantially higher prices than their documented costs.

In the wake of nine videos the Center for Medical Progress published, Planned Parenthood claimed that any fees they received for body parts obtained from aborted babies were to cover costs. The new report calls that claim into question:

For example, on one day in June 2014, the ABR technician [whose salary was $15 an hour] obtained a 20 week old fetus at a [Planned Parenthood] clinic. From that one fetus, ABR sold its brain to one customer for $325; both of its eyes for $325 each ($650 total) to a second customer, a portion of its liver for $325 to a third customer; its thymus and for $325 and another portion of liver to a fourth customer; and its lung for $325 to a fifth customer. These fees are merely the service fees for the specimens themselves; ABR separately charged each customer for shipping, disease screening, cleaning and freezing, as applicable. So from that single fetus for which ABR paid a mere $60, ABR charged its customers a total of $2,275 for tissue specimens, plus additional charges for shipping and disease screening.

In another case cited by the 500-plus page report, a technician dissected four fetuses in one morning. The body parts that were harvested that day fetched a total of $6,825, not including fees for shipping, disease testing, cleaning and freezing.

Commenting on the Senate committee report, filmmaker Phelim McAleer (“Gosnell—The Untold Story of America’s Most Prolific Serial Killer”) noted that it does not say where the body parts were going.

“But presumably they went to universities across the nation,” McAleer said. “Did none of the highly paid ethics officers at these institutions raise any concern about the large sums of money being paid for the brains, legs, eyes and skin of babies?”

Grassley referred the case to FBI Director James Comey and Attorney General Loretta Lynch. Lynch, however, will be retiring on Jan. 20, when Donald J. Trump is inaugurated president. Trump’s pick for her successor, Sen. Jeff Sessions of Alabama, currently sits on the Judiciary Committee.