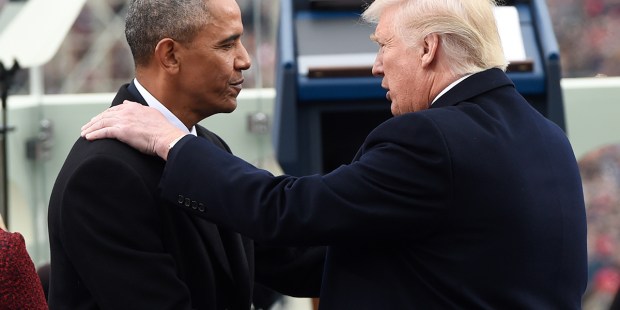 These presidents founded, healed, challenged and undoubtedly inspired our nation to ceaselessly strive to be our best selves.

It would be easy to miss.

After all, this year’s election season seemed unprecedented for its acrimony and vitriol. Name-calling and aspersions, cattiness and condescension were apparent at every turn of the Republican and Democratic primary campaigns, only to be outdone by the general election.

So it would be easy to miss what was truly happening on January 20.

In a world shaken by the despotic Vladimir Putin, Kim Jong Un and Bashar al-Assad – on a planet riven by dictators, plutocrats and demagogues – something profound occurred on that cold day in January. For the 45th time in American history, the most powerful person in the world handed his power, his control, his supreme role to another. And not a shot was fired.

Given the power and influence at stake in such a transition, it is remarkable that it happens not only without violence, but with a surprising degree of civility. Just consider, Donald and Melania Trump, Barack and Michelle Obama, Bill and Hillary Clinton (not to mention George and Laura Bush as well as Jimmy and Rosalynn Carter!) sat next to each other before hundreds of thousands of people, exchanged pleasantries, paid gratitude and offered congratulations in spite of a recent history of mutual raucous eviscerations.

Now, this doesn’t mean that bygones are bygones or that President Trump, President Obama and Secretary Clinton will soon be attending operas or having dinner together a la Antonin Scalia and Ruth Bader Ginsberg. Nor does it mean that their followers will soon patch up their noisy and violent disagreements.

But every four years on Inauguration Day, if only for a few hours, the guns of political war are stilled. A country founded on a vision of freedom and fulfillment, yet tempered by a keen self-awareness of its leaders’ (and citizens’) fallibility takes this day to pause and behold. In so doing, we remember where we have been, who are and who we ought to be.

So where have we been? Who are we? And who ought we be?

It is a question reflected on by presidents and citizens since the inception of our nation. So perhaps it is proper to let the presidents who have led America through Revolutionary War, Civil War and Cold War – who have healed deep divisions, galvanized brave forces, and reminded us of our duties, not just our rights – let these leaders answer these questions. By perusing the Inaugural Addresses of years past, I drew from six presidents who thoughtfully and poetically reflected not simply on our nation, but on our nature as human beings. Threaded throughout their addresses we find deep themes calling us to greatness, recalling our reliance on God, championing our rootedness in principle and reminding us about our necessity to serve. These presidents founded, healed, challenged and undoubtedly, inspired our nation to ceaselessly strive to be our best selves.

“It would be peculiarly improper to omit in this first official Act, my fervent supplications to that Almighty Being who rules over the Universe, who presides in the Councils of Nations, and whose providential aids can supply every human defect, that his benediction may consecrate to the liberties and happiness of the People of the United States…. No People can be bound to acknowledge and adore the invisible hand, which conducts the Affairs of men more than the People of the United States. Every step, by which they have advanced to the character of an independent nation, seems to have been distinguished by some token of providential agency.”

“I shall often go wrong through defect of judgment. When right, I shall often be thought wrong by those whose positions will not command a view of the whole ground. I ask your indulgence for my own errors, which will never be intentional; and your support against the errors of others, who may condemn what they would not if seen in all its parts.”

“With malice toward none, with charity for all, with firmness in the right as God gives us to see the right, let us strive on to finish the work we are in, to bind up the nation’s wounds, to care for him who shall have borne the battle and for his widow and his orphan, to do all which may achieve and cherish a just and lasting peace among ourselves and with all nations.”

“We know that self-government is difficult. We know that no people needs such high traits of character as that people which seeks to govern its affairs aright through the freely expressed will of the freemen who compose it. But we have faith that we shall not prove false to the memories of the men of the mighty past. They did their work, they left us the splendid heritage we now enjoy. We in our turn have an assured confidence that we shall be able to leave this heritage unwasted and enlarged to our children and our children’s children. To do so we must show, not merely in great crises, but in the everyday affairs of life, the qualities of practical intelligence, of courage, of hardihood, and endurance, and above all the power of devotion to a lofty ideal, which made great the men who founded this Republic in the days of Washington, which made great the men who preserved this Republic in the days of Abraham Lincoln

“All [our work] will not be finished in the first one hundred days. Nor will it be finished in the first one thousand days, nor in the life of this Administration, nor even perhaps in our lifetime on this planet. But let us begin. In your hands, my fellow citizens, more than mine, will rest the final success or failure of our course. Since this country was founded, each generation of Americans has been summoned to give testimony to its national loyalty. The graves of young Americans who answered the call to service surround the globe. Now the trumpet summons us again – not as a call to bear arms, though arms we need – not as a call to battle, though embattled we are – but a call to bear the burden of a long twilight struggle, year in and year out, “rejoicing in hope, patient in tribulation”–a struggle against the common enemies of man: tyranny, poverty, disease and war itself.”

“It is time for us to realize that we’re too great a nation to limit ourselves to small dreams. We’re not, as some would have us believe, doomed to an inevitable decline. I do not believe in a fate that will fall on us no matter what we do. I do believe in a fate that will fall on us if we do nothing. So, with all the creative energy at our command, let us begin an era of national renewal. Let us renew our determination, our courage, and our strength. And let us renew our faith and our hope. We have every right to dream heroic dreams. Those who say that we’re in a time when there are not heroes, they just don’t know where to look. You can see heroes every day going in and out of factory gates. Others, a handful in number, produce enough food to feed all of us and then the world beyond. You meet heroes across a counter, and they’re on both sides of that counter. There are entrepreneurs with faith in themselves and faith in an idea who create new jobs, new wealth and opportunity. They’re individuals and families whose taxes support the government and whose voluntary gifts support church, charity, culture, art, and education. Their patriotism is quiet, but deep. Their values sustain our national life. I have used the words “they” and “their” in speaking of these heroes. I could say “you” and “your” because I am addressing the heroes of whom I speak—you, the citizens of this blessed land. Your dreams, your hopes, your goals are going to be the dreams, the hopes, and the goals of this administration, so help me God.”

The peaceful transition of power in the world’s most powerful democracy is an event to behold and not to be missed. Nor should we miss some of history’s greatest inaugural addresses. We are edified by lofty words that remind us who we are called to be to our nation and to one another. Let us remember that in the face of cynicism, pain and bitterness, the high aims of our democracy and the soaring ideals articulated by our leaders are worthy of pursuit. Perhaps it would be best for us to take Abraham Lincoln’s words to heart:

“With malice toward none, with charity for all, with firmness in the right as God gives us to see the right, let us strive on to finish the work we are in…”

May God bless the United States of America.