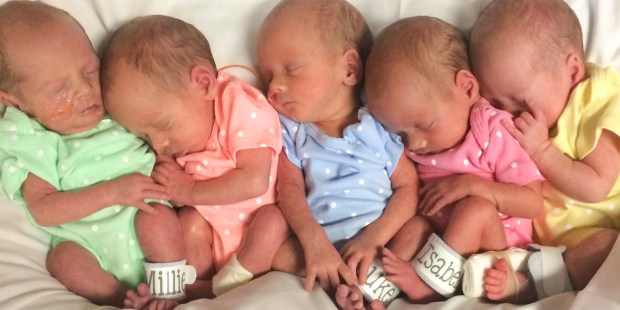 After marrying at the University of Virginia in 2011, Margaret and Michael Baudinet were eager to start a family. After the long-awaited news of a pregnancy and subsequent miscarriage, the Virginia-based couple decided quitting wasn’t the answer. They made another visit to the doctor who suggested they take fertility medication to increase their chances of pregnancy. When a test soon came back positive, they were elated, but at their first ultrasound appointment the couple’s happiness turned to astonishment. Margaret had conceived at least four — maybe five — children.

Turns out it was five. And since the odds of all the fetuses making it to a point of a viability without major medical problems were low, the Baudinets were advised to abort all but two (called “selective reduction” in medical terminology). This deeply troubled them, but they were also grieved by the idea that all of the babies could die. In a blog post about that stage of their journey, Margaret wrote:

We agreed to take the weekend to think it over. Michael went to meet with his priest and I met with the pastor at my church. We both spent time in prayer and meditation. We were both, of course, terrified that we wouldn’t be able to agree (…) On my drive to work the next day, I felt as if God was asking me to do one thing. He wasn’t asking me to be brave or to know all the answers or to please everyone in this process. No. God asked me to surrender. Surrender. Physically, mentally, spiritually. God asked me to surrender. To me, this meant that we would keep all five babies and let God determine their fate.

Michael then came cross a story in Newsweek about a doctor in Phoenix, AZ named Dr. John Elliott, who specializes in saving multiples. He has a reputation for getting women to longer-than-average gestation times and reducing the risk of physical/mental handicaps. No other doctor the couple could find had more experience with high order multiples. All of Dr. Elliott’s patients raved about him. The couple contacted him and he called back, spending an hour with them on the phone.


“Dr. Elliott was the first doctor who didn’t tell us that keeping the quints meant that we would ‘hope for the best,’” wrote Margaret in another blog entry. “Instead, he had the attitude that ‘this can be done.’ While he did not sugarcoat the risks, he explained that he could help the pregnancy succeed. It would not be easy, but it could be done.”

The Baudinets’ goal was to make it to 30 weeks, though Dr. Elliott wanted it to be 34. The couple made plans to move temporarily to Phoenix so they could be under the care of Dr. Elliott and the staff at St. Joseph’s Hospital. Their friends and family rallied to help.

Margaret was scheduled for a C-section on December 17, at 34 weeks gestation, but the babies had a different plan and arrived 13 days earlier on December 4. With joy, Margaret and Michael welcomed Ava Louise, Clara Catherine, Camille “Millie” Whitney, Isabelle Frances, and Luke Thomas. Each was released after some time in the PICU (Pediatric Intensive Care Unit) — with the last of the five released on January 8, one week before the family left Arizona.

While feeding and caring for the five newborns requires a team — which currently includes both grandmothers — the next big challenge after the babies were out of the hospital was how to get them from Phoenix back to Virginia. A car ride was too long and bumpy, and a plane ride could expose the babies to dangerous germs their systems aren’t ready to handle. Through some connections Moggie found a generous friend willing to donate a private jet.

“We caused quite a spectacle with our five car seats, dog, and three adults piling onto this luxurious jet,” wrote Margaret on January 20. “Many heads turned as we transferred car seat after car seat out of the car and into the plane. The kids did SO well on the plane—it must’ve been that excellent care!”

Michael’s father, Charlie Baudinet, flew back to Phoenix to retrieve the couple’s car and drive it back to Virginia. “The next order of business is to convince Nissan to make a donation of a Nissan NV Passenger van!” he said.


While these early days of adjustment are daunting, two au pairs will arrive in February, which will hopefully bring some relief to the family, especially when Michael returns to work.

“We take it one day at a time, trusting that God isn’t giving us anything we can’t handle,” says Michael. Margaret adds, “Throughout this process, we’ve heard God simply ask us to surrender. To His will and His choice. God assured us that He would take care of the rest…”

Amidst the current chaos, there is amazement and gratitude for the tremendous blessing the Baudinets have received — for five healthy and beautiful babies, first of all — but also for the tremendous support and generous help so many have provided. “We are very grateful for all the prayers and help that we’ve gotten and that God has taken us this far,” says Michael. In a recent blog update, Margaret wrote:

There are no words to be able to tell you how supported I feel. Thank you. From my parents’ friends from high school to my friends from my hometown to our new friends in Cville to nurses in the NyICU at St. Josephs, thank you for your generosity and love. I believe it’s Proverbs 22:9 that says the “generous will themselves be blessed.” God bless you, generous ones, we are so grateful.