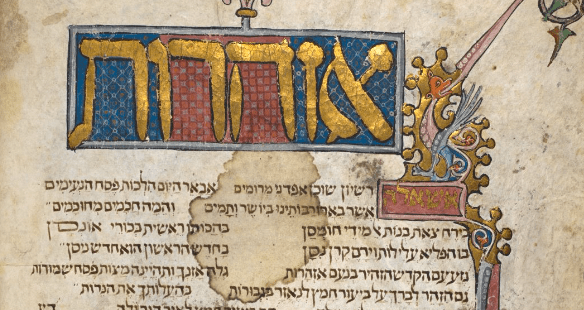 One of the most cherished pieces of the British Library Hebrew Manuscripts Collection has been carefully digitized and is now available to anyone with an internet connection.

The Haggadah is the Jewish text read during the Passover Seder, the ritual feast in which the story of the liberation of the Israelites from slavery in ancient Egypt is told. Reading the Haggadah at the Seder table fulfills the commandment that demands every generation to “tell their sons” the story, as stated in the Book of Exodus: “And thou shalt tell thy son in that day, saying: It is because of that which the Lord did for me when I came forth out of Egypt” (Ex. 13, 8). Actually, the term “Haggadah” is commonly also applied to the act of “telling your son.”

Now the Golden Haggadah, a 14-century manuscript written — and illuminated — around 1320 in Catalonia, has been digitized as part of the Hebrew Manuscripts Digitalization Project of the British Library. As the British Library’s collection is one of the biggest and finest of the whole world — it preserves around 1300 pieces, including Torah scrolls, scientific texts, astronomical treatises, philosophical manuscripts and more — the importance of the digitalization project is quite evident.

If you want to take a look at the digitized manuscripts, click here. And if you want to learn more about the Golden Haggadah, make sure you visit this great post published by Medievalists.net.