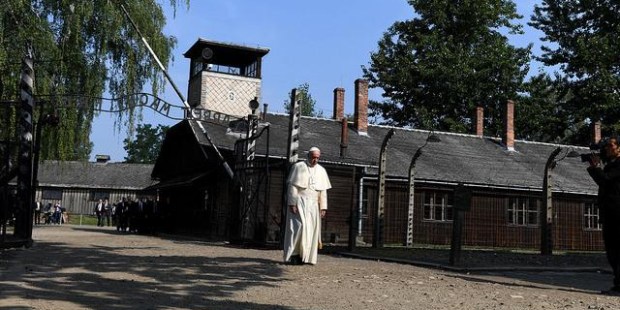 Safeguarding gift and dignity of human life, “from conception to death,” is best resistance against violence

VATICAN CITY — In an address to the Anti-Defamation League on Thursday, Pope Francis denounced what he called “widespread” anti-Semitism in the world today, and reaffirmed the Catholic Church’s commitment “to repel” such tendencies.

Speaking in the Hall of Popes in the Vatican this morning, the pope recalled his visit last year to the Auschwitz-Birkenau extermination camp, saying: “There are no adequate words or thoughts in the face of such horrors of cruelty and sin; there is prayer, that God may have mercy and that such tragedies may never happen again.”

“Whereas the culture of encounter and reconciliation engenders life and gives rise to hope, the ‘non-culture’ of hate sows death and reaps despair,” he said.

Recalling his predecessor, John Paul II, Pope Francis said “memory” must “play its necessary part in the process of shaping a future in which the unspeakable iniquity of the Shoah will never again be possible” (Letter on the Occasion of the Publication of the Document “We Remember: a Reflection on the Shoah”, 12 March 1998): a future of genuine respect for the life and dignity of every people and every human being.”

“Sadly,” he continued, “anti-Semitism, which I again denounce in all its forms as completely contrary to Christian principles and every vision worthy of the human person, is still widespread today. I reaffirm that ‘the Catholic Church feels particularly obliged to do all that is possible with our Jewish friends to repel anti-Semitic tendencies’ (Commission for Religious Relations with the Jews, The Gifts and the Calling of God are Irrevocable, 47).”

Reminiscent of Mother Teresa’s 1994 speech at the US National Prayer Breakfast, the pope then said the most effective way to fight the “non-culture” of hate is by caring for the most vulnerable.

“Caring for the sacred gift of all human life and safeguarding its dignity, from conception to death, is the best way of preventing every type of violence,” he said.

“Faced with too much violence spreading throughout the world, we are called to a greater nonviolence, which does not mean passivity, but active promotion of the good. Indeed, if it is necessary to pull out the weeds of evil, it is even more vital to sow the seeds of goodness: to cultivate justice, to foster accord, to sustain integration, without growing weary; only in this way may we gather the fruits of peace.”

Pope Francis encouraged the ADL in this work, “in the conviction that the best remedies against the rise of hatred consist in making available the means necessary for a dignified life, in promoting culture and favoring religious freedom everywhere, as well as in protecting believers and religions from every form of violence and exploitation.”

Giving thanks for “the sincere friendship and fraternal sentiments which today inspire Jews and Catholics, the pope concluded, saying: “Upon our shared commitment and our journey of friendship and fraternal trust, I invoke the Almighty’s blessings: in his munificence may he accompany us and help us to bring forth the fruits of goodness. Shalom alechem!”

Founded in 1913, the Anti-Defamation League is an international Jewish NGO based in the United States. Describing itself as “the nation’s premier civil rights/human relations agency,” the ADL states that it “fights anti-Semitism and all forms of bigotry, defends democratic ideals and protects civil rights for all,” doing so through “information, education, legislation, and advocacy.”