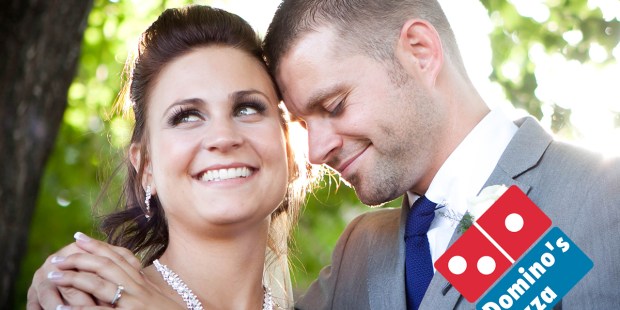 Forget the fragile crystal and the caviar forks; now couples can sign up for pizza with everything

This Sunday, February 12, is World Marriage Day, an observance of the joys and strengths of matrimony sponsored by Worldwide Marriage Encounter. On this Sunday many Catholic parishes will honor the commitment of couples married for 10, 25, even 50 or more years.

We’re betting that the majority of long-married couples, were they to be asked which of their wedding gifts best summed up the realities of married life, would not mention the 6 fondue pots, the monogrammed towels, or the silver sugar tongs. The gifts of marriage and family life are measured in simpler terms: time together, mutual celebration and support, the day-to-day-ness of living out the vows.

That’s why we applaud a move announced this week by Domino’s, the pizza giant founded by Michigan Catholic Tom Monaghan (who met his wife while delivering pizza). As reported in USA Today by Zlati Meyer of the Detroit Free Press, Domino’s now offers prospective brides and grooms the opportunity to add pizza to their wedding gift registries. It’s obviously an inspired marketing move by the chain:

“Our registry aims to bring couples together over their shared love of pizza,” spokeswoman Jenny Fouracre said in a statement. “We hear often from customers that Domino’s was a part of their big day, from proposals to after-hours meals at their wedding. We wanted to make it easier for people to ask for and receive something that they’ll really use.”

The chain, based in Ann Arbor, Mich., is offering e-gift cards of various denominations, so friends and family can treat the couple to everything from food for a bachelorette party to a post-nuptials date night. Examples of packages include “Bust Out the Fine China” and “The Wedding Night.”

Pizza gift cards range from $20 to $100, according to the registry Web site. The recipients may order whatever combination of food they want.

The addition of a pizza gift registry is being well received by couples who have moved away from the traditional upmarket department stores to more budget-conscious choices like Bed, Bath & Beyond for their household registries. Bride Laura Krahel, 24, explains why:

“I just thought it was really fun. We order pizza all the time and we make pizza at home. We have a regular registry and I know a lot of groomsmen who’d want to give Curtis this gift instead of maybe buying something for the kitchen,” said the advertising executive, who’s getting married in June.

Krahel even has a great suggestion for the perennial “too many of the same gift” problem. “We might get a lot of pizza,” she concedes, “but that might be awesome. We can share with all our guests or our bridal party or we could donate it.”

Marriages may start out with Champagne toasts and chocolate fountains, but over the years they will more often include casseroles made from leftovers, 3 a.m. snacks clutched in one hand while walking the floor with a teething baby, kid-made breakfasts in bed (complete with maple-syrup hugs) and warmed-up dinners after a second shift. There will be gourmet delights along the way, but also the bread of sorrow and the water of tears.

Given that realization, a little pizza – a reminder of the lifelong importance of making time for date nights and enjoying simple pleasures – doesn’t seem like a bad gift from family and friends to mark a wedding day.