The day the architect of a church tricked the devil 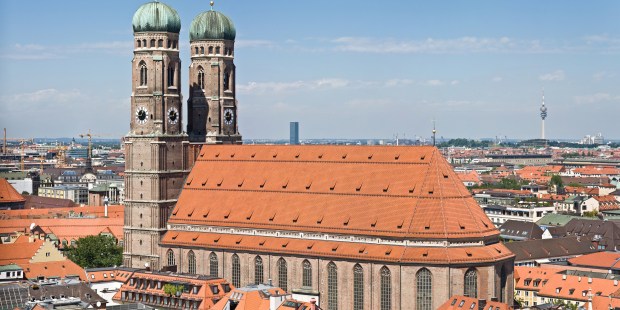 At the entrance of Munich’s Frauenkirche, a strange footprint is the stuff of legend

As soon as one enters the Cathedral of Munich, better known by locals as the Frauenkirche (“Our Lady’s Church”), one can see a footprint at a point of access to the central nave. It is the (in)famous “devil’s footprint.” And around it, a story featuring Jörg Von Halsbach, the cathedral’s own architect, has been woven and passed on through the ages.

Legend has it that Halsbach, as soon as he received the commission for the construction of the cathedral, was forced to make a pact with the devil, out of sheer need. Some sources claim he was falling short of funds to complete his task. Some others say the devil often intervened in the construction of cathedrals, causing accidents that would delay the work for centuries. In any case, the devil helped Halsbach under the condition that his cathedral should not have any windows, so neither natural nor divine light could enter the building. If he failed to build such structure, Halsbach would have to turn his soul over to the devil.

The devil was certain he had the best of the bargain, knowing that building a cathedral without windows is like building a car without wheels. But Halsbach managed to finish the cathedral in just 20 years, which is exceptional if we take into account that a cathedral could take several generations to complete.

When the cathedral was finished, the devil stood at the entrance of the Frauenkirche (the devil cannot walk into a holy building, for obvious reasons) and, indeed, could not see any window. At least not from where he was standing. The large stained glass window behind the altar was covered by an immense altarpiece, and Halsbach was ingenious enough as an architect to arrange the internal columns of the cathedral so that they would seem to overlap as if they were a wall, hiding the beautiful stained windows.

The devil departed the place deceived and frustrated, leaving his mark precisely at the point where the windows cannot be seen. And clever Jörg Von Halsbach kept his soul.