Vatican and Muslim officials to meet in Cairo, focus on countering extremism 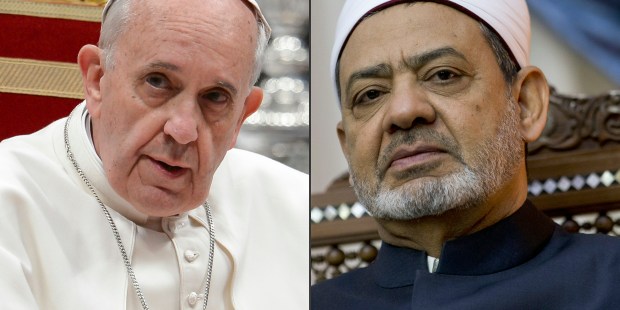 The President of the Pontifical Council for Interreligious Dialogue, Cardinal Jean-Louis Tauran, will be in Cairo, Egypt, from Wednesday, February 22 until Thursday, February 23, to attend a seminar at the University of Al-Azhar, the most authoritative academic and theological center of Sunni Islam. The theme of the event is: The role of al-Azhar al-Sharif and of the Vatican in countering the phenomena of fanaticism, extremism and violence in the name of religion.

According to a statement released this morning by the Vatican press office, Cardinal Tauran will be accompanied by the secretary of the dicastery, Archbishop Miguel Ángel Ayuso Guixot, and Msgr. Khaled Akasheh, head official for Islam. The prelate will lead the Catholic delegation, which will also include Msgr. Bruno Musarò, apostolic nuncio in Egypt. The meeting will take place, as on previous occasions, on the eve of February 24, in memory of Pope St. John Paul II’s visit to Al-Azhar on that date in 2000.

This is the first joint initiative between the two institutions after the resumption of direct talks, interrupted in 2011 after the bombing of the Coptic Orthodox Cathedral in Alexandria on New Year’s night. On that occasion, Pope Benedict XVI recalled the responsibilities of local authorities in the defense of Christians. The Pontiff’s words were interpreted by both the leaders of al Azhar, and the members of the Coptic Orthodox Patriarchate as an offensive towards faith. Despite the absence of official dialogue, in March 2014 Mahmoud Azab, representative of the Grand Imam of al-Azhar, attended a conference at the Vatican, and signed an interfaith declaration against human trafficking.

The “thaw” took place exactly a year ago, in February 2016, with the visit of a delegation of the Pontifical Council for Interreligious Dialogue to the Egyptian University. The delegation was led by Msgr Guixot, accompanied by the nuncio Musarò. The delegation was received by Abbas Shuman, deputy of the Grand Imam, Ahmad Al-Tayyib.

The historic meeting between Pope Francis and the Grand Imam of Al-Azhar, Ahmad Al-Tayyib followed on May 23, 2016. After this meeting, Msgr Guixot travelled several times to Cairo, where he had several preliminary meetings. On November 12, a coordinating committee tied to the Pontifical Council for Interreligious Dialogue and the Center for the al Azhar dialogue met to organize the seminar starting tomorrow.