What if Marine LePen wins the French elections? 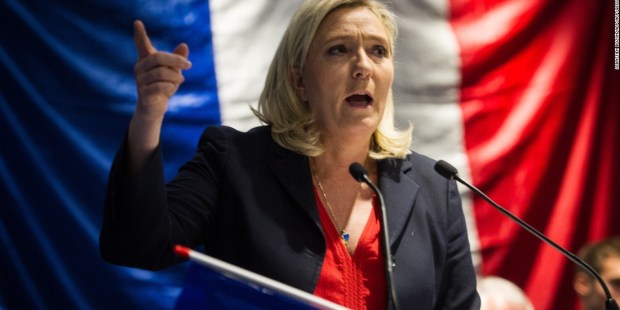 French, European and worldwide consequences of a hypothetical victory of the leader of the French National Front

Will the ultra-nationalist Marine Le Pen win France’s presidential elections? What are the odds? Half of France cannot help but fear the very possibility of it. If the leader of the French National Front reaches the presidency, and applies her program — a program that has been labelled as demagogic, populist and nationalist — changes would not only affect France, but would be felt throughout Europe and, consequently, throughout the world.

If Le Pen wins, France would leave the European Union (EU) and abandon NATO, the treaty that joined together the Atlantic and Mediterranean countries that once faced communism during the Cold War. The Governor of the Bank of France, François Villeroy de Galhau, has claimed that France’s hypothetical abandonment of the euro would cost 30,000 million a year. If France leaves the euro, the European common currency won’t be able to stand it.

The National Front program also plans to turn its back on the IMF, the World Bank and the WTO (World Trade Organization), considering them part of a “hellish machine at the service of ultraliberal ideology.” In 2011 it was reported that Valéry Le Douguet, a leading French mason, drafted the National Front’s Justice program for the 2012 elections.

For this year’s elections, Marine Le Pen has promised 144 “commitments” to her constituency, which, in fact,  cannot be put in practice: they would result in a sharp increase in spending, without a corresponding increase in revenues. France, let’s not forget, is a heavily indebted country (the public debt is up to 2,160.4 billion euros; that is, 97.6 percent of its GDP). It has a very high social expenditure that is now being questioned, in order to bring some balance into the annual budget. The unemployment rate is at 10 percent of the population.

Like other far-right nationalist leaders, Marine Le Pen proposes increasing the number of required police personnel (about 15,000 more men), a reduction in the immigration quota to 10,000 people per year (take into account 227,000 residence permits were granted in 2016) and changing the process that might allow an immigrant to obtain French nationality.

In the social field, Le Pen’s plan includes a lot of “populist” concessions and promises, such as increasing pensions for the elderly, lowering gas and electricity prices by 5 percent, repealing the last passed labor law, maintaining the purchasing power of wages (by taxing imports), maintaining the 35-hour labor week and severing overtime. All of that, while promising to lower income taxes.

Le Pen’s understanding of national identity seemingly aims to reinstate certain policies from the imperial French past, imposing a strict control of the country’s borders, not recognizing minorities and religious communities (thus boosting the idea of France as a lay State), strengthening French high schools and universities all around the world, and increasing the financial aid given to amateur athletes who represent the nation in international competitions.

Economically speaking, Le Pen’s National Front proposes giving the State a major role in national economics (that is, State intervention), fighting against importing goods already produced in France, while imposing greater State control over basic services such as health, education, transport and the like.

So far, in a nutshell, this is the program with which Marine Le Pen presents herself as a candidate for the coming presidential elections.

The ultra-nationalist leader raises all kinds of emotions among the French. She is as hated as she is loved. Today, she is leading in the polls, with the support of 25.3 percent of the French population, especially after the downfall of François Fillon, another right-wing candidate, who was involved in a scandal for paying his wife and children an official salary, even though employing relatives is a common practice among senators, who receive a budget bonus of 125,000 euros per year that they are basically free to distribute as they want. This budget bonus, which was unknown to many French until the Fillon scandal, has raised another scandal on its own.

The only candidate left is Emmanuel Macron, a center-leftist technocrat, who is running himself for the first time in a general election, trying to compete against Le Pen in the second round. The question is if Marine Le Pen has any chance of winning. Of course she does, but if her opponent finds the way to coalesce the votes of all of those who oppose Le Pen (quite a numerous crowd), her defeat might be an ugly one: Le Pen has a limited number of supporters she can reach, because of her non-inclusive program and her racist phobias.

Why have such characters as Marine Le Pen emerged in world politics? Partly because in France as in other countries globalization clashes with a nationalism that aims to restore past glories. The European Union is not exactly “loved” by the Europeans, but it is mostly accepted. In the face of other big economic blocs (the United States, Japan, China, Korea, India and Australia) a continent-wide open market makes economic sense.

If countries as internationally relevant as France were to shift to a policy of isolationism, they would will face serious problems when placing their products in foreign closed markets. Donald Trump, whom Marine Le Pen holds in high esteem, will not necessarily defend the economics interests of France — even though it is one of its NATO allies — simply because, as an American nationalist, he is mainly interested in his own domestic economy.

The reaction to globalization and the status quo has generated political programs that, far from being based on any realistic claims — may they be economic, political or social — are instead built on unrealizable promises that seek to capitalize on the feelings of frustration and the hopes of the people. Certainly, most established powers have not done what they were expected to do. This is the classic recipe for populism, adding some basic ingredients (nationalism, anti-corruption, pro-workforce slogans) to an ongoing social unrest. Populism has invaded Europe as an alternative to globalization and the “distant” power of Brussels and the governments of the 28 European states.

Nationalism, when based not only on the love of one’s own land, but on discrediting other peoples, is no longer acceptable. In his book Memory and Identity (Barcelona, 2005, pp. 87 ff.), St. John Paul II said that he is increasingly in favor of speaking of “patriotism” rather than of “nationalism,” as the latter often implies a lack of solidarity with other nations: “Nationalism,” said John Paul II, “recognizes and pursues only the good of its own nation, disregarding the rights of others. On the contrary, patriotism is the love of one’s own country, understanding every other nation has the same rights one claims for one’s own.”