5 must-see movies about the beauty of sacrifice 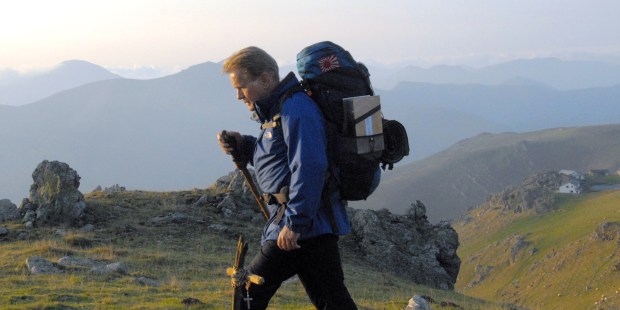 Martin Sheen in The Way, 2010. Archives du 7eme Art | Photo12 | AFP
The Way
Year : 2010 USA / Spain
Director : Emilio Estevez
Martin Sheen.
It is forbidden to reproduce the photograph out of context of the promotion of the film. It must be credited to the Film Company and/or the photographer assigned by or authorized by/allowed on the set by the Film Company. Restricted to Editorial Use. Photo12 does not grant publicity rights of the persons represented.
Share
Print
Paul Asay - published on 03/14/17

It’s the perfect time of year to watch films that inspire us and remind us what life and love are all about.

Movies can sometimes, in their own off-kilter way, inspire us to be better people. Through the strange alchemy of film, we can step into a character’s shoes (however briefly and however safely) and see them practice denial and sacrifice. We can watch them give of themselves, suffer for something greater than themselves, and come to a better understanding of what’s really important.

With the Christian season of Lent in full swing, the following list of five movies seems particularly appropriate to highlight. These are not necessarily Christian movies—in fact, most aren’t overtly spiritual at all. But they’re cinematic models of contemplation and denial, and perhaps through them we can come to a better understanding of who we are and what we can aspire to. (Well, as long as you haven’t given up movies for Lent, that is.)

If you like Robert Redford, this movie’s for you. He’s the only guy we see in this underrated classic. Stranded on a sinking one-man yacht in the middle of a roiling, rolling ocean, Redford (known in the credits only as “our man”) spends most of the movie doing his best to plug the boat up and try to reach land.

On its surface, All is Lost is a simple survival story. (And a word of caution: Of the handful of words we actually hear, one is a pretty notable obscenity.) But drill down a little deeper, and we see a man determined to survive solely through his own devices, his own strength, his own skill. With each passing day spent in this watery wilderness, he’s stripped of those devices until nothing’s left. In his own way, Our Man reaches the point of having to finally trust in providence to save him.

This Oscar-nominated film is rooted in a simple problem: Dr. Ryan Stone (Sandra Bullock) is stranded in space, the most inhospitable wilderness of all. She knows she’s going to die, and not a soul can do anything about it. “Nobody will pray for my soul,” she says. “I’ve never said a prayer in my life. Nobody ever taught me how.” And because she’s still grieving over the death of her daughter, she’s all too willing to drift off into oblivion—to relinquish her abberant life to the cold, empty universe.

But lacking food and water, as well as heat and ground and air itself, Ryan experiences a little miracle. And through that miracle, she finds the will to live. And even though her daughter’s gone, she feels that the little girl’s still, somehow, with her, that death is not the end. In a way, Ryan’s saga—predicated on both space and spirit—ultimately reflects the hope of Easter.

3 ways that the movie ‘Silence’ can challenge your faith

What would years and years of prayer and denial look like? This nearly three-hour documentary might be as close as most of us will ever come. Directed  by Philip Gröning, Into Great Silence takes us to the Grande Chartreuse Carthusian monastery in the French Alps, documenting the monks’ austere, dutiful lives. Like the monks themselves, the film eschews ostentation. There is no voiced-over narration, no captions to explain what we’re seeing. Every moment was shot in natural light. We’re simply ushered into the stark, strangely beautiful world the monks inhabit—a life permeated by spirit and duty—and the result is less a documentary and more a powerful contemplation on meaning and faith.

OK, so I’m cheating a bit here, sticking three movies into a slot meant for one. But really, the whole saga is meant to be taken as one big story—and what a story it is.

For our purposes, let’s focus on the hobbit Frodo, bearer of the One Ring, the Ring that can destroy the world unless Frodo manages to destroy it first. He becomes very much a Christ-like figure during his long journey through Middle Earth. Like Jesus in the desert, Frodo is tempted sorely by the evil Ring, which promises him unimaginable power should he simply slip it on. And like Jesus’ agonizing struggle to Golgotha, Frodo is tortured on his way to Mount Doom: The ring grows heavier with each passing step (which may remind us of the world’s sins and the cross that Christ carried), and eventually he, like Jesus, needs help to finish the journey. Frodo is certainly not an ideal Christ figure: The hobbit goes astray at the very end and needs an unlikely helper to complete the mission. But much of the journey seems to explicitly echo the themes of Lent, a time of trial before the final, glorious victory of Easter.

We have another Lenten-like journey here, but this one is rooted very much in our own world. In it, Tom Avery (played by Martin Sheen) makes a pilgrimage of sorts along the sacred Camino de Santiago, or the Way of St. James, as a way to honor his son who wanted to make the journey but died before he could complete it.

Tom, carrying the ashes of his son, meets an assortment of characters as he walks, each using the Way for their own purposes. One wants to quit smoking; another wants to lose a few pounds; still another wants to shake free of writer’s block. They mirror, in a sense, how we all-too-often approach sacrifice as an excuse to improve ourselves, rather than to grow spiritually. But this motley assortment of pilgrims continues the trek, each coming to a more profound understanding of who they are and what’s really important. By the time they reach the Cathedral of Santiago de Compostela in Galicia, Spain, Tom finds a sense of spiritual peace.