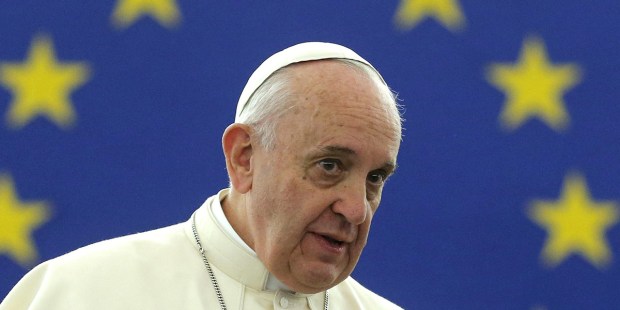 Says tolerance, justice, respect are values that must remain connected to their roots

VATICAN CITY — Today Pope Francis received 27 Heads of State in an historic meeting, commemorating the 60th anniversary of the founding of the European Union.

In his address, the Holy Father reminded leaders that Europe’s soul is Christian, and that the only true way to build “authentically ‘lay’ societies, free of ideological conflicts,” is for Europe to maintain her vital connection to her Christian roots.

Read more:
Is the EU’s Flag Really A Marian Emblem with the Central Figure Removed?

In his address, Pope Francis also turned to issues such as solidarity vs. populism and deeper questions regarding the EU and immigration.

Below are several key passages from Pope Francis’ address to European Heads of State.

The founding fathers [of the EU] remind us that Europe is not a conglomeration of rules to obey, or a manual of protocols and procedures to follow. It is a way of life, a way of understanding man based on his transcendent and inalienable dignity, as something more than simply a sum of rights to defend or claims to advance. At the origin of the idea of Europe, we find “the nature and the responsibility of the human person, with his ferment of evangelical fraternity … with his desire for truth and justice, honed by a thousand-year-old experience.” Rome, with its vocation to universality, symbolizes that experience and was thus chosen as the place for the signing of the Treaties. For here – as the Dutch Minister of Foreign Affairs, J. Luns, observed – “were laid the political, juridical and social foundations of our civilization.”

[The] common denominator [of the founding fathers] was the spirit of service, joined to passion for politics and the consciousness that “at the origin of European civilization there is Christianity,” without which the Western values of dignity, freedom and justice would prove largely incomprehensible. As Saint John Paul II affirmed: “Today too, the soul of Europe remains united, because, in addition to its common origins, those same Christian and human values are still alive. Respect for the dignity of the human person, a profound sense of justice, freedom, industriousness, the spirit of initiative, love of family, respect for life, tolerance, the desire for cooperation and peace: all these are its distinctive marks.”  In our multicultural world, these values will continue to have their rightful place provided they maintain a vital connection to their deepest roots. The fruitfulness of that connection will make it possible to build authentically “lay” societies, free of ideological conflicts, with equal room for the native and the immigrant, for believers and nonbelievers.

Europe finds new hope in solidarity, which is also the most effective antidote to modern forms of populism. Solidarity entails the awareness of being part of a single body, while at the same time involving a capacity on the part of each member to “sympathize” with others and with the whole. When one suffers, all suffer (cf. 1 Cor 12:26). Today, with the United Kingdom, we mourn the victims of the attack that took place in London two days ago. For solidarity is no mere ideal; it is expressed in concrete actions and steps that draw us closer to our neighbors, in whatever situation they find themselves. Forms of populism are instead the fruit of an egotism that hems people in and prevents them from overcoming and “looking beyond” their own narrow vision. There is a need to start thinking once again as Europeans, so as to avert the opposite dangers of a dreary uniformity or the triumph of particularisms. Politics needs this kind of leadership, which avoids appealing to emotions to gain consent, but instead, in a spirit of solidarity and subsidiarity, devises policies that can make the Union as a whole develop harmoniously. As a result, those who run faster can offer a hand to those who are slower, and those who find the going harder can aim at catching up to those at the head of the line.

It is not enough to handle the grave crisis of immigration of recent years as if it were a mere numerical or economic problem, or a question of security. The immigration issue poses a deeper question, one that is primarily cultural. What kind of culture does Europe propose today? The fearfulness that is becoming more and more evident has its root cause in the loss of ideals. Without an approach inspired by those ideals, we end up dominated by the fear that others will wrench us from our usual habits, deprive us of familiar comforts, and somehow call into question a lifestyle that all too often consists of material prosperity alone. Yet the richness of Europe has always been her spiritual openness and her capacity to raise basic questions about the meaning of life. Openness to the sense of the eternal has also gone hand in hand, albeit not without tensions and errors, with a positive openness to this world. Yet today’s prosperity seems to have clipped the continent’s wings and lowered its gaze. Europe has a patrimony of ideals and spiritual values unique in the world, one that deserves to be proposed once more with passion and renewed vigor, for it is the best antidote against the vacuum of values of our time, which provides a fertile terrain for every form of extremism. These are the ideals that shaped Europe, that “Peninsula of Asia” which stretches from the Urals to the Atlantic.